Scams over the phone

At Westpac, we’re vigilant about safeguarding your financial and personal information. Help protects you, your family and your business. Check out the types of scams being used plus some useful tips on how to stay safe.

Financial institutions and Australian government Cyber Security Awareness initiatives are seeing an increase in phone scams where callers claim to be from a reputable organisation requesting information or assistance. Common organisations scammers use to gain your trust include utility companies including telephone and internet providers, financial institutions, software companies, technical support helpdesks or government agencies.

In some reported cases, customers have accidentally visited a fake website that asks you to call a helpdesk after receiving an alarming warning message on screen.

At this point, we strongly suggest hanging up the phone. If you are concerned that the call was legitimate, or there are error messages on your screen that need actioning, call the company on their customer service number. Ensure that you independently source this number through the company’s genuine website, or from a previous bill you have received. Never call a number provided by an unsolicited caller or contained in a computer pop up message.

During the call it is likely you will be advised there is something wrong with your computer. Other variations of this scam include:

Targeted individuals have reported that scammers requested they install remote access software onto their desktop, or mobile phone. Criminals will often use genuine software that allows a remote connection to your device such as Team viewer, Quick Support or Assist Client. The software is designed to allow another user to remote connect to your device and use it just like you can.

The scammer then requests control or access of your computer by using this software. Do not allow scammers to have this access under any circumstances; just hang up.

The scammers actual goal is to gain access to your banking. They will eventually request a payment to be made or ask you to confirm if you have received a deposit from them. Should you be asked to provide payment information or sign into your Online Banking please DO NOT do this. Customers who have been involved in these scams have reported funds were transferred between their own account to give the appearance of a deposit to their account. These have included withdrawals from credit cards, savings accounts and home loans.

You may also be asked to share Westpac Protect™ SMS Codes sent to your mobile. This code should not be shared with anyone. It is used to authenticate payments or access features such as increasing your daily payment limit in Online Banking.

Disclosing your Westpac Protect SMS code - or any Westpac Online Banking access codes - to others contravenes our Terms and Conditions. Doing so may find you liable for any losses due to fraud on your account.

Keep safe from phone scams by:

One morning Phil receives a phone call from a utility provider. He had only spoken to them about an account query recently, so he wasn’t too concerned at this stage.

The caller advises Phil that they have identified a fraudster trying to access his computer and they need his assistance in catching them. Eager to help, Phil follows the caller’s instructions to install some software on his PC.  The caller asks Phil to activate the software so that they can track the fraudster.

They advised Phil they were going to put some money in his cheque account to lure the fraudster out, which he would then just need to repay once they had completed their requirements.

The caller advises they have almost caught the fraudster and asks whether he has received a deposit into his account yet.

Phil checks his online banking and sees his account balance is indeed higher.  The caller then tells Phil he needs to return the deposited funds back to the utility provider. He is advised they do not have an account to pay directly to, so he should withdraw the deposit as cash and repay the utility provider via a money transfer agent.

While waiting for a teller at his local branch, Phil gets a call from Westpac about unusual online banking activity. Phil is unsure what to do as the caller told him not to talk to anyone, not even his bank, about this transaction but when the banker starts to explain some of his recent transactions, he starts to feel uneasy about the caller’s request to withdraw cash from his account.

Unbeknownst to Phil, the caller was not ringing on behalf of a utility provider, but was a scammer, who gained access to Phil’s PC and transferred funds from Phil’s credit card to his cheque account, claiming this transaction was the deposit owed to the utility provider. The software Phil had installed on his PC was ‘remote access software’, which had allowed the caller to access his personal information and take control of his PC. The scammer was able to watch every move Phil made on his PC, including while he was signed into his online banking.

Phil is lucky that Westpac called when they did, and the local tellers were able to assist in reversing the transaction back to his credit card.

If Phil had continued, withdrawn the funds in cash and then transferred this via another payment method, he could have been out of pocket, as the Westpac Security Guarantee may not have applied, as he undertook that transaction himself.

Scammers will try anything to convince you of their story. Below is an example of a scam email received by a customer, in an attempt by the scammers to prove they are legitimate. 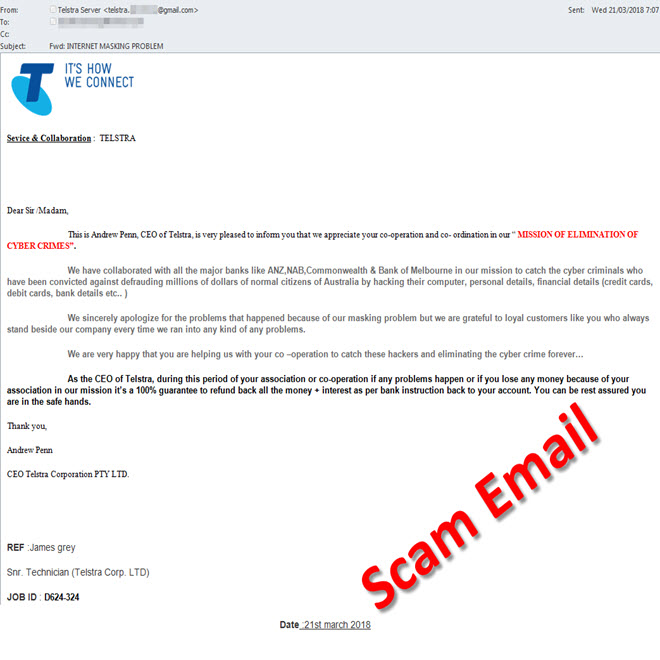