It’s been an unforgettable summer – horrific bushfires devastating large swathes of our amazing land, compounded by floods, cyclones and hailstorms.

The scale of the bushfire tragedy alone is shocking enough – dozens of lives tragically lost, millions of hectares of land destroyed, hundreds of homes razed, and countless wildlife and animals killed. Even in our biggest cities, residents woke to the rare sight of smoke and red haze permeating otherwise fine sunny mornings as fires raged nearby.

While it’s impossible to imagine the impact on people directly affected and the brave men and women battling the blazes, the recent events have clearly impacted the entire nation in a profound way and, unsurprisingly, increased debate about climate change.

That’s not unexpected, and greater analysis and consideration of how we respond to the global challenge of climate change and transition to meet the Paris Agreement is critical. Globally, we are already seeing climate change become one of the key considerations facing some of the world’s largest investors, corporates, philanthropists and institutions, such as BlackRock, Microsoft, Jeff Bezos, the International Monetary Fund, Bank for International Settlements and Bank of England.

In Australia, the Reserve Bank and APRA have stepped up their focus on the risks to the economy and major institutions from climate change, while corporates have been moving apace, alert to their roles in the community and the desire for action from more of their owners, the shareholders.

At Westpac, social and environmental sustainability has long been a priority, reporting on sustainability performance, being the first Australian bank to commit to the Paris Agreement in 2015 and the largest lender of greenfield renewable energy in the country.

As a financial institution, our view is that the best role we can play is to support customers through innovative ways to meet their own climate action plans and assist with the long-term journey towards a net-zero emissions economy. And as our new report done with the Economist Intelligence Unit (EIU) -- Financing sustainability: Asia Pacific embraces the ESG challenge -- shows, there is no shortage of interest in sustainable finance among both corporate issuers and investors.

According to surveys carried out by the EIU, in the next year nearly nine in ten Asia Pacific companies plan to utilise some form of sustainable finance. These deals can be used to fund projects that reduce carbon emissions or have a positive social impact. They can also incentivise companies to improve sustainability performance through linking sustainability targets to the cost of capital, ultimately assisting in the transition towards reaching net zero emissions. Encouragingly, the report found securities and products that have grown in Australia in recent years, such as green loans and bonds and sustainability-linked loans, were tipped to come into wider use in Asia Pacific.

Further, the investors surveyed – portfolio managers, chief financial officers and others – are also bullish and keen to allocate more funds to such sustainable finance deals. It found the share of those allocating a quarter or more of their Asia Pacific assets under management to sustainable projects will rise from 30 per cent to 41 per cent within three years, with the expansion tipped to be “particularly marked” among investors in Australia and New Zealand. 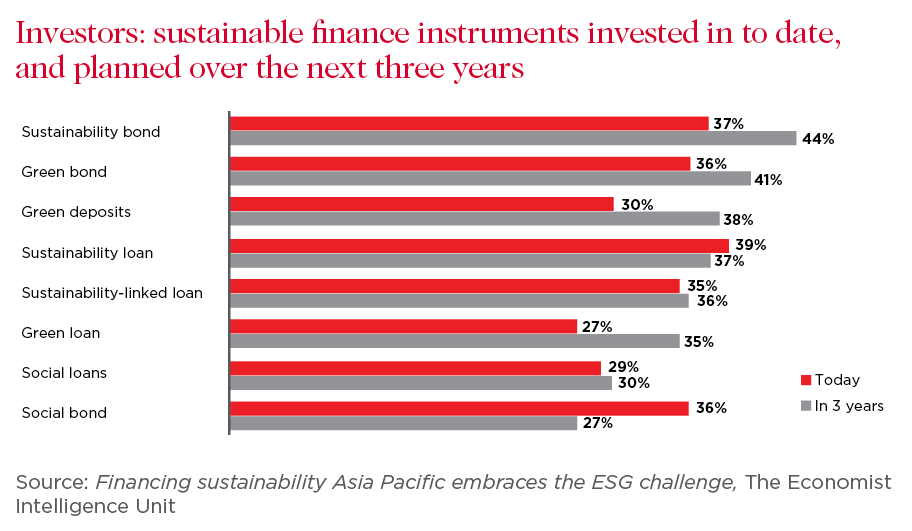 What’s more, more than two thirds of investors and issuers believe sustainable investments and financings perform better than traditional equivalents. While some investors still struggle with the returns from certain transactions, the results overall highlight that sustainable finance is not just good for our communities – it’s also good for business.

These findings are undoubtedly positive for the region, and the world.

As the report highlights, natural hazards resulted in an average $US76 billion of estimated economic damages each year in the Asia Pacific region between 2007 to 2016 – more than double the preceding decade. Aside from the horrible human impacts, this creates a pressing issue – as the fastest growing region in the world powered by economic giants such as China and India, there are rapidly growing infrastructure needs. As such, the increased frequency of natural disasters means it is increasingly important sustainable financing solutions continue to scale so this infrastructure can be green and resilient to changes in climate given the long-dated challenges and uncertainty climate change presents.

But it’s not all about the risks – climate change clearly presents opportunities too.

For the globe, equity analysts at Morgan Stanley have found $US50 trillion of investment is needed in key technologies such as renewables and hydrogen over the next 30 years to achieve net zero emissions and meet the Paris Agreements goal of keeping the rise in temperature below 2 degrees, offering trillions of dollars of potential returns. In East and South Asian cities alone, The International Finance Corporation estimates there’s $US20 trillion of climate investment opportunities between now and 2030.

Given the starting position for sustainable finance in the Asia Pacific region, growth is highly likely.

As the EIU survey shows, only 7 per cent of issuers have used sustainable finance instruments to fund projects, materially below the US and Europe, partly due to less supply of bankable sustainable projects. In addition, a headwind has been the lack of clarity of what qualifies as a sustainable asset, a challenge that requires greater focus given the related issue around investors’ need for assurance about project credentials.

While activity has to date been strongest in renewables and energy efficiency projects, the report points to the need for more projects in other areas around land and water use, and forestry to boost resilience to climate change. On the demand side, investors called out sustainability and green bonds as key areas of focus over the next three years – aligning with the deals issuers say they are most likely to bring to market.

As an aside, the massive transfer of wealth in Asia from baby boomers to millennials in the next decade provides a further tailwind as younger generations prioritise investment in sustainable products across the board, a trend visibly playing out more and more in Australia.

So, with the survey finding that 87 per cent of issuers plan to use sustainable finance in the next year and strong demand from investors, it’s fair to assume activity will increase as the market matures.

While early days, the Asia Pacific sustainable finance market is clearly taking shape. As seen in the more mature markets such as Australia, this path isn’t always easy or done in a straight line, with government policy, transaction costs and expertise other issues for corporates to consider. However, given the scale of climate change and the need for the private sector to play a leading role alongside policymakers, we are willing and ready to continue to play our part in the important growth of sustainable finance in the region.

The enormous opportunity and significant momentum bode well for all.