Inside the $US10 trillion climate opportunity

Whatever one makes of Swedish activist Greta Thunberg, the Extinction Rebellion movement or the underlying cause of more prevalent fires and floods around Australia, the cries for action on climate abatement are resonating across the community.

The hard-headed challenge, however, lies in the sheer investment required to wean the world off its century-old reliance on fossil fuels.

The immensity of the task is highlighted in a recent report from Morgan Stanley, which claims $US50 trillion ($74.7bn trillion) will be required over the next 30 years to achieve the goals outlined in the Paris Agreement.

For context, that much investment will remove 53 gigatonnes of carbon dioxide (or CO2 equivalent) from the atmosphere, and require an annual investment of $US1.6 trillion – more than what was invested across the entire US economy in 2017.

But the stakes are also massive. Apparently if we do nothing, the world will lose the equivalent of 7 per cent of economic activity as a result of flooding, fires and loss of biodiversity. The findings align with the spate of warnings from high profile investors and regulators over summer, the Switzerland-based Bank for International Settlements pointedly calling for a greater alertness to “green swans”, the “potentially extremely financially disruptive events that could be behind the next systemic financial crisis”.

Not to be outdone, Larry Fink, the founder of the world’s biggest asset manager, Blackrock, claimed climate change would soon usher in a “fundamental reshaping of finance” and reallocation of capital.

But optimistically, the size of the prize from the transition could be immense.

The Morgan Stanley report sees $US3-$US10 trillion of earnings before interest and tax, or EBIT, “up for grabs” for companies and investors who put their cash towards the decarbonisation game. It shines a light on five key solutions where the investments should be made and the best pay offs are possible: renewables, electric vehicles, hydrogen, biofuels and carbon capture and storage.

Thankfully for us, Australia is already quietly progressing on several solutions despite some corporate stumbles over the years and the political debate surrounding climate change that has reduced certainty for investors. 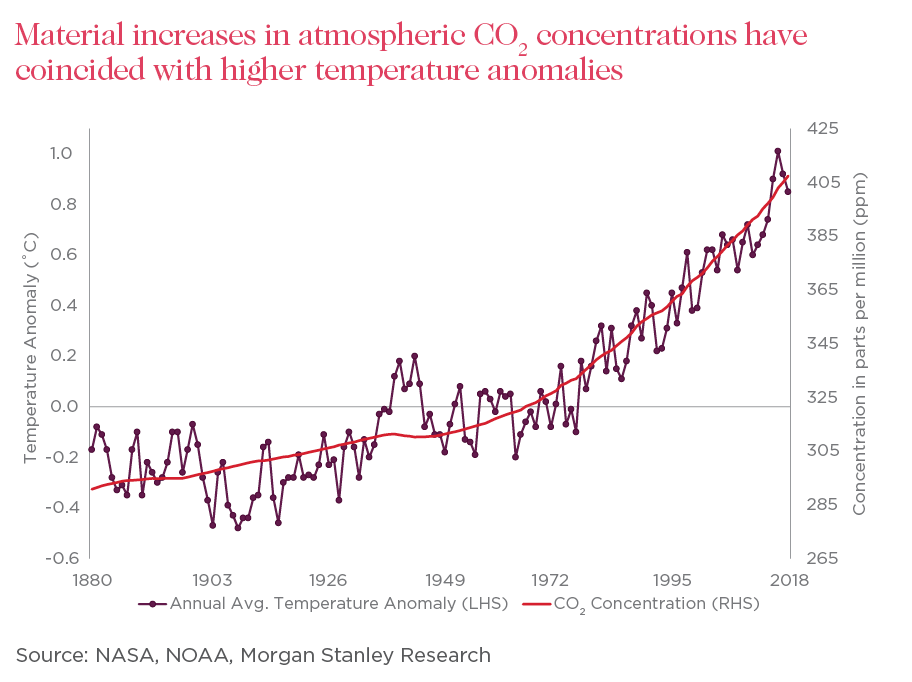 Several big-name companies and investors are increasingly wading in. For instance, Atlassian co-founders Mike Cannon-Brookes and Mike Farquhar are backing Sydney start-up Brighte, which offers zero-interest loans for homeowners to install devices such as batteries and solar panels, while Macquarie Group this month called out several areas of the globe’s “energy transition” as a market opportunity.

Westpac, the nation’s biggest financier of greenfield renewables projects, in November revealed in it was just shy of its target to lend $10bn for climate change solutions by 2020 and on track for $25bn by 2030.

“Climate change creates risks and opportunities,” the bank’s 2019 sustainability report says. “As a financial institution, the most constructive role we can play is to work with customers to achieve a net zero emissions economy.”

Grant Jepson, Westpac’s director of energy infrastructure and resources in its institutional division, says the challenge for new technologies lies in the speed at which they can scale to meet the challenge. In his letter, Fink touched on similar points, noting how the technologies to cost-effectively replace many of today’s essential uses of hydrocarbons remain elusive, despite the advances. But he left little doubt as to where Blackrock is positioning, saying “sustainability and climate-integrated portfolios can provide better risk-adjusted returns to investors” and was the “strongest foundation” for portfolios in the future.

“We have a strong understanding of what the energy transition means,” Jepson says. “(But) achieving scalability across new technologies is the biggest challenge. You can do it in a lab but can you do it on a commercial scale?”

In terms of renewables, the Clean Energy Council (CEC) states they made up 21 per cent of our power in 2018, a sharp jump from 17 per cent in 2017. But more efficient stored energy needs to be part of the solution to align the peaks and troughs in supply and demand and reduce the strain on electricity grids. And despite the advances in battery technology, they’re unlikely to be the complete answer for applications such as heavy industry and transport. 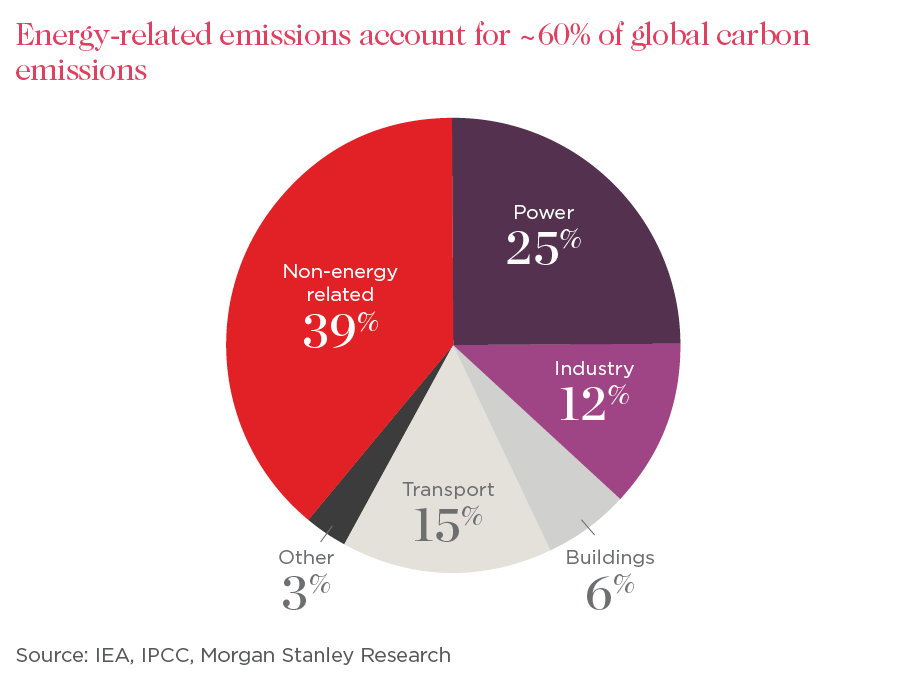 The complexities of the transition appear to be showing – the CEC last month stated that new investment commitments in large-scale renewable energy projects collapsed more than 50 per cent last year, from 51 projects worth $10.7bn in 2018 to 28 projects worth $4.5bn in 2019. Why? According to the CEC, “mounting regulatory risks, under investment in transmission and policy uncertainty” is to blame.

More recently, thanks in part to a recent report by Australia’s chief scientist Alan Finkel, focus has intensified on hydrogen as the next big potential technological breakthrough and alternative storage medium.

“Hydrogen allows you to you take excess renewable energy, transport it and take it where it is needed,” says Geoff Ward, the CEO of Perth-based Hazer which is commercialising a technique that produces hydrogen (as well as useful graphite) without any carbon emissions.

Ward says the most common process involves heating natural gas (methane and ethane) to 1100 degrees in the presence of steam. But for every tonnes of hydrogen produced, 10-12 tonnes of CO2 are emitted. The Hazer process uses an iron ore catalyst to decompose methane into hydrogen molecules and solid graphitic carbon.

“We estimate we will get a 100-150 tonne abatement credit for every tonne of hydrogen produced,” Ward says. “We think that will be a really valuable selling point for the early adopter market.”

Another storage solution – pumped hydro – is also gaining traction with the planned $5bn expansion of the government-owned Snowy Mountains project which would add 2000 megawatts to the network, or enough to power 500,000 homes.

Pumped hydro entails storing water in a higher pit or dam and then releasing it via a generator in times of peak demand. At off-peak times, the water is pumped back up to the high ground ready for re-release.

In northern Queensland, Genex Power is taking the novel approach of converting an old gold mine called Kidston into such a project, highlighting a change of thinking about Australia – from the traditional powerhouse of natural resources buried in the ground to those of wind and sun.

“We think of it as a giant water battery,” says Kidston chief Simon Kidston, whose grandfather founded the eponymous mine.

In terms of carbon capture and storage, Morgan Stanley cites the “uncomfortable truth” that it has to be part of the solution as coal-fired power generation capacity looks set to increase over the next decade globally, while biofuels can “fill a gap where other technologies cannot replace diesel and gasoline-based mobility”, initially in passenger cars.

Experts say that the cash to develop these new technologies will likely come from investment rather than spending, a subtle but important difference reflecting the fact that private investors – superannuation funds, banks and even mums and dads -- are leading climate action for the planet and at the same time seeking opportunities for themselves, their unit holders and shareholders.

Banks, for example, have launched products such as sustainability loans and green bonds (with more than $US160bn issued globally this year alone). 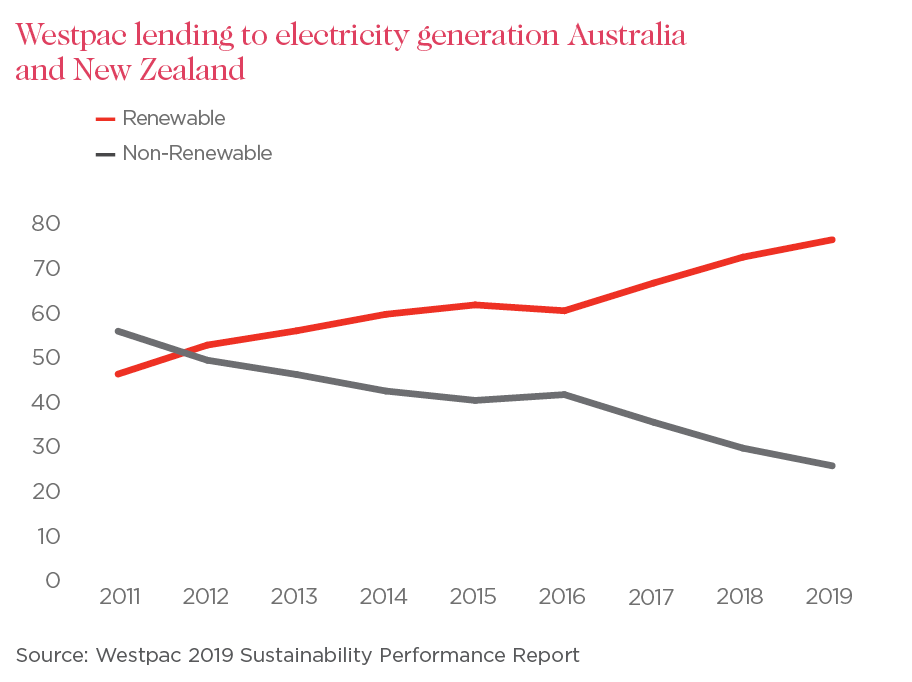 In July, Westpac extended a $100 million sustainable loan – facilities typically linked to achieving certain renewable goals such as energy and water saving – to the owner of the Gold Coast Airport, Queensland Airports to fund projects including switching the airport’s lighting to light-emitting diode (LED) units and installing energy-efficient motors on the baggage handling system. The bank also launched the world’s first Green Tailored Deposit certified by the Climate Bonds Initiative, a product that links the cash deposited to renewable energy, and low-carbon transport and building projects.

But while a plethora of bankable solutions are emerging, governments need to deal with the broader reality that winners and losers will emerge in the low-carbon transition.

According to Morgan Stanley, 1.5 billion workers globally are directly employed in sectors “critical to climate stability”, with many jobs to disappear and others requiring retraining. It adds that its “base case assumptions” for the five technologies key to meeting the Paris Agreement suggest the world will fall short, with meaningful change in the next decade critical to reaching net zero emissions in 2050 and beyond.

But on a brighter note, the bank adds that the odds of “more ambitious climate policy has improved significantly” and a fully renewable energy sector is likely to create 52 million jobs by 2050, with the loss of 27 million.

As the analysts conclude: “Transitioning to a low carbon economy must be done in a sensitive way to minimise the potentially negative implications for society… while achieving a ‘just transition’ is a global challenge, the impacts on workers and communities are inherently local.”