For markets, it was almost the final supper of 2018.

Initially, this grand feast appeared successful. Stock prices rallied after Trump stepped back from more than doubling tariffs on $200 billion in Chinese products and both nations signed off on 90 days of negotiations on contentious issues, such as intellectual property protection, non-tariff barriers and cyber theft.

But optimism the world’s two biggest economies will reach agreements acceptable to both sides soon unravelled.

And it remains one of the key nine risks to watch in 2019, a year investors will enter with some bruises. Since January, the local S&P/ASX 200 stockmarket index has fallen around 7 per cent, more than the global MSCI index’s 4.5 per cent slide, as the Aussie dollar slipped from around US78c to US72.5c. Bonds haven’t been spared, US 10-year Treasury yields rising from 2.4 per cent in January to around 2.9 per cent as investors sought other assets, bringing the multi-decade bond bull market to a close.

A big factor in all of this is the fact this year was when the polite “trade tensions” euphemism was replaced with “trade wars”. Ultimately, further US tariffs are likely with China unlikely to cave in late February/early March when the 90-day deadline ends as China's leaders gather for the annual national legislature. But exactly how this new era of protectionism and isolationism progresses will be critical for geopolitics and markets.

As Trump and Xi dined in Buenos Aires, relatively new Federal Reserve chairman Jerome Powell emphasised another key risk when he characterised the current stance of monetary policy as “just below” neutral, rather than a “long way” from it, as previously described. Markets took that to mean fewer rate hikes in the US next year, having clear implications for currencies, global bond yields and – more broadly -- the price of money.

Unlike Australia, official interest rates have been rising in the US due to the strong economy, tax cuts and fiscal stimulus. But with growth having undoubtedly slowed from the breakneck pace of mid-2018 and chairman Powell’s recent comments, the question of when the Fed tightening ceases is front and centre.

In addition to another hike this month, we see three hikes in 2019 with the federal funds rate peaking at 3.125 per cent. But risks are clearly high, as the market will view every Fed hike as the last.

For market watchers, this year will also go down as the beginning of the shift from the quirks of “QE to QT”, or “quantitative easing” to its opposite number, “quantitative tightening”. 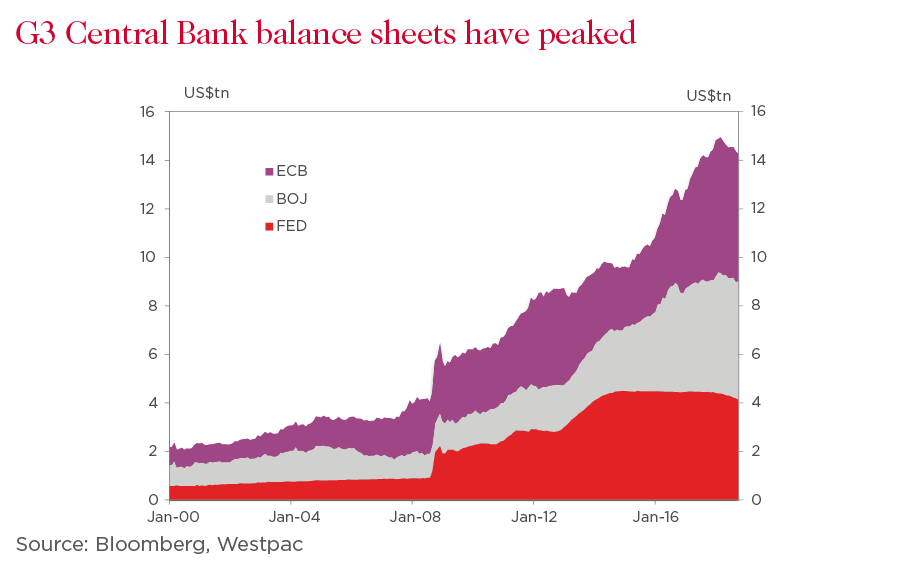 Since the global financial crisis, QE has been a key driver of markets as central banks injected trillions of dollars to suppress funding costs and spur economic activity. That’s now turning, as central banks, led by the Fed, stop buying bonds and let balance sheets shrink. A fair bet is higher levels of volatility as markets adjust.

Never far from the national psyche, the housing market arguably tops the key domestic risks next year. How much further will prices fall, and how will household spending and residential construction respond? An inter-related risk is banks’ wholesale funding costs, which followed global interest rates higher this year, adding to the industry’s more challenging operating environment.

Unfortunately, history doesn’t shed much light with few examples of material house price corrections in the absence of high interest rates and/or a wider macro-economic shock. The healthy backdrop of low unemployment and low interest rates provides comfort to some. But uncertainty around credit tightening, wages growth, Labor’s proposed changes to negative gearing and capital gains tax, and the possible economic slowdown ahead of the May federal election make the housing market a key risk, and likely ongoing talking point.

Australia isn’t alone in facing some of these risks, particularly weak wages growth. Indeed, many economies have enjoyed low levels of unemployment through 2018 but wages are not responding, the US labour market only showing some nascent upward pressure as the jobless rate falls to 40-plus year lows. 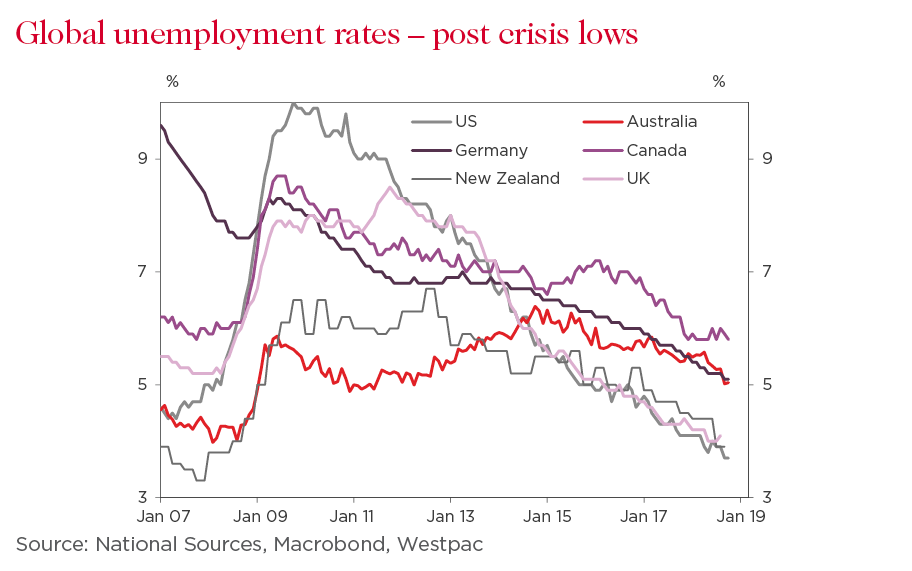 The key question for markets is whether globalisation and digitisation has permanently changed the relationships that historically drove wages, or is it just going to take a little more time. For now, it seems clear unemployment rates may need to decline further than usual before spurring a material rise in wages, suggesting Australia’s needs to keep falling below 5 per cent, already a six-year low.

The final key market risks relate to commodity prices, which are highly important to Australia.

Since spiking to around $US85 a barrel in October, the oil price has been under pressure and talk of surpassing $US100 all but disappeared. Just as supply fears drove the price spike, these concerns have been present on the way down as the US locks in its position as the world’s largest producer, changing the global supply balance.

However, demand fears have also surfaced and credit markets are responding by widening materially in November, suggesting debt investors are showing greater concern about the ructions in the oil market.

Credit markets have historically been a harbinger of growth cycles and the breadth of recent widening either suggests a material revision to the global growth outlook, or an overreaction and opportunity, depending on who you ask. Time will tell if this is the canary in the coalmine.

Clearly, risks are many, varied and high. I didn’t even mention Brexit or Europe…

As is often the case, given the broad flow on impacts to global asset prices, getting the Fed call “right” is probably the most challenging aspect for the year ahead. Back home, it’s simpler: the Reserve Bank cash rate is certainly on hold. But in a world of trade wars and breakdowns in economic relationships, words like “simple” and “certain” are unlikely to be commonly used by market watchers in 2019.