Momentum very much a plus in a murky world

Just days out from Christmas, UK chancellor Rishi Sunak this week again extended the nation’s wage subsidy scheme as Britons bunker down for a particularly long, cold winter of restrictions as COVID-19 cases top more than 35,000 a day.

Across the English channel, Germany revealed plans to sell up to €471 billion of debt this year – a record – to help pay for a pandemic that is confining Germans to Christmas lunches with no than five people aged over 14 around the table.

Meanwhile in Canberra, John Frydenberg was having a relatively better week.

Fronting the media on Thursday for the Mid-Year Economic and Fiscal Outlook, the Treasurer revealed a rosier set of numbers than outlined in the federal budget just 10 weeks ago. Net debt, GDP, unemployment – all were expected to print better in coming years. Likewise, the 2020-21 budget deficit was revised from $214 billion to $198bn. Sure, still the largest since World War II, but an improvement, nonetheless. 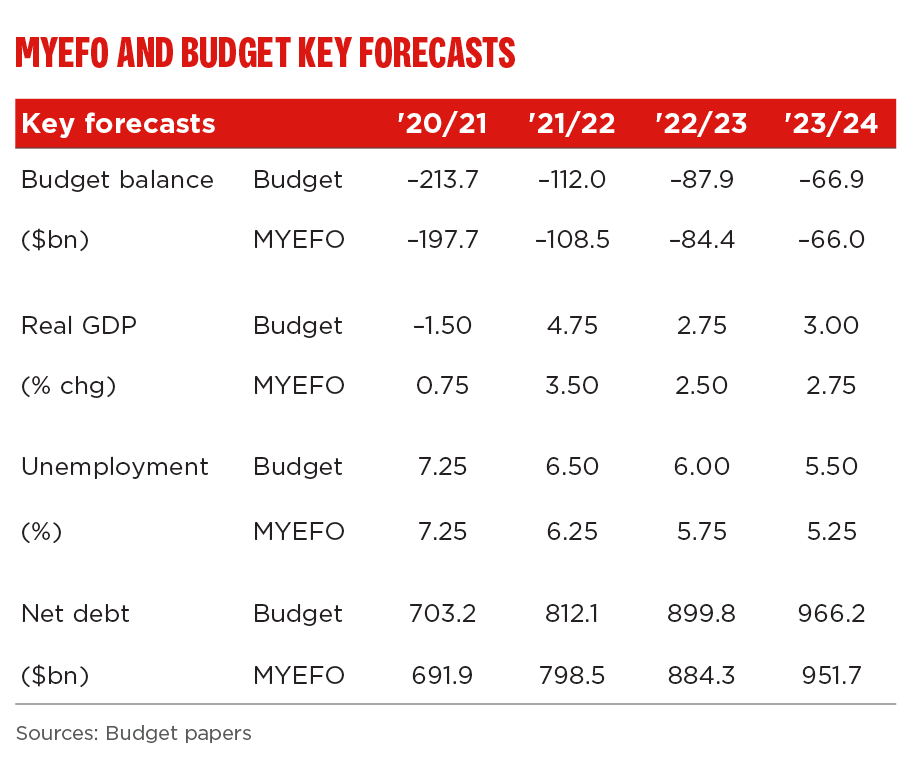 Aside from the booming iron ore price, Australia’s performance controlling COVID-19 this year and subsequent better than expected economic performance has reduced the cost of the JobKeeper wages subsidy scheme by $11.2bn.

That’s right – unlike other countries facing renewed lockdowns and all the costs that comes with them, the federal government is pocketing savings on emergency COVID support measures.

Adding to the economic cheer, the Australian Bureau of Statistics also chimed in that the unemployment rate had dropped to 6.8 per cent in November – total employment now just 1.1 per cent below pre-COVID levels – and household wealth is at a record high. The property market rising, rather than crashing as feared in March, was credited for contributing to the gains in wealth.

“Australia’s economy is rebounding strongly,” the Treasurer said on Thursday’s MYEFO briefing, adding the nation was “outperforming all advanced economies”.

“The improved economic outlook has led to an expected increase in company tax receipts and GST collections, and around 640,000 fewer people on JobKeeper so far in the December quarter than expected at budget.

“We have come a long way. A long way from Treasury’s initial estimate that the unemployment rate could hit 10 per cent by year-end or 15 per cent without JobKeeper.”

Understandably, given 2020 will be remembered for recording the biggest economic shock since the Great Depression, the Treasurer cautioned the road ahead remained “very challenging” and “we have not yet defeated the virus”.

Suddenly, Christmas for Australians may not be quite as COVID-free as it looked just a week ago.

But assuming NSW’s “gold standard” contact tracing operation gets the Sydney outbreak under control, Australia looks set to enter 2021 in an economic position likely the envy of the world. In pure GDP terms, arguably only China is roaring back faster after being the first nation to do battle with the virus.

Of course, never before seen fiscal support is a big factor behind Australia’s V-shaped looking recovery. The federal government put its direct economic support at $251bn, with more than $138bn already in the hands of households and businesses. Then there’s state government measures, the Reserve Bank’s massive monetary support (few people would have bet on the cash rate diving to 0.1 per cent at the start of the year), loan repayment deferrals from the banks and the superannuation early release scheme.

Remarkably, analysis this month by online publisher Visual Capitalist claimed Australia was one of the few countries this year where household debt actually decreased, by almost 5 per cent relative to GDP, pointing the finger at the more than $35bn consumers have withdrawn from their super funds as a key driver.

Despite ongoing debate around the health-economy “trade off”, Australia’s success in suppressing the virus has undeniably contributed to the recent run of strong economic data and momentum, economists say.

A somewhat eye-popping new statistic to emerge this week related to Western Australia. After effectively closing its border to other states for much of the year, WA became the first state to recover all the jobs lost and add some, with payrolls now sitting 0.7 per cent higher than pre-COVID levels.

A new bulletin from the Swiss-based Bank for International Settlements also pointed to the benefits of acting early to avoid the pain of lingering downturns, finding that recessions are “systematically associated” with higher mortality and countries that suffered a bigger decline in GDP this year “have also seen a larger number of deaths in excess of official COVID-19 fatalities”.

“Policies suppressing infections at an early stage could thus prove particularly effective in containing both mortality and economic damage, if they avoid a hard lockdown later,” the authors write.

But as the Treasurer reminds, there remains a “very tough road ahead”.

Topping his list of risks is the timing, distribution, and effectiveness of vaccines, trade tensions and lingering domestic economic uncertainty resulting in consumers failing to unleash the build-up in savings they’ve amassed this year. Economists are also watching what happens to immigration, the unwinding of government support next year and for any “scarring” among households and small businesses from the nation’s first recession in almost 30 years.

Bill Evans, Westpac’s chief economist, labels MYEFO a “marking time” economic statement given the limited new policy, putting the focus on the budget in May. He expects the government will need to replace JobKeeper with an assistance program for employees and businesses still affected by COVID restrictions, such as the closed foreign border, and also permanently increase the supplement payment for the unemployed.

“This will be the likely final budget before the 2022 Federal election so the government will be focussed on addressing the need to support an economy where it is likely to continue to be forecasting an unemployment rate that will be around 6 per cent (1.5 per cent above the full employment rate) at election time,” he said.

After a year of endless twists and turns, "forecasting" could be the key word there. May – let alone 2022 – seems a long way away. But it’s hard to deny things could look a fair bit worse.