While COVID outbreaks continue to wreak havoc abroad, the virus again looks to be under control locally. Restrictions are easing and borders opening up.

All of this bodes well for the Australian economy and solid gains are likely to be reported for the back end of this year, along with a lower than originally forecast unemployment rate. But of course, we aren’t out of the woods yet given the scale of the recession this year and the recovery will be gradual, with our forecasts having activity only just reaching its pre-COVID level by Christmas next year.

For the housing market, however, the recovery is looking even rosier than almost everyone feared, as laid out in our November Housing Pule report.

Turnover in the market ex Victoria is now slightly above pre-COVID and year-ago levels, prices are rising in most markets and housing–related sentiment has rallied strongly, the “time to buy a dwelling” index in our monthly consumer sentiment survey above its long run average.

Meanwhile, the game-changing earlier than expected vaccine suggests international border restrictions could be relaxed late next year, possibly even from the September quarter, suggesting the rebound in migration and population growth could come through much earlier than assumed.

Bringing this all together, the prospects for dwelling prices have clearly improved.

Back in September, we revised our call for a 10 per cent correction, acknowledging the milder than expected initial decline, the more material support coming from low interest rates and a somewhat milder recession.

In short, we pencilled in further declines that would take the total peak to trough fall to 5 per cent by mid next year, followed by a 15 per cent gain the two years to June 2023.

However, that further decline through to June now looks unlikely given the market momentum and sentiment, a milder “soft patch” in the economy for housing next year and the earlier timing on vaccines. 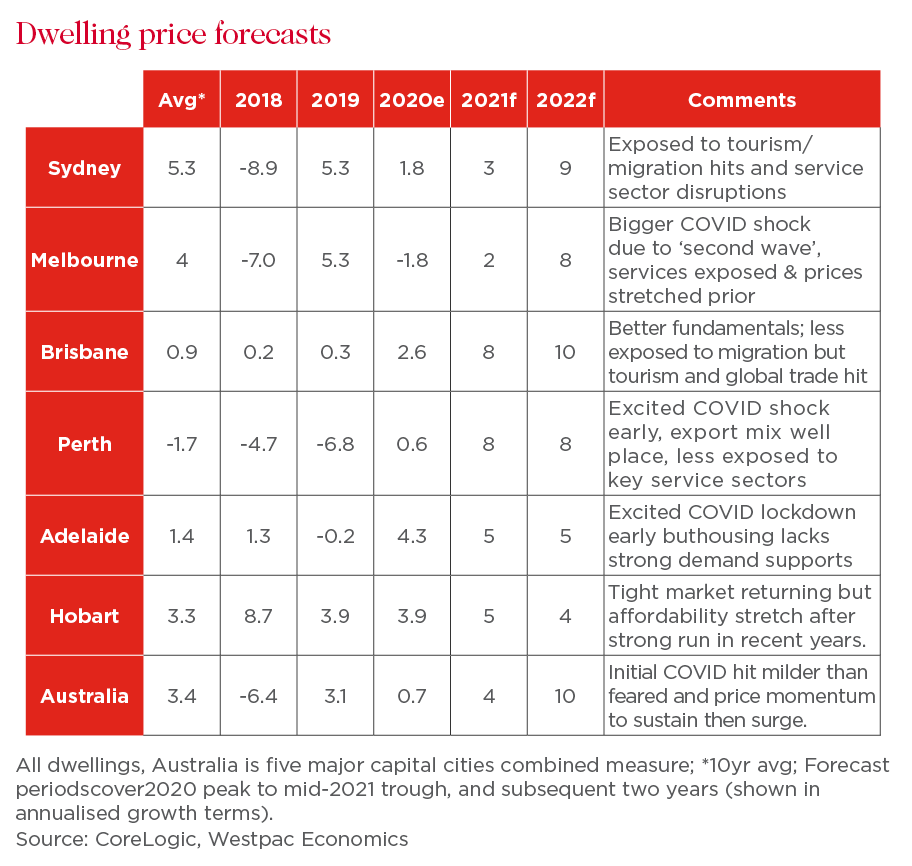 There will still be areas of weakness, parts of the Sydney and Melbourne high rise market – which could see further declines in the order of 10 per cent – comes to mind.

But the strong overall momentum will be welcome news to the central bank and governments. A warning note: ongoing strong gains will, however, start to test the nerve of regulators and the RBA in late 2022, bringing policy responses – ie “macro-prudential” measures that limit riskier types of lending (remember the investor and interest only caps?) – back into frame.

For more on what to expect in each state’s housing market, read our report.