House prices are set to bottom out by June after a 2.3 per cent fall before bouncing 15 per cent, according to Westpac’s economics team, who believe low mortgage rates and a less severe recession than feared will stabilise the market before a solid recovery.

After previously expecting a 10 per cent slump in national prices between April this year and June 2021, chief economist Bill Evans yesterday lowered the expected fall to 5 per cent as several capital cities proved more resilient, particularly Perth and Adelaide but also the biggest market of Sydney, where prices are likely to only adjust 5 per cent, half the amount previously forecast.

Melbourne, however, is still expected to decline 12 per cent by June – or a further 8 per cent – as lingering disruptions from the second lockdown and the city’s heavy exposure to tourism, foreign students and migration inflows weigh on the recovery.

The new forecasts mean national prices are only expected to fall a further 2.3 per cent by June, having already declined 2.7 per cent since the peak in April. From June 2021, Mr Evans and senior economist Matthew Hassan predict a 15 per cent national price “surge” until mid-2023, or 7.5 per cent per year, led by massive gains of 20 per cent in Brisbane and 18 per cent in Perth.

“This recovery will be supported by sustained low rates, which are likely to be even lower than current levels; ongoing support from regulators; substantially improved affordability; sustained fiscal support from both federal and state governments; and a strengthening economic recovery (particularly once a vaccine becomes available, which we expect in 2021),” Mr Evans said. 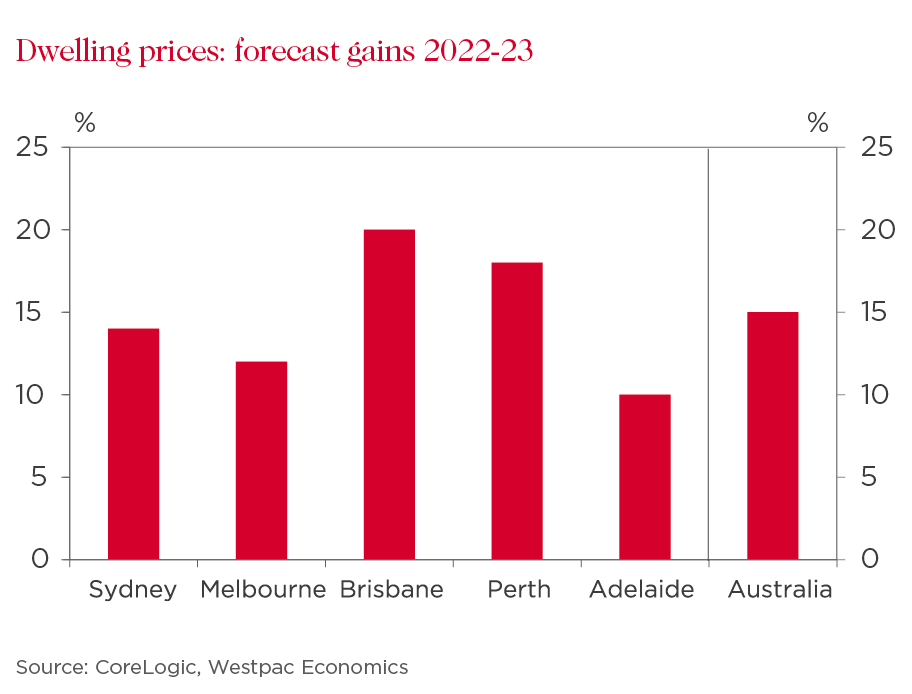 However, it’s unlikely to be a straightforward ride – the economists see a four-stage housing cycle playing out.

In the first phase, which has “now largely passed”, prices declined in response to the COVID shock to the economy. The upcoming December and March quarters mark phase two, a period in which Mr Evans tips relatively stable prices, possibly even some “modest increases”.

He said while the Reserve Bank was unlikely to cut the official cash rate further, fixed rates – which have recently proven popular – “may well go lower” to improve affordability. Also supporting the near term outlook, Westpac recently upgraded its GDP growth forecasts for the second half of 2020 to 4 per cent from 2.8 per cent and lowered its year-end unemployment forecast to 7.8 per cent.

Phase three occurs through 2021 and features “some limited resumption of downward pressure on prices” amid an “increase in ‘urgent’ or distressed sales” as borrowers struggle or are unable to resume mortgage repayments.

But he said prices would then lift again in the fourth phase “once this selling pressure has worked through the system”.

The forecast change comes amid improving optimism among economists about the housing market following better than expected performance and data, housing finance approvals last week jumping by a far stronger than expected 8.9 per cent in July.

Mr Evans said he had been surprised at the strength of the recovery in new lending, and the 15 per cent price rise call may also prove too cautious.

“Readers might see that estimate as optimistic but there are some risks to the upside,” he said.

“Including the 5 per cent fall we expect out to mid–2021, this would see a cumulative increase in prices of 10 per cent from pre-COVID highs over a three year period where interest rates and credit supply are likely to be at maximum levels of stimulus.

“Those upside risks are based on the psychology of markets. If participants are convinced about our views on the likely favourable conditions in the fourth stage of the cycle they may choose to boost demand earlier than we currently expect providing an even more robust defence against the headwinds we envisage in stages two and three.”