It was February 2018 and Australia’s property market was slowing.

After a multi-year boom, Sydney – often dubbed one of the priciest cities in the world – had turned, intensifying the pressure coming from weakness in Melbourne and multi-year pain across parts of Western Australia, The Northern Territory and Queensland.

The causes varied, depending on who you asked – tapped out indebted consumers, less demand from foreign buyers and the natural end of years of prices galloping ahead of lacklustre wages growth. Yet another factor had caught the eye of some of the world’s largest private equity and alternative asset managers: a shifting regulatory environment for lending.

“Bluestone Holdings Australia is well positioned to capitalise on the currently attractive market and regulatory dynamics,” Lee Millstein, an executive at New York-based Cerberus Capital Management, said in a February 2018 statement announcing the acquisition of the non-bank.

In the months prior, fellow US giants KKR and Blackstone snared majority stakes in Pepper Group and La Trobe Financial, respectively, giving the non-bank sector a fresh face at a time when banks were tightening loan serviceability assessments, complying with regulatory lending caps and confronting a Royal Commission.

“I think they (private equity) are recognising these businesses do have significant value, particularly in the environment at the moment,” Tim Dring, EY Oceania banking and capital markets leader, tells Westpac Wire. “The returns there are pretty strong, we’ve seen these businesses grow pretty quickly and now are requiring additional capital to look at the next phase of their journey.”

A year on from the Cerberus deal, non-banks – which don’t take deposits and are thus not regulated by the prudential regulator – continue to grow rapidly, mostly through brokers and online. The Reserve Bank puts the sector’s recent mortgage growth at around 15 per cent a year, “well above” banks and lifting market share to a little under 5 per cent of outstanding housing credit, down from around 10 per cent in 2007 but off post-GFC lows when their funding dried up.

For perspective, “non-Authorised Deposit-taking Institutions'” (ADIs) 15.9 per cent home loan growth in the past 12 months compared to 4.2 per cent for the overall system and 3.5 per cent for all ADIs, according to Macquarie banking analyst Victor German. European and Asian lenders have also experienced double-digit home loan growth.

“Competition is intense,” Dring says, claiming it was greatest from non-banks and pointing to EY’s analysis of the major banks’ recent “turbulent” results that suggested borrowers were attracted to “faster approval times and the perception that obtaining finance with the majors is now more difficult”. The RBA has also highlighted this “perception”, assisting non-banks’ growth. 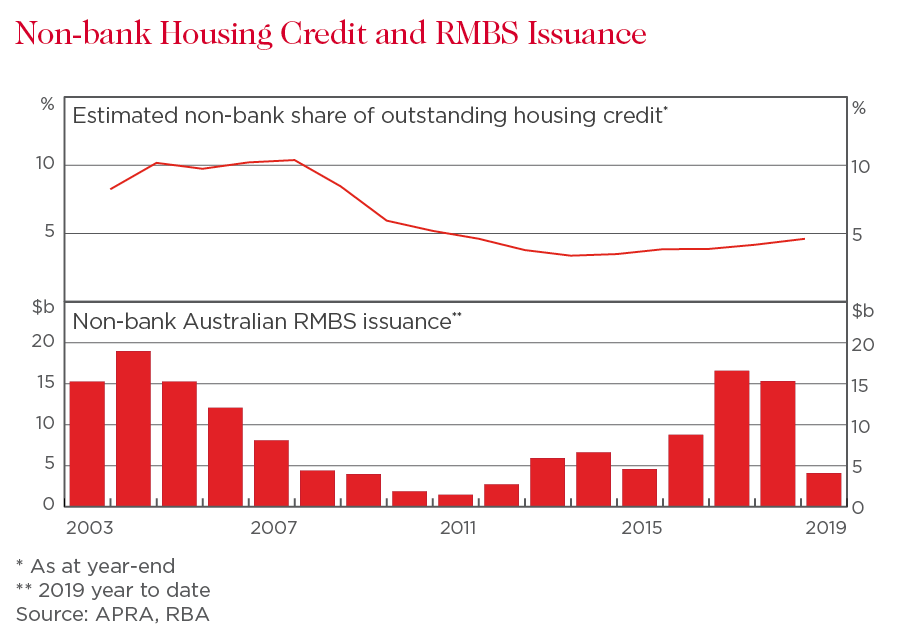 Speaking after delivering Westpac’s result this month, chief Brian Hartzer noted the “very aggressive growth” from foreign banks and non-banks, claiming the latter weren’t facing the same regulatory oversight as ADIs. Like other banks, Westpac offered a detailed run-down in its recent results presentation of the many mortgage lending standard changes in recent years, including to meet APRA requirements to assess borrowers on the higher of an interest rate of 7.25 per cent or 2.25 per cent above the offered mortgage rate.

But echoing other banks and his own recent comments that Westpac's lending appetite hadn’t changed, Mr Hartzer indicated greater serviceability assessment had slowed the process for customers and taken a toll.

“Our sense is that the regulators have focused initially on the big four banks, understandably because we're a large part of the volume,” he said at last week’s results media briefing. “But that's led, based on the feedback we get from brokers and others, to some disconnects in terms of the process that's being required by the large banks versus the process that's being required by smaller banks.

“My experience is that over time regulators don't like distortions in the market, so we would expect that that would largely get ironed out over time.”

Tension around regulation of parts of the mortgage market is nothing new for the industry. But the re-emergence of non-banks is sharpening a debate around complex and evolving issues.

While non-banks are not regulated by APRA, they must meet responsible lending laws and are overseen by The Australian Securities and Investments Commission as part of their licensing conditions. Also, the government recently broadened APRA’s powers to provide flexibility to make rules for the sector at certain times if concerned about overall financial stability, and gather more lending data from non-banks to allow better comparisons with ADIs.

In a recent LinkedIn post, former Pepper CEO Patrick Tuttle noted APRA’s greater powers and claimed that calls for additional regulation of non-banks “over and above” the National Consumer Credit Protection Act and responsible lending laws were “totally without basis”. “Of course the growth rate of mortgage lending by non-banks has increased in the aftermath of the Royal Commission. That does not mean that non-banks must immediately be regulated as if they are ADIs. Non-banks do not accept customer deposits and hence should not be subjected to bank-style depositor protections,” he wrote.

In dedicated analysis of non-banks last month as part of its bi-annual Financial Stability Review, the RBA said while their lending provides economic benefits, it can also pose risks to financial stability -- as has occurred in other countries – such as by exacerbating credit cycles or transmitting credit losses to banks due to financial links. While noting these risks were currently “limited”, the RBA said equally fast growth in lending to property developers posed greater risks. The RBA added part of the growth in non-bank mortgage lending was due to not being subjected to APRA’s lending caps on investor and interest-only lending.

“Banks increased interest rates on these products as a way of meeting the investor and interest-only lending benchmarks. Non-bank lenders, which were not required to meet APRA’s benchmarks, often do not apply this differential to investor and interest only loans,” the RBA says. “These benchmarks have both been removed for most lenders. But other prudential standards are changing, as have perceptions of risk, so, to date, banks’ interest rate differentials based on type of loan remain.” Ian Lockhart, a partner at Minter Ellison who focuses on regulation in the finance services sector, tells Westpac Wire the combination of the Royal Commission, and APRA’s serviceability and lending caps over the past few years have created a more conducive environment for non-banks.

But he said a sizeable factor more recently was likely to be the less intense scrutiny than the major banks rather than weaker or different lending laws, given that non-banks also must comply with responsible lending requirements and act “efficiently, honestly and fairly” under the NCCP Act.

“I can understand some frustration if regulatory arbitrage is a perception of the market, that somehow the banks aren’t seen as performing as well under ASIC’s obligations,” he said. “But bear in mind the principal obligations that relate to responsible lending are not imposed under the Banking Act. They’re imposed under the NCCP and apply to both banks and non-bank lenders.

“But the fact that some of the non-bank sector and even smaller banks haven’t been subject to the same level of scrutiny as the major banks, particularly bearing in mind they weren’t called to give evidence before the Royal Commission, has likely been a factor.”

Looking ahead, Mr Lockhart added that ASIC had shown in the past a willingness to act against non-banks and that APRA’s greater focus on the banking industry’s lending serviceability standards may have helped define the “standard for good industry practise across the board”. The RBA backed this view, finding “non-bank lenders have also tightened their lending standards over recent years” alongside moves by the banks since 2015. However, it remains an evolving space for participants as ASIC consults on updating its responsible lending guidance.

EY’s Mr Dring says despite non-banks’ “remarkable” growth in recent times, it’s off a low base and may struggle to hold at the same rate as the regulatory environment shifts further over time. He adds their funding models appeared to still rely heavily on securitisation – where assets such as mortgages are packaged up and sold to investors.

While the residential mortgage backed securities market has bounced back strongly in recent years from the post-GFC lows, the RBA says the cost of funds has risen “significantly” since early 2018 and is “well above” the cost of bank funding. Analysts such as UBS’s Jonathan Mott have also expressed caution about lenders that are growing rapidly given the cooling property market and softer economic growth. In October, non-bank Liberty Financial gave an insight into its performance, reporting a slight uptick in impairment charges for full-year 2018, 15 per cent growth in new loan originations and a return on equity of 15 per cent.

“The main constraints to a more rapid expansion of non-bank mortgage lending stem from their funding,” the RBA says, noting the other sources of funding aside from securitisation have been high net worth individuals and institutional investors.

“This means that non-bank lenders will struggle to compete with banks for the highest quality owner-occupier principal and interest mortgages, unless they are able to secure alternative long-term funding. In addition, it does not currently appear feasible to significantly increase the capacity of RMBS markets…because the investor base for such instruments is relatively narrow and securing new investors has been a prolonged and challenging task.”

Only time will tell if private equity’s interest in the space represents a long-term change in this task.

“It does bring a whole new discipline to the table, whether it be expertise around management, access to talent, driving sort of bottom line efficiency, further investment in technology,” Dring says of the recent entrance of some of the world’s biggest private equity players into the non-bank sector.

“I think the challenge will be as those (regulatory) restrictions get lifted and wound back over time, do we see that growth rate starting to taper off through the non-bank channel and some of those mortgages…start to find their way back to the major banks again.”

The views expressed are those of the author and do not necessarily reflect those of the Westpac Group (‘Westpac’). This article may contain material provided directly by third parties. Westpac accepts no responsibility for the accuracy or completeness of, or endorses any such material. Except where contrary to law, Westpac intends to exclude liability for this material.