If you picked up a newspaper over the summer break, you’d have been hard pressed to avoid a doom and gloom story about the housing market.

According to several commentators, the Australian housing market is in all kinds of trouble: regulators (and potentially, the Royal Commission) have over-reacted, banks are ‘afraid to lend’, too much new supply is coming on line, and prices are tumbling with no end in sight.

For Australians whose primary asset is often their home, it all sounds a bit scary.

I think it’s time everyone takes a deep breath and looks at the facts. While there are certainly powerful dynamics at play, and ongoing challenges in certain local markets, my view is the housing market remains fundamentally sound and, overall, the adjustments are nothing to be alarmed about.

It’s important to remember there is no single housing market. Conditions vary significantly across suburbs while the dynamics in Sydney and Melbourne have been quite different to Perth, Adelaide, Brisbane or Hobart.

Between 2011 and 2017, house prices in Sydney rose by around 75 per cent, while Melbourne prices were up 55 per cent (in contrast Perth prices fell 2 per cent). Some analysts saw this as evidence of a speculative, debt-fuelled bubble, with buyers expecting to ‘flip’ properties for ever-higher prices.

We think the drivers have been more fundamental.

Household debt grew along with higher prices, although low interest rates meant the percentage of income needed to cover existing commitments remained low — hardly the sign of a speculative bubble.

And, it’s worth remembering housing is a long-term investment: those who bought several years ago are — generally — still ahead on their investment.

So, what to make of recent price falls? 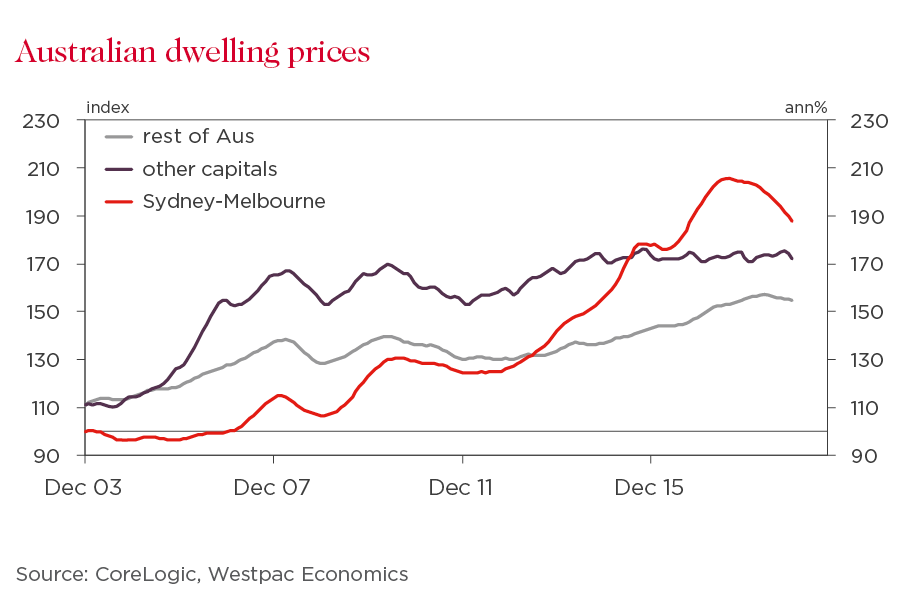 Some of the reduction reflects an increase in supply as large apartments completed, but this is likely to be temporary as the pipeline of new development eases.

A significant driver has been a reduction in demand from investors, in part reflecting a deliberate strategy by regulators to cool growth. In 2015, APRA introduced caps for banks on investment property lending growth, and in 2017 directed a reduction in the percentage of interest-only lending.

To meet these caps, banks increased the price of these loans, reducing the attractiveness of property relative to other investments.

These changes were done to ensure households would be well positioned to withstand higher interest rates whenever the rate cycle turned. The changes worked — as APRA noted this week — and some heat came out of the market. Sensibly, these caps have now been removed. I think history will show that these actions were well thought through, well implemented, and highly effective.

More recently, uncertainty around potential taxation changes have given investors further reason to pause. Investors — like business owners — prefer certainty. A slowdown in demand is also not surprising in the run up to a federal election.

As to the perception that the Royal Commission has made banks scared to lend, for Westpac this is simply not the case. Let’s be clear: we want to lend. And we have enough capital and funding to ensure we continue to meet the borrowing needs of consumers, small businesses, and commercial enterprises — even in a downturn.

What has happened is that, working with regulators, banks have put additional buffers into loan serviceability calculations, which reduced the average amount customers could borrow. Also, there’s been more rigorous scrutiny of customers’ expenses, lifting the number of expense categories we assess to 13.

With interest rates historically low, it’s in everyone’s interest to make sure customers can afford loans if circumstances change. That said, there’s no question increased scrutiny of expenses has been a significant change and, in the short run, added both time and cost to getting a loan. Over time technology should reduce this.

One unintended consequence of these changes has been to penalise small businesses, where more complex cash flow and expenses have made it harder to meet the increased data requirements, given many loans are secured by residential property. We have raised this issue with regulators and government and are working to find a solution.

Notwithstanding these challenges, credit is far from being choked off and the market remains intensely competitive.

Housing credit growth has eased from around 7.5 per cent in 2015 to around 4.9 per cent in 2018. Greater scrutiny of APRA-regulated lenders, particularly the majors, has resulted in smaller banks and non-banks growing faster, a trend that could warrant attention if an increased proportion of loans were being written at less stringent lending standards. 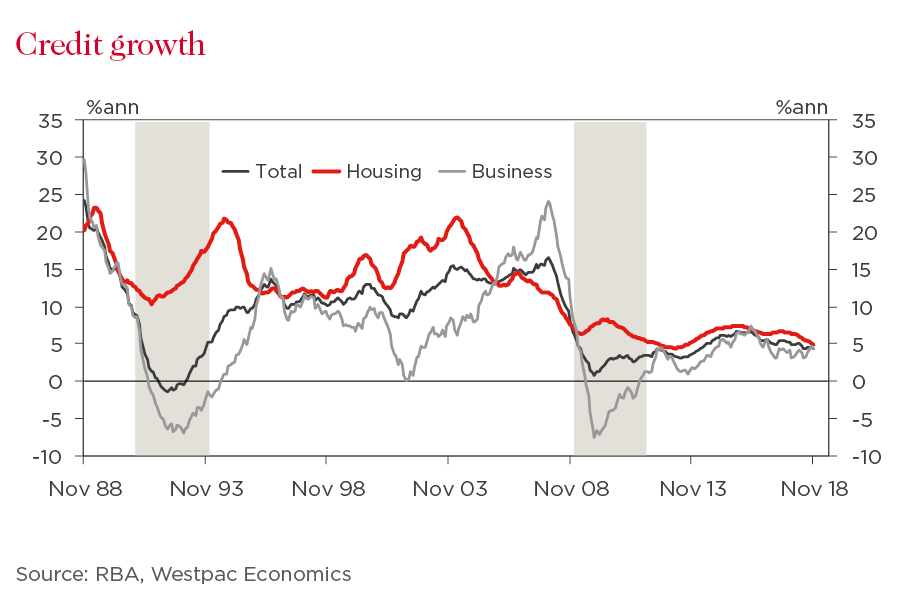 For Westpac, the recent decline in credit growth was due entirely to a reduction in new applications: approval rates have been steady and our risk appetite hasn’t changed — there are just fewer people walking through the door.

Looking ahead, affordability needs to improve to attract more buyers to the market, after rising prices in prior years made it increasingly difficult for new entrants to save a deposit and service a loan. As such, prices could fall further in certain markets.

But it’s important to note it is normal — and indeed healthy for the economy – for the house price cycle to slow after the six strong years of growth to 2017. After all, lower prices mean more affordable housing for people who would otherwise be priced out of the market.

And despite several uncertainties ahead, the economy remains solid with GDP growth of 2-3 per cent, reasonable population growth, and strong bank balance sheets.

Now more than ever Westpac stands ready to support customers. What we’re seeing is an orderly adjustment – not the bursting of a bubble — that to date regulators and banks are managing reasonably well.

We are, and will remain, open for business.