It’s hard to fathom – and unwelcome news for savers – but official interest rates may be effectively cut to zero next year.

The move was sparked by Dr Lowe’s comments on Tuesday night that “quantitative easing” (QE) – a form of stimulus whereby a central bank buys assets such as government bonds – “becomes an option to be considered at a cash rate of 0.25 per cent, but not before that”. Dr Lowe also noted that 0.25 per cent marked the cash rate’s “Effective Lower Bound” because interest paid on reserves held by institutions, like banks, at the RBA was 25 basis points below the prevailing cash rate and therefore rates “would already be at zero”.

“That is a clear signal to us that the RBA will be prepared to cut the cash rate down to 0.25 per cent, rather than the lower bound we had expected of 0.5 per cent,” said Mr Evans, a renowned cash rate forecaster. “Accordingly, we have adjusted our cash rate forecast to include a second cut in June 2020 following the cut we expect in February. We have also delayed the timing of the expected introduction of Quantitative Easing.”

Beginning in June, the Reserve Bank has cut the cash rate three times this year to a record low 0.75 per cent to lower the jobless rate towards 4.5 per cent – or “full employment” – lift inflation and keep a lid on the Australian dollar.

The cuts have, however, spurred debate about the efficacy of monetary policy when rates are so low following muted impact across the economy to date, other than reigniting house price gains. The RBA this month recognised the “negative effects of lower interest rates on savers and confidence” and the possibility a “further reduction in interest rates could have a different effect on confidence than in the past, when interest rates were at higher levels”. In the wake of the RBA’s most recent cut in October, the Westpac MI Consumer Sentiment Index slumped 5.5 per cent.

Mr Evans said that with the Governor reluctant to adopt QE, the jobless rate set to rise to 5.6 per cent and the RBA likely to want to save its final rate cut until after the May federal budget, June made sense for a rate reduction. QE would then follow, meaning Australia would join the list of countries to explore “unconventional” monetary policies since the global financial crisis, including the US, UK and Europe. 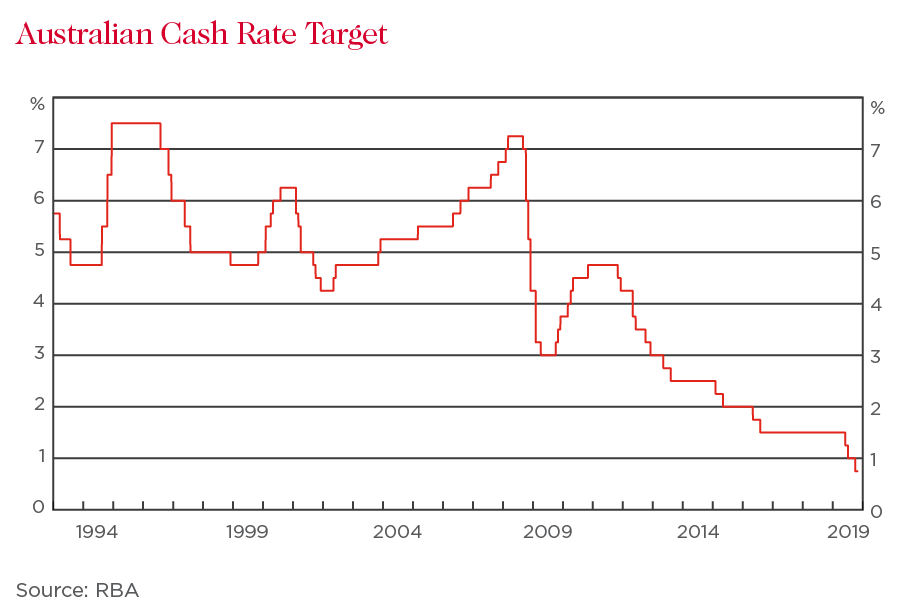 “If we look forward to the second half of 2020, with no interest rate flexibility available, and the RBA still holding, at best, its … current inflation and unemployment forecasts … it seems a reasonable prospect that the QE option will become quite attractive,” Mr Evans said. “We also expect that a small ($2-3 billion) open ended monthly commitment to purchases would have a meaningful impact for the RBA.”

The forecast comes ahead of the federal government’s Mid-Year Economic and Fiscal Outlook next month and amid calls – including from Mr Evans – for more fiscal stimulus to fire up the economy amid the softest GDP growth since the GFC. Reiterating his call for already legislated personal income tax cuts to be brought forward, Mr Evans said that any package of budget measures in the May budget would complement an RBA rate cut in June, rather than be “sufficiently expansionary” to preclude more easing.

It came as Standard & Poor’s yesterday urged the government to hold course and deliver the first budget surplus in a decade in May, noting it fed into the ratings agency’s upgrade last year of the outlook on Australia’s AAA rating to stable.

"As the official cash rate in Australia moves toward zero there have been growing calls for the government to increase fiscal stimulus, including infrastructure spending, to stimulate and support the slowing economy,” said S&P Global Ratings credit analyst Anthony Walker. “If this fiscal stimulus involves substantial spending initiatives and changes the trajectory of the budget, then doing so could increase downward pressure on our rating and outlook for Australia.”

Holding the central bank’s more upbeat view on the economy than several forecasters, Dr Lowe said growth would gradually pick up from 1.4 per cent most recently to around 3 per cent in 2021, reducing unemployment and lifting inflation.

He added while the RBA board continued to discuss “what role it can play” in accelerating the process and QE may come into play “we are not at that point and I don't expect us to get there”.