The case for quicker tax cuts

Real retail sales fell 0.1 per cent in the September quarter, or 0.2 per cent over the year – the weakest result since 1991 when Australia was last in recession.

While consistent with the contraction in private domestic demand in the most recent national accounts, the slide in retail sales comes despite rate cuts from the Reserve Bank in June and July and a $7.7 billion injection to households from the Low-and-Middle-Income Tax Offset (LMITO) available from late July.

There are several reasons for this: many households are using rate cuts to pay down debt more rapidly, while our research has shown that the LMITO impacts a fairly narrow proportion of taxpayers and is having a smaller and slower boost to incomes than expected.

More broadly, a notable headwind to household spending is the fragility of consumer confidence. The Westpac–Melbourne Institute Consumer Sentiment Index slumped 5.5 per cent to a four-year low in October, mirroring weakness in business confidence and conditions.

The very low interest rates which the Reserve Bank has had to implement are now impacting confidence as consumers equate low interest rates with disturbing weakness in the economy. And we expect the RBA will cut once more in February, potentially as part of a package with additional stimulus taking the form of quantitative easing through a program of purchases of government bonds, residential mortgage backed securities and other corporate securities and, possibly, long term funding for financial institutions. 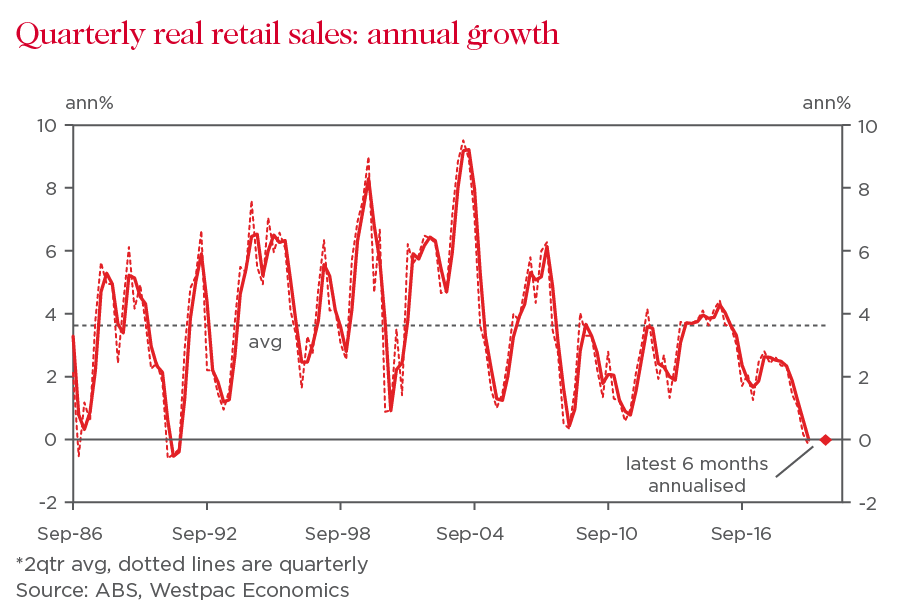 With other central banks in the US, Europe, Japan and China continuing to ease financial conditions amid softness in the global economy in 2020, the RBA will be under pressure to head off any unwanted upward pressure on the Australian dollar, which would occur if the Bank signals an end to its easing cycle.

However, as the RBA Governor has highlighted, monetary policy can’t carry the load itself – they require support from fiscal policy to boost demand.

The question then becomes what form?

With supply constraints, particularly in Sydney and Melbourne, for new large infrastructure projects, repairs and maintenance of existing infrastructure should be accelerated. Further commitments to aged care also appear likely to be unveiled in December’s MYEFO.

But we are less supportive of further business investment allowances given weak confidence and some credit constraints.

Rather, to boost demand it would be better to accelerate the second stage of personal income tax cuts which the government has already legislated for July 2022.

The constraint, of course, is the government’s commitment to achieving budget surpluses.

But there is a “middle ground”. 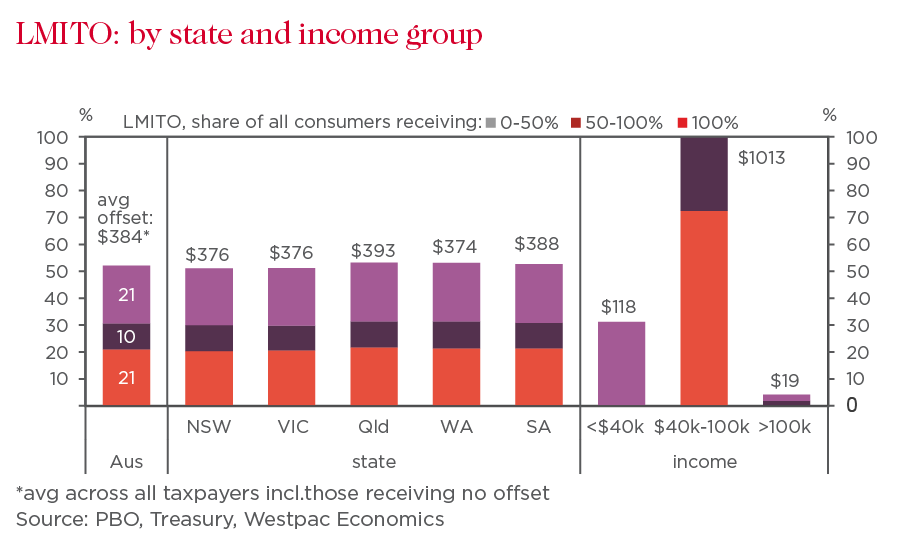 That change should cost around $7 billion in year one and $7bn in year two.

These are “thin” forward surpluses. But they can be fully justified by the need to bring forward structurally responsible tax cuts to complement monetary policy to boost demand. It would even be reasonable for the budget to assume a modest lift to underlying growth in response to the tax cuts in 2020-21 and 2021-22, improving the budget position.

As opposed to the recent lump sum payments that households may be being disappointed by, the tax cuts in the second phase are likely to have a more direct effect on household spending since they will show in households’ weekly after-tax income. As our survey showed, only around 16 per cent of consumers reported receiving a lump sum payment by early September. The October retail sales numbers confirmed there has since been little or no response to policy measures, pointing to clear downside risks for near term GDP growth.

As the policy debate around the May 2020 federal budget evolves, let’s hope the benefits to the economy of an immediate phased in introduction of the personal income tax cuts are recognised.