Last month, Argentina’s annual inflation rate came in at a staggering 52.5 per cent. Iran’s was 39.2 per cent, while in Zimbabwe – which has long battled surging prices – it clocked in at 54.5 per cent, prompting the central bank to hike its benchmark interest rate to 60 per cent.

Perhaps once dismissed as far away anomalies, inflation fears are suddenly rife everywhere.

Just this week, the US consumer price index jumped to a more than 30-year high of 6.2 per cent, a new environment for millions of American under the age of 40 that President Joe Biden assured he was alert to.

“Inflation hurts American’s pocketbooks, and reversing this trend is a top priority for me,” he said in a statement.

Contained since the 1970s and 1980s for much of the developed world, inflation is officially back as the pandemic disrupts supply chains, demand roars to life, borders remain closed and energy markets adjust to a range of complex forces colliding at the same time.

The trillions of dollars created by central banks since the global financial crisis may have thrown doubt over economist Milton Friedman’s famous quip that “inflation is always and everywhere a monetary phenomenon”, but the piles of cash thrown on top since COVID and doled out by governments is undoubtedly fuelling the fire.

Exhibit A: residential construction costs in Australia boomed at the fastest pace since 2000 in the September quarter, CoreLogic said this week.

So, is the inflation spike “transitory” or is the “genie out of the bottle?” That’s been the debate dominating financial markets for the past year, the transitory camp attracting more backers.

However, fears it may be more “structural” than just a short-term blip appear to be rising. Even the dreaded notion of “stagflation” – high inflation and low economic growth – has been thrown around.

“As was the case a decade ago, the Fed’s well-earned anchoring of medium-term inflation expectations affords it a unique opportunity to look through transitory inflation shocks…(and that) supports global growth,” JPMorgan’s global chief economist Bruce Kasman wrote this month, highlighting the US Federal Reserve’s position as the world’s most important central bank in this debate.

“But there is a global threat due to the need for a larger cumulative response if Fed judgment is wrong.”

For a world used to mostly falling interest rates over the past 30 years and expectations they would remain “lower for longer”, a reversal in rates to counter higher inflation is a scary possibility. Rising rates deflate most asset prices and markets are toppy as far as the eye can see, from Australian real estate to US stocks and bitcoin. For ordinary consumers, high inflation devalues savings, disproportionately impacts lower income households, and can become self-fulfilling – ultimately ending in recessions as central banks hike rates to stuff the genie back in the bottle.

With debt even higher than pre-COVID times, economies have never been more sensitive to higher rates. Indeed, economists suggests Australia’s bulging debt pile has pushed down the “neutral” level of interest rates – when employment and inflation are about right – to around 1.5 per cent.

But it’s as much the pace as the quantum of rate moves that matters, particularly when they’re at or near zero, as they also are in Australia with the cash rate at just 0.1 per cent.

Elliot Clarke, a senior economist at Westpac, says he agrees with the Fed that price pressures will prove transitory, noting fiscal support for consumer spending in the US is “fading quickly”, most prices across the economy have reset and global production backlogs are being worked through. “And, from a developed-world demand perspective…real wages growth is currently going backwards, and many have leveraged up to invest in housing with lasting consequences for discretionary consumption, particularly as interest rates rise,” he says.

Still, a Bank for International Settlements released this week reflected the even more uncertain future in a changed world that may not behave as in the past: “The direct inflationary effect of bottlenecks will likely be limited after relative prices have adjusted. However, sustained inflationary pressures could emerge if bottlenecks persist long enough to trigger an upward shift in wage growth and inflation expectations.”

Like the Fed, the Reserve Bank of Australia remains in the transitory and patient camp.

Even after it was revealed a few weeks back that the RBA’s most watched measure of inflation, the “trimmed mean” (or core inflation), jumped more than expected in the September quarter to an annual pace of 2.1 per cent, the Bank held strong that prices wouldn’t get out of control. 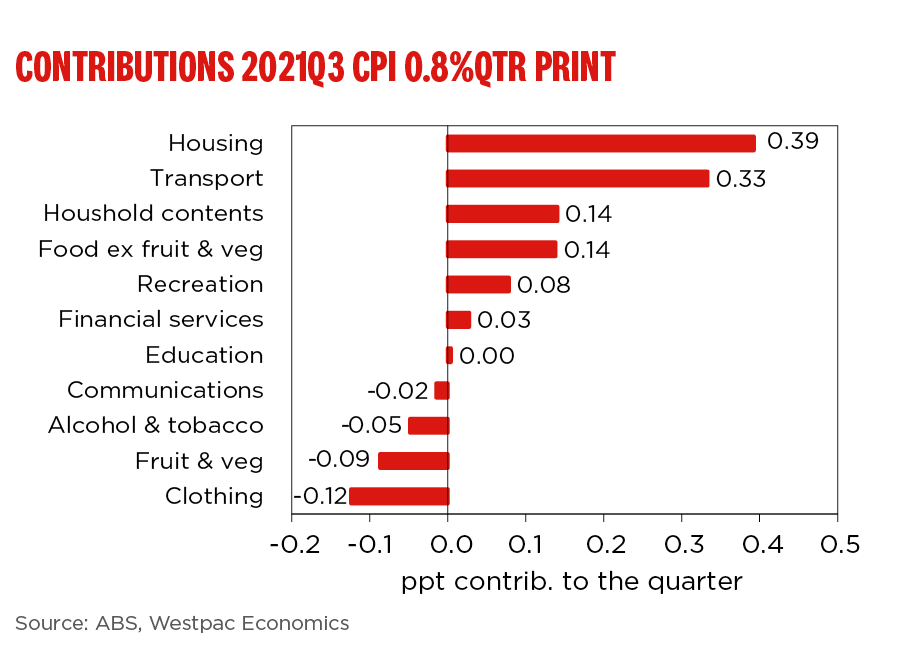 Sure, the RBA axed another of its COVID response policies – its “yield target” – and removed guidance that rate hikes were unlikely until 2024. But just sneaking inside its 2-3 per cent inflation target for the first time since 2015 didn’t completely ruffle the RBA, Governor Philip Lowe describing market pricing of multiple rate hikes in 2022 as a “complete overreaction to the recent inflation data”.

“We are prepared to look through spikes in the inflation rate,” he said. “For inflation to be sustainably in the target range, wages growth will have to be materially higher than itis now. This is likely to take time. The board is prepared to be patient.”

Given that, wages growth and employment are key.

To date, unlike other countries, there’s been little sign of inflation in wages. The Wage Price Index lifted just 0.4 per cent in the June quarter (the annual rate nudged up to 1.7 per cent), which Westpac economists said suggested “little pressure on wages outside some isolated cases”.

Ahead of fresh wages data next week, Westpac chief economist Bill Evans recently noted one issue is that unlike the 1970’s when “cost of living adjustments” figured in wage arrangements, this is no longer the case and wage increases are not “indexed” into the inflation profile. With employers less confident in their pricing power and many continuing to focus on cost control, the same kind of wage increases of prior eras is unlikely at a time when other long-standing deflationary forces such as technological advances, ageing populations and globalisation haven’t gone away.

Earlier this month, Governor Lowe added that even though wages growth is expected to have picked up to 3 per cent by the end of 2023, that is “still below the average over the two decades to 2015”. He added while the “global inflation shock” underway may hang around longer than expected and is ultimately “transmitted to Australia”, there were also good reasons why this won’t play out.

“The situation in Australia is different. We have not seen the same fall in labour force participation as experienced elsewhere, and the impact of other supply disruptions, including in energy markets, is less evident in our CPI (consumer price index),” he said.

“It is also relevant that the starting points for inflation and wages growth are lower in Australia than in many other countries. In addition, our business liaison suggests that wage growth remains modest, although there are some hotspots. Wages growth is expected to pick up as the labour market tightens, but this pick-up is expected to be gradual.”

As for the labour market, lockdowns in recent months have unsurprisingly stalled the recovery.

According to ABS data released yesterday, employment slid in October and the unemployment rate jumped to 5.2 per cent. But economists pointed to timing issues with the survey and some positives in the report, such as a relatively small decline in hours worked, and expect the jobs market to recover in the festive months ahead.

Giving reason to cheer, the Westpac-Melbourne Institute Index of Consumer Sentiment this week revealed Australians were the most upbeat about unemployment expectations since the mid-1990s when the economy was last rebounding from recession, albeit a very different and shallower slump than last year’s COVID-induced one.

So, how “patient” will the RBA be as inflation stirs?

Despite the RBA holding onto its scenario of the first cash rate hike occurring in 2024, Evans still believes it won’t be able to be as patient as they’re letting on.

He says their forecasts are too cautious and that by February 2023, the RBA will be armed with fresh inflation data confirming core inflation above 2.5 per cent for several quarters and begin the first hiking cycle in more than a decade amid decent wages growth and low unemployment.

But he sees the cash rate cycle being capped at 1.25 per cent in late 2024 – not that far above pre-COVID times.

Those were clearly very different times and inflation is undoubtedly back.

But betting it’s set to take off in Australia and be far higher than prior to the pandemic still feels like a big bet to make.