Usually when politicians investigate regulating a hitherto untethered sector, industry groups and incumbents are quick to argue it should be allowed to continue to roam free.

But when it comes to bolstering the oversight of the burgeoning cryptocurrency sector, participants agree that driving the ‘wild west’ elements out of town will only enhance the sector’s growth and respectability.

And they can’t be their own sheriff.

In its eagerly anticipated final report, the Senate select committee into Australia as a Technology and Financial Centre last week laid out how the country should tackle this issue once and for all to ensure we become a favoured regime for digital asset enterprises, notably cryptocurrency and blockchain innovators.

It was mostly cheered, Shane Stevenson, the chief of crypto exchange Cointree, saying: “With the committee recommending things like capital requirements and auditing, it will help protect consumers and strengthen exchanges.”

“It’s clearly a sign that the industry is maturing.”

The backdrop is the enthusiastic take up of cryptos by Australians, mainly for an investment than an everyday means of exchange. It also comes as the crypto world’s poster child, bitcoin, goes on another run amid hype surrounding the launch of the first bitcoin exchange traded fund in the US, “BITO”, and as investors clamour for a hedge against rising inflation.

While estimates vary, a survey by comparison house Finder also released last week found that 18 per cent of adult Australians own cryptos, which makes us the third most ardent crypto investors behind only Nigeria and Malaysia.

The Senate inquiry’s chairman Senator Andrew Bragg notes the “scale and speed” of the growth of digital currencies has taken government and regulators by surprise. In recent years, it’s been adopted by a slew of global mainstream financial institutions, despite the lack of prudential oversight and a long queue of high-profile crypto sceptics.

As the Reserve Bank of Australia says in its submission, cryptos have “no intrinsic value, are typically not issued by any single entity and effectively rely on users’ complete trust in the software protocols that control the system”.

Still, with it unlikely digital assets are going away, Senator Bragg believes Australia can benefit from the space, delivering Aussies “new choices and lower prices” along the way.

“The committee has recommended a comprehensive crypto framework to deliver Australian leadership. We’ll be competitive with Singapore, the UK and the US,” he said.

“This will drive investment and jobs into Australia.”

The committee’s 12 recommendations include a licensing regime for digital currency exchanges, or DCEs, which be subject to capital adequacy, audits and ‘responsible person’ tests. Investors’ crypto holdings would be protected by custodial arrangements.

The report also canvasses a “central bank digital currency”, or CBDC, with the idea to be furthered by a Treasury review. The cyber coins would be issued by the RBA and thus a sovereign currency, interchangeable with the dollar.

To be clear, the RBA itself has repeatedly made clear it’s not yet convinced about the need for a retail CBDC. So far, only the Bahamas has issued a fully operational CBDC, with China in the advanced stage of testing a “digital yuan”.

One of the committee’s key recommendations is a new legal structure called a Decentralised Autonomous Organisation (DAO), which sounds a bit like the ramshackle autonomous collective dreamed up by the repressed peasants in Monty Python and the Holy Grail.

In reality, a DAO structure would address the problem of blockchain-based projects (such as ‘crypto’ development) not falling within traditional corporate entities. A DAO would look more like a partnership, without a traditional board governance but with the dispersed parties covered by limited legal liability.

The sparse US state of Wyoming – cowboy territory in the literal, rather than governance sense – is an unlikely global leader in fostering DAO structures.

Other measures relate to clarifying the capital gains tax rules pertaining to digital assets and tackling the issue of “de-banking”, by which traditional banks are reluctant to fund or service digital asset enterprises. The report warns that de-banking risks driving the sector to less regulated channels not subject to anti money laundering laws, but concedes it’s a “complex problem occurring for a number of reasons.”

Topically given the Glasgow climate summit kicks off this Sunday, the report acknowledges that creating cryptos – so-called mining – entails enormous power usage. That’s why crypto miners have flocked to Scandinavian countries such as Iceland, with ample access to renewable power.

The report opts for the juicy carrot over the stick, proposing a 10 per cent corporate tax discount for local ‘miners’ availing of renewables.

Globally, the crypto sector is thought to be worth a cool $2.8 trillion, with 221 million citizens having traded cryptos or used blockchain applications (blockchain being the foundation ‘distributed ledger’ on which cryptos are based). 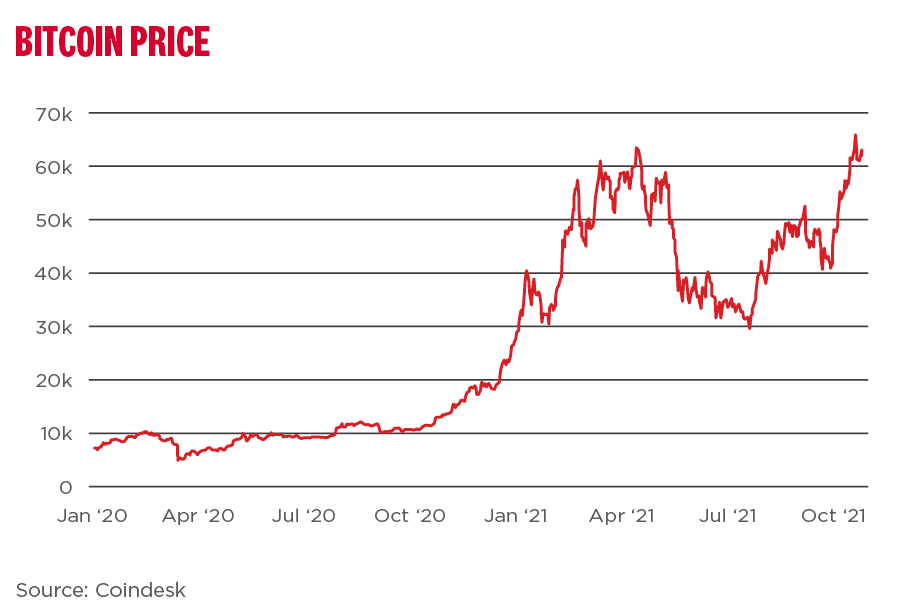 Some crypto advocates contend the new BITO fund launched last week by ProShares – which deals in crypto futures - will spur a fresh wave of capital into the sector. Others, such as strategists at investment bank JP Morgan, note the fund joins a crowded market of Canadian-domiciled exchange traded fund.

Regardless of where the notoriously volatile bitcoin price is headed in the short-term, James Manning, chief executive of cryptocurrency miner Mawson Infrastructure, said the Senate inquiry’s “well thought out” recommendations will incentivise both renewables and digital asset mining in Australia.

Adrian Prelozny, head of the crypto exchange Independent Reserve, added that the reforms would “weed out the players that aren’t taking it seriously, protect consumers and give us a chance to really grow the industry here”.

Even for a smash hit there’s always the naysayers, with venture capitalist Mark Carnegie denying the report a perfect Rotten Tomatoes score, as movie enthusiasts would say.

Carnegie says Crypto Gaming United, one of the ventures he has backed in the space, “got driven out of Australia because of ambiguity and is now headquartered in the more progressive Singapore”.

Senator Bragg hopes that the review’s recommendations can be legislated within 12 months, but Carnegie pledges that if that happens “I will host a party at Bondi Icebergs for everyone”.

However it pans out, with the recommendations firmly on the table, the crypto sector can clearly no longer be dismissed as the domain of tech ‘geeks’ and shadowy elements.


The views expressed are those of the author and individuals quoted, and do not necessarily reflect those of the Westpac Group.

SocietyOne on board Westpac’s BaaS platform