Dawn of the official digital currency?

Long before last year’s bursting of the bitcoin bubble, the traditional idea of money has been rapidly evolving.

Not only have the number of active “cryptocurrencies” surpassed 200, five central banks are undertaking “pilot projects” to potentially issue “central bank digital currencies”, or CBDCs, according to a new survey by The Bank of International Settlements.

Uruguay just completed its pilot for a general purpose CBDC, or e-Peso, that began as part of a broader programme of work in 2011. In Sweden, where years of declining cash use has raised concerns retailers will eventually stop accepting cash due to the rising cost, the central bank began working on an “e-Krona” project in early 2017.

There’s also the emergence of “tokenisation”, where a business might issue their own currency and digitally source investment on global crowd funding platforms, and seemingly ubiquitous acceptance by merchants of contactless payments via digital wallets and wearables.

The days of people fumbling in their pockets for coins to buy a coffee appear numbered.

“Although paper-based payments like cheques and cash still play important roles, new technologies and market entrants are challenging the traditional bank-based payment systems. In addition to changes in how payments are made, even the type of money used could be changing,” the BIS said last month.

According to the Reserve Bank of Australia, the percentage of payments made in cash halved to 37 per cent in the decade to 2016, and is likely to have fallen even more in the two years since then. At the same time, the number of electronic payments Australians make has increased from around 100 per year at the turn of this century to just under 500 today.

“For some decades, people have been speculating that we might one day go cashless … it looks like a turning point has been reached,” Reserve Bank Governor Dr Philip Lowe said in a November speech.

“(This) greater use of electronic payments can bring efficiency benefits, with lower costs and more functionality and choice for users.” 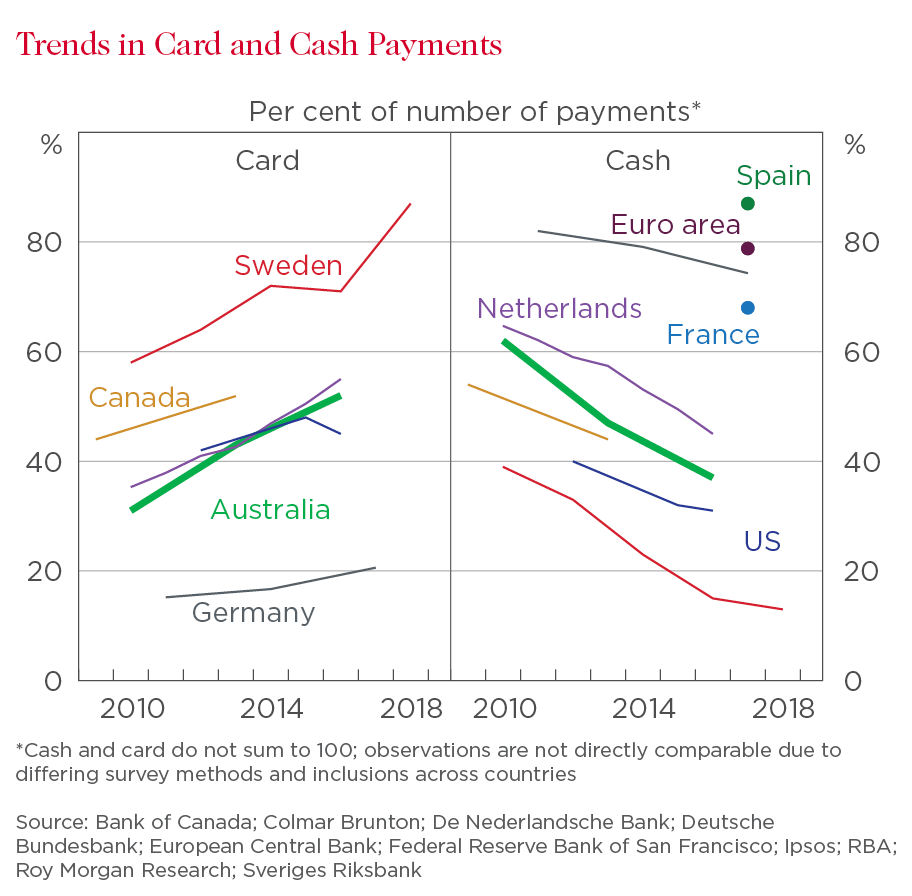 Driven by the uptake of payments app called “Swish”, Sweden is on course to become the world’s first cashless economy with cash currently comprising barely 12 per cent of all transactions.

In early 2017 it spurred Sweden’s Central Bank, the Riksbank, to begin its eKrona project, which involves planning for a prepaid value and traceable digital currency that would sit alongside the established Krona. The next step is a pilot project to investigate “a prepaid value, non-interest bearing and traceable e-Krona”.

And the Swedes aren’t alone: the BIS survey of 63 central banks late last year on their plans for digital currencies found 70 per cent indicated they were working on CBDC projects. However, most central banks are “proceeding with caution” and work is “primarily conceptual”.

The RBA, for one, has shown little urgency for issuing an electronic version of the Australian dollar, or an eAUD, Dr Lowe in November confirming there remained no “public policy case”.

“In particular, it is not clear that RBA-issued electronic banknotes would provide something that account-to-account transfers through the banking system do not, particularly with the emergence of the New Payments Platform,” he said, adding there were also considerations around implications for financial stability.

Launched early last year after being built by several banks and the RBA, the NPP is the nation’s new state of the art payments infrastructure that allows near instant payments 24/7, through the use of basic identifiers such as mobile phone number. Usage and rollout by banks has picked up with around 400,000 NPP transactions per day as of late November, leading to predictions of ongoing declining cash usage and new innovation. 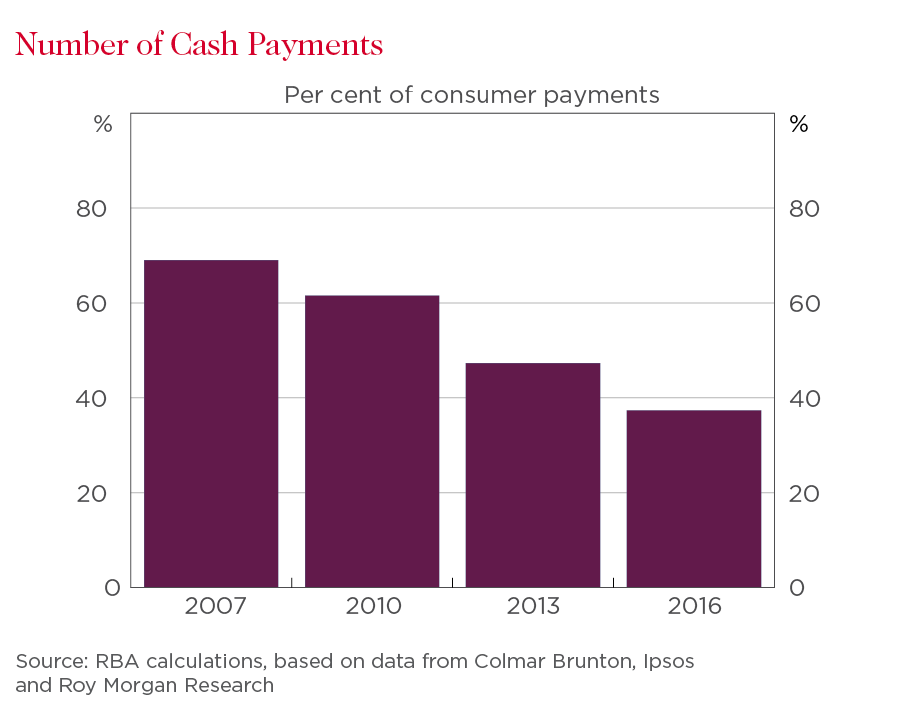 For most people who physically handle less and less cash, the difference between an official central bank digital currency, say an eAUD, and the digital payments they make on a daily basis may seem trivial. Electronic banknotes or “tokens” could coexist with the incumbent banking payments system, just as polymer banknotes do today. But for officials such as the RBA, many questions remain, including the actual need given investments such as the NPP, technology requirements and ongoing demand for cash among parts of society.

Central bankers globally have also criticised new cryptocurrencies, such as bitcoin, operating away from official rules and systems through the blockchain distributed ledger technology, arguing they’re expensive, volatile and have few use cases.

But supporters of crypto currencies are attracted by the idea of creating a financial ecosystem outside of the supervision of the current monetary system.

“Central banks are issuing currency without sufficient trust in the system, and they are creating money out of nothing,” argues Yousef Hosseini, pointing to the stimulus – often dubbed “money printing” – injected into economies since the global financial crisis.

A Sydney based entrepreneur who is creating a global crypto exchange he calls the New York Digital Asset Exchange www.nydax.com, Hosseini is in the process of launching a platform which is not only an exchange for crypto currencies, but a way to effectively securitise the value of intellectual property (IP) through digitisation.

“We are trying to change the rules around the funding of innovation and research,” says Hosseini, a computer engineer and solutions architect who has worked with Accenture, PwC and Deloitte.

“We want to combine a crowd funding approach with the issuing of tokens to really democratise research and create a new liquid market.”

It would work something like this: a research team working on a new innovation would issue digital tokens “listed” on NYDAX, where investors can buy them. The investments fund the research via one universal token, ownership of which is also immediately split up and transferrable to investors through a “blockchain”.

“If you bring innovation into this space and tokenise it through technology using a crowd funding system, then this provides liquidity for a small start-up,” says Hosseini.

“I think this has the potential to change the game of where money wants to go.”

Not everyone is so enthusiastic about the future of crypto currencies.

Sydney-based fund manager Michael Glennon, an outspoken critic of crypto currencies, points to the recent $US30 million “Pure Bit” scam in South Korea, which saw executives at two cryptocurrency exchanges charged with fraud, as evidence against the ethics and viability of the new crypto world. 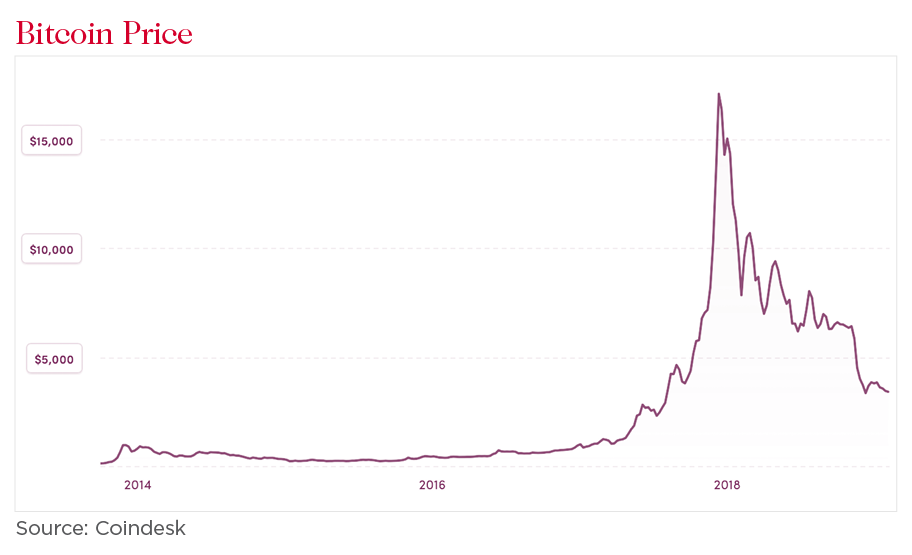 “There are no barriers to entry. I can start some new currency tomorrow but there is nothing that underpins the value of it,” he says.

While a sceptic on crypto currencies, Glennon believes that blockchain technology has its uses and that ultimately, one or two of the crypto currencies might survive, in the same way as some companies survived the dot.com crash of the early 2000s.

“But I’m not a believer, and we’ve been right on the price (of Bitcoin) so far,” he says.

“I’ve got friends who have been in it, and they’ve all lost money.

“Last year, every taxi driver was talking to me about Bitcoin, now they don’t even mention it.”