No prize for guessing what featured in the “pressing challenges” section of the latest review of Australia’s payments system.

While Scott Farrell’s Payments system review: From system to ecosystem report for the federal government devotes much of its 115 pages to getting the “regulatory architecture” right for what’s to come, it was always going to be impossible avoiding the here and now issues dominating the headlines.

Discussion around one of the most divisive, BNPL, hit fever pitch last month after Afterpay agreed to a $39 billion buyout by US payments player Square in Australia’s biggest ever takeover. Meanwhile, the parliament is part-way through an inquiry into mobile payment and digital wallet financial services, while cryptos and CBDCs attract more and more interest by the day.

Just this week, the RBA revealed a project working with a handful of other central banks to test the use of CBDCs for international settlements.

As Farrell notes: “The emergence of this new ecosystem has already begun, with developments such as digital wallets, buy-now pay-later and cryptocurrencies showing the way. And there will be many more to come.”

“The evolution of the nature and methods for payments will provide convenience for consumers and opportunities for businesses, but it will also increase complexity and risk. Our regulatory architecture therefore needs to support the payment system through this transformation, so that Australians can enjoy the benefits with confidence.”

The thing about payments is it’s arguably most noticed by consumers and businesses when it’s unenjoyable – when it breaks. When the financial system’s “plumbing” works – and with increasing ease by tapping phones or clicking the BNPL button – the complexity and regulation of payments largely goes unnoticed by most, particularly in Australia where things have been pretty good. We have brand new, real-time infrastructure with the New Payments Platform, a strong banking system, world-leading start-ups and fintechs, and rising data sharing under the Consumer Data Right.

But, like most things these days, keeping up is key.

“Although what we have has served us well, it is now time for an upgrade. A world-class digital economy needs a world class payments ecosystem,” Farrell concludes, noting regulation has been largely unchanged since the 1997 Wallis Review.

That revised architecture would be based off the review’s 15 recommendations.

They include beefing up the role of the Treasurer of the day to provide “enhanced leadership, vision and oversight” due to the rise in complexity and innovation, and appointing a “payments industry convenor” to assist Treasury. 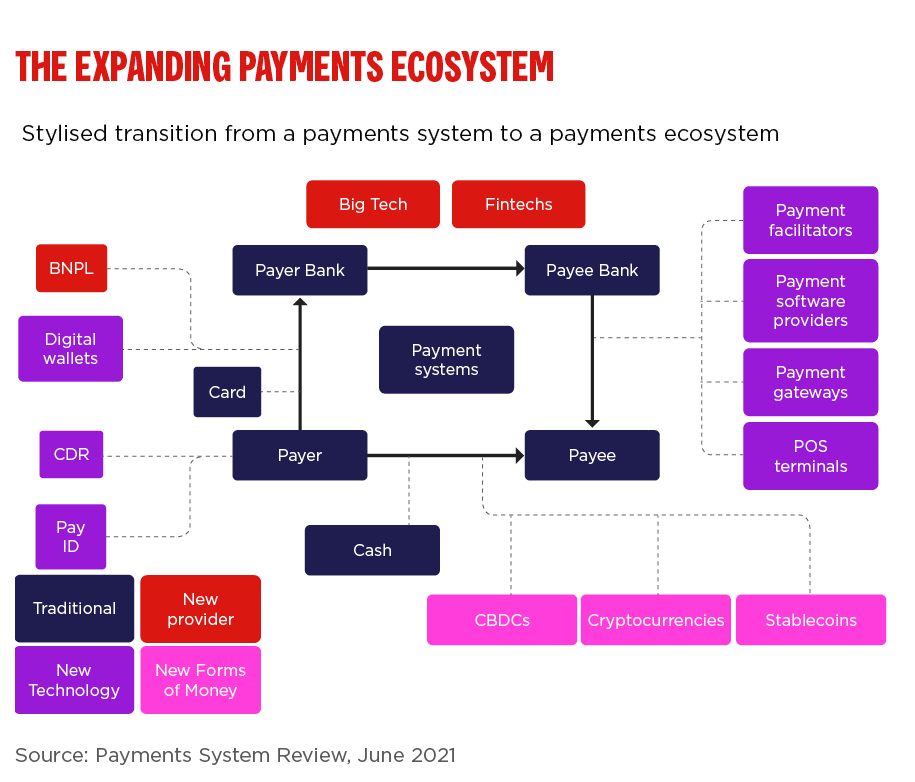 Another recommendation calls for Treasury’s enhanced role to improve coordination between the various payments regulators, which include the RBA, Austrac, The Australian Securities and Investments Commission, The Australian Prudential Regulation Authority and the Australian Competition and Consumer Commission.

The Treasurer would also be granted a “national interest” power to designate “payment systems” and give binding directions to operators, and prompt regulators to step in. Meanwhile, the ePayments Code should be mandated for all payments licensees and a single payments licensing framework brought in, it said.

But it’s the issue of payment systems that is arguably the most topical, after RBA Governor Philip Lowe last month suggested “payment services” may be a more appropriate term for the times following the rise of digital wallets and big techs such as Apple in the space via Apple Pay.

Notably, recommendation six appears to veer into the ongoing tension relating to digital wallets – which aren’t deemed a payment system or required to meet any standards around availability or accessibility – and deliver what the RBA wanted: changes to the Payment Systems Regulation Act.

It says the definition of a “payment system” should be expanded in the PSRA to “broaden the RBA’s ability to designate new and emerging payment systems”.

“The definition may no longer adequately capture the full suite of payment systems within the ecosystem and, as a result, there are providers that could fall outside the regulatory scope of the RBA,” the review states.

“Expanding the definition of a ‘payment system’ … would provide additional flexibility for the RBA to designate in the public interest in accordance with the PSRA, and allow it to better respond to financial stability, efficiency or competition risks posed by new innovations in the payments ecosystem.”

Referring specifically to digital wallets, the review suggests the “appropriate storage, collection and use” of the massive amounts of data generated should also be considered. It also points out that digital wallets could expand into transacting funds or assets such as foreign currencies, cryptos and foreign CBDCs, including by operators outside Australia who aren’t subject to the same regulation.

“The recommendations put forward by this review could support a targeted and proportionate response to these regulatory challenges,” it says.

As for BNPL, dubbed a “recently new phenomena”, the review says it’s not yet been tested whether it meets the definition of a payment system under the PSRA and “the regulatory settings for specific systems and services” is beyond its scope, including whether or not it’s credit. “However, it is clear that the BNPL sector is growing rapidly …. and it is important the regulatory architecture is sufficiently comprehensive to enable the regulation of new business models like BNPL, should the policy rationale to do so be established,” it says.

The government will consider and consult on the recommendations and observations before finalising a response before the end of the year, when the RBA will possibly have concluded its separate review of the regulatory framework for retail payments.

Grant Halverson, the managing director of Mclean Roche, expressed concerns that the process was moving too quickly, claiming payments will “see more change in the next 10 years than the last 30 years combined”, and developments like the internet of things, artificial intelligence and biometrics, didn’t “rate a mention” in the Farrell review.

“Payments in 2030 will revolve around fully portable 'digital' consumer and business IDs which are supported in cyberspace and do not require a card, watch or phone – rather a consumer 'calls up' the ID at any point of sale and confirms the sale using bio-metrics and security features which work in person or remotely for digital and ‘eCommerce’ transactions,” he says.

To be sure, there’s undoubtedly a lot to take in and the rapid pace of change isn’t making an already complex space any simpler, as Farrell doesn’t shy away from.

“Payments can be an arcane area of great complexity,” he concedes. Indeed, the review adds that the digitisation of payments over the years means many payments are “effectively data transfers, and the payments ecosystem is becoming a subset of the broader data ecosystem”. Several other countries have already modernised their regulatory approaches, Farrell adds.

Hence, he argues a speedy response.

“We cannot delay,” he says.

With payments being a far from static space, it's hard not to agree. The key will be to keep adapting quickly to the innovation that will inevitably keep on coming.

As RBA Governor Lowe said last month: “Our regulatory arrangements need to keep pace with the fast-moving landscape, and I would encourage the parliament to, over time, adjust (these).”