JobKeeper has provided extraordinary support to individuals and businesses since the onset of the COVID-19 pandemic. Unsurprisingly, with the conclusion of the program fast approaching at the end of March, there’s questions around how the economy can cope, even with the federal government’s fresh $1.2 billion package for the tourism and aviation sectors.

First off, the labour market is clearly recovering.

That’s not to say that everything is even. Some industries – arts, recreation, accommodation and food services – will continue to face significant challenges. But the end of JobKeeper will only temporarily slow the recovery and the broader “fiscal cliff” we once feared has actually been averted.

There are good reasons why.

The support provided by JobKeeper has already stepped down significantly. At its peak in 2020, around 3.6 million workers were on JobKeeper. By the end of January, that number had shrunk to 960,000. When JobKeeper ends in a few weeks, the figure should be lower again.

Add to this the strengthening economic recovery and it’s safe to say we are heading towards a “financial slope”, rather than a “financial cliff”.

The economy grew at a blistering pace of 3.1 per cent in the December quarter, following strong growth in the September quarter. This growth has led us to revise up our economic growth forecast for 2021 to 4.5 per cent. Low interest rates, infrastructure spending, the upturn in the housing market, the vaccine roll-out and solid spending by consumers are supporting the economy.

Economic growth of 4.5 per cent is well above “trend” growth levels and will see the creation of more jobs, business investment and housing construction.

It’s worth noting that the jobs market has already almost fully recovered all of the jobs lost during March to May 2020 – 99.8 per cent to be precise!

Moreover, the unemployment rate has declined from 7.5 per cent in July 2020 to an 11-month low of 5.8 per cent in February 2021. While that remains 0.8 percentage points higher than its low in February 2020, it’s still far better than feared in the depths of the crisis a year ago. 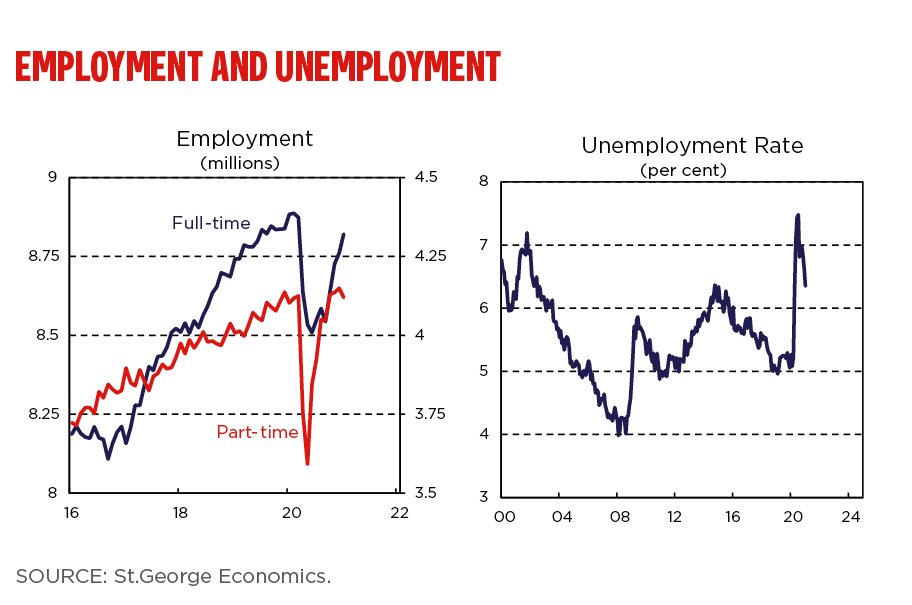 Encouragingly, leading indicators of labour market demand, such as job advertisements and vacancies, point to further jobs growth over the coming months.

If we look across the country at the differences in labour markets and within industries, there is, however, a more nuanced cliff-to-slope story.

Across industries, some have also received more support from JobKeeper than others.

In the December quarter, the construction and professional services sectors accounted for the largest dollar value of JobKeeper payments. These industries are huge employers. Sole traders and other small businesses dominate business in Australia and so made up a large share of the organisations on JobKeeper. For a better measure of the industries relying on JobKeeper we’ve taken a look at support payments as a share of total wages paid. According to this metric, arts and recreation was the worst hit sector in the December quarter. JobKeeper payments were the highest in this industry as a share of wages, sitting at 25 per cent. The second most reliant industry was the accommodation and food services sector, JobKeeper payments accounting for 16.6 per cent of wages paid.

The hospitality industry has suffered immensely from restrictions, and with international borders due to remain closed until late 2021, the lack of foreign tourists will continue to weigh on this sector for some time.

It’s worth noting that the number of people employed working zero hours for economic reasons was around 127,000 in February 2021, well under the peak of around 770,000 in April 2020. This number refers to people who were employed but stood down or where there was insufficient work available. This cohort is likely to be receiving the JobKeeper payment and are the most vulnerable to unemployment when the program ends.

Inevitably, there will be job losses in coming months and a temporary slowing in the recovery in the labour market. Of course, it is difficult to know precisely how many people will lose their jobs.

The government has been at pains to underscore that it will be a small share of recipients and based on strength of the recovery to date, we agree.

We estimate 60,000 – 140,000 people could be stood down at the end of JobKeeper. Some people on JobKeeper are employed and will remain employed, some people will find a job quickly in the recovering jobs market and some people may drop out of the labour force for a time.

Job losses are likely to be concentrated in industries exposed to travel restrictions and ongoing social-distancing regulations – accommodation and food, arts and recreation, travel agencies and related services and air transport. These industries have more employees working zero or low hours.

However, the government’s recent support package for the travel, tourism and aviation sectors should help ease some of the pain when JobKeeper ends.

We’re predicting a baseline scenario where the unemployment rate remains near the current level until the end of June before it resumes declining to end the year at a lower unemployment rate – a relatively quick improvement compared to prior recessions.

JobKeeper has lived up to its name.

And thankfully, the economy is bouncing back faster than expected alongside the conclusion of the program, which always had to come at some point.