Rising out of the COVID ‘shecession’

During the long months of COVID-19 lockdowns last year, Queenslander Kelly Patterson had a one-year-old to care for, two children to home school and a business to run.

Her husband, a truck driver, was deemed an essential worker and was often away, so she also shouldered the entire domestic load.

Unsurprisingly, Patterson rarely managed to finish her day’s work within business hours, so she continued after putting her children to bed. She often finished at 2am and was up through the night to settle her youngest.

“The alarm would then go off around 7.30am and I’d do it all again,” she recalls.

Patterson runs workplace safety company OHS Compliance Solutions, and from May last year she began to receive an influx of requests from companies seeking guidance on how to implement mass work-from-home policies. She got “busier and busier”, working from 7am to 7pm without a break in the lead up to Christmas, before exhaustion and illness set in.

She has only just begun working again, suffering a significant financial hit from the time off.

“One day I woke up and I just could not think. The only way I could describe it to my husband was that I had broken my brain,” she says.

“To me, it highlighted that you can't be a worker and a parent at the same time. I tried to do everything and it was nearly impossible.”

Globally, women have been struck harder than men by the economic fall-out from the pandemic – inspiring the term “shecession” – as female-dominated industries were hardest hit: hospitality, recreation, accommodation and tourism. Most previous recessions, including the 2008 global financial crisis, saw men largely shoulder the job losses in the financial and construction sectors.

“Normally you get an imbalance in asset prices, or a central bank raising interest rates, or a government doing something on fiscal policy – or there is some form of external shock. This time it wasn’t production but services that were affected most, because the government had to stop social interaction for health reasons.”

“While women did seem to regain more jobs than men as the economy began to reopen, the larger recovery in female employment has not been enough to make up for the larger hit to employment from the COVID lockdowns,” Smirk warns. 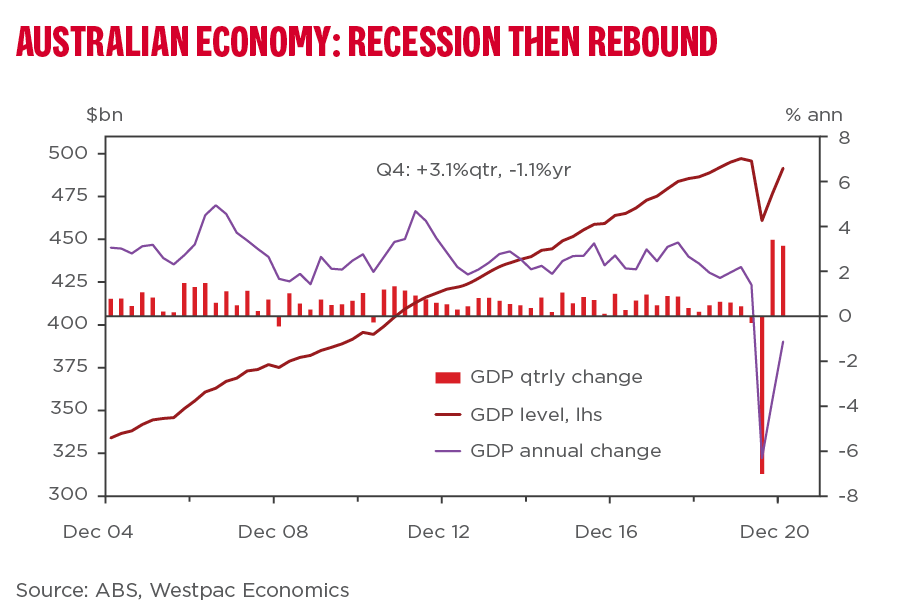 Nicole Mason, president of the Washington-based Institute for Women's Policy Research, last year coined the term “shecession” to describe a recession that affects women disproportionately. She believes that the United States is already deep into a she-cession. In contrast, Smirk’s analysis shows the situation is markedly better in Australia – in part due to JobKeeper offsetting much of the harm caused by mass job losses.

ABS quarterly data from November showed that there were 45,000 fewer young women with a bachelor's degree and above in jobs compared to February 2020. For men, the decline was much smaller, at 3600. One reason is that women are more likely to be in less secure casual and part-time work. “It is also difficult to discount a degree of discrimination,” she says, adding that another reason is the government’s focus on stimulating industries such as construction relative to education and aged care.

“This divergence between young men and women is concerning, because if this group of women falls behind, it will put back gender equity in Australia by another generation.”

Nancy Hillary, 51, is “terrified” about JobKeeper coming to an end late next month.

Her Greater Sydney-based entertainment agency, All Things Entertainment, has experienced a 99 per cent loss of revenue over the past year. While she had her first booking for a show this month, it failed to make a profit due to ongoing capacity restrictions. She has made ends meet by withdrawing superannuation and retraining to make money through “side hustles”. She also wasted countless hours applying for jobs, only to get one interview.

“Some jobs I applied for had 500 applicants. Most of them were entry-level positions – I even applied to become a mushroom picker,” she says. “I’ve been self-employed for 25 years and now I can’t cover the basics. It’s been devastating.”

Smirk contends that women will be hurt more than men when JobKeeper ends.

“A meaningful rise in unemployment creates what we call an ‘economic deadweight loss’,” he says. “That is to say, people who lose their jobs during a recession, or enter the workforce during a recession will always have, on average, lower income and wealth than those who didn’t.”

Going forward, another major factor in repairing the level of female employment in the workforce is likely to be a long-standing issue: the high cost of childcare.

While the government last year temporarily made childcare free, fees have returned to pre-COVID levels and some experts say now is the time for reform. As it stands, Jackson says many households are making decisions about whether or not to work based not on whether they want to, but how much childcare will cost them and if it’s worth it.

“The government needs to focus on the fact that this recession is different from others in the past,” says Matt Grudnoff, an economist from the Canberra-based thinktank, the Australia Institute. “Publicly funded early childhood care would directly employ a lot of women, provide fiscal stimulus in the short term and boost long-term participation rates.”

One positive aspect of Covid-19 lockdowns, however, has been the newfound acceptance of more flexible working, such as working from home. According to Smirk, this will enable parents to more evenly share caregiving duties, a benefit for men and women.

He adds that female participation in the workforce has been steadily growing over the past decade as part of an underlying trend caused by more women studying at university, entering the workforce, returning to work after having children, and remaining in the workforce longer. At the same time, Australia’s economy is moving away from being production-based to services-based, which tends to produce more opportunities for women.

“However, women could potentially argue that their economic clout is not improving as quickly as their economic share of activities. It is lagging behind more than it should be,” he says.