On a conference call with analysts last month, JPMorgan chief Jamie Dimon didn’t hold back when pressed on growing competition from tech players.

“Visa, $US500 billion; MasterCard, $US350 billion; PayPal, $US220 billion; Ant Financial, $US600 billion; Tencent, $US800 billion; Alibaba, $US1 trillion. Facebook, Google, Apple, Amazon, you can go on and on,” he said, referring to their market capitalisations.

“But absolutely we should be scared sh*#less about that.

“I expect it to be very, very tough, brutal competition in the next 10 years.”

For an industry still at the centre of the response to COVID-19, it was a sobering reminder the big issues facing banks haven’t gone away.

If anything, they’ve accelerated.

“Digital payments have soared — achieving as much as 10 years’ growth in just four months,” consultancy EY cites as an example of the pandemic’s impact in its Global Banking Outlook 2021 report. Of course, there’s also been the immediate financial pressure as banks raised provisions last year amid the fastest and deepest downturn since the 1930s. S&P Global Ratings this week forecast the world’s banks to suffer around $US1.8 trillion in combined credit losses in 2020 and 2021 – 15 per cent lower than previously expected, but an eye-popping number nonetheless.

Still, EY notes banks have proven “remarkably resilient” to the “live stress test” COVID presented. The upheaval has also provided a “once-in-a-generation opportunity for banks to transform themselves” for the rapidly changing world Dimon was referring to.

“Many of these issues — for example, the need to transform processes heavily reliant on manual intervention — were already in view, given the long-term shifts within the sector, but the crisis has accelerated the need for action,” EY says, singling out “cost management” as an area banks must double down on.

“Incumbents also have a chance to catch up in an area where challengers have historically led — in the ‘race to innovate’.

“While many challengers are focused on a path to profitability, traditional banks have an opportunity to accelerate their digital transformation, particularly while expectations around short-term returns are lower than normal. Meanwhile, challenger banks must race to scale —but they can no longer do so at the expense of profitability.”

These observations have already been playing out in Australia.

A little over a year since receiving its banking license, neobank Xinja recently closed its transaction and savings account products and handed back its licence, citing a more difficult capital raising environment and COVID. EY says the pandemic has clearly caused fintechs’ “race to scale” to hit “turbulent water”, but adds that banks too have suffered profitability headaches, namely higher provisions and squeezed net interest margins. Meanwhile, many tech companies have flourished as consumption and commerce shifted online.

McKinsey’s latest global banking report argues that the challenge to banks from fintechs and the major tech platform companies has been one of two key issues facing the industry for some time, the other being ongoing low and negative interest rates. Not only do low rates impact banks’ earnings directly, but money is cheap and abundant for start-ups as they eye off financial services profit pools.

McKinsey says one of the shifts in recent years amid low rates has been the higher valuations investors have placed on business models that rely on fees, such as payment networks, relative to “risk-intermediation businesses” like traditional banks. As such, many fintechs and tech platforms often are going after areas where they don’t have to rely on interest income to succeed.

In addition, “larger platforms monetise customer data and engagement from financial services to fuel their other businesses”, McKinsey says. “As a result, they are focused on offering customers a seamless customer experience along an end-to-end journey, innovative products, and attractive rates that will drive engagement.”

JPMorgan’s Dimon, one of the world’s most high-profile bankers, said he remained confident the bank could compete and win against the “whole generation of newer, tougher, faster competitors” coming at them. But he noted some benefited from access to the banking system’s existing “rails” and other also had very strong positions in their existing businesses, or near “monopolies”. He predicted payments would be an area “everyone is going to be involved in”.

“They're strong, they're smart, some effectively ride the rails,” he said of tech players on last month’s call.

“But we have plenty of resources, a lot of very smart people; we’ve just got to get quicker, better, faster. We've done an exceptional job, if you look at what we've done… but the other people have done a good job too.”

The consultants point out that many large banks reacted “nimbly” to COVID and continued to invest, particularly in digital channels, just like tech companies did. Other analysts add that some large banks have also gained market share. Provided they are “willing to do the hard work necessary on productivity and capital management”, McKinsey predicts banks globally can regain their 2019 return on equity within five years. 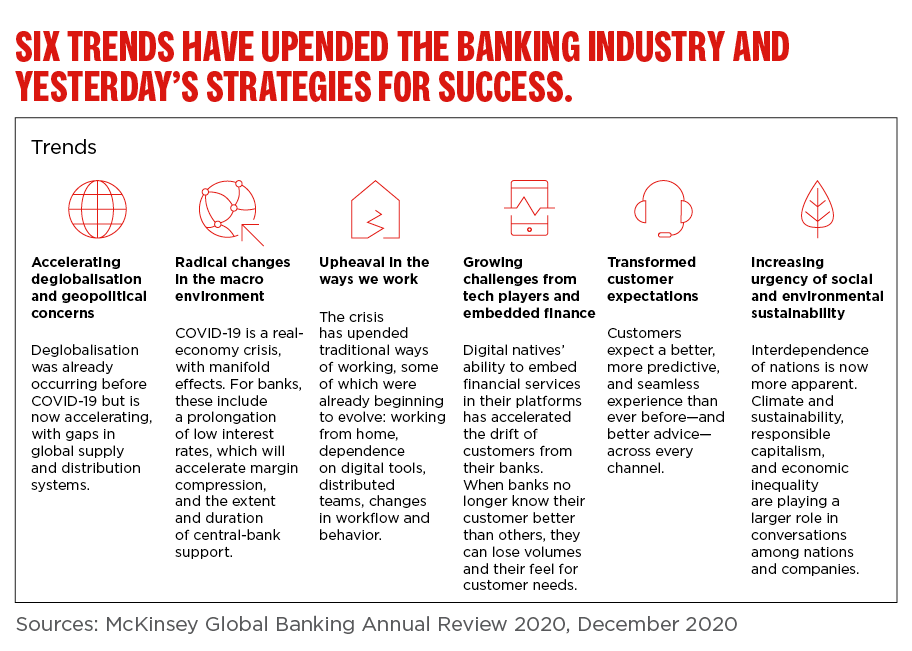 To ensure they "not only survive but arrive in style ahead of their rivals", McKinsey says banks should prioritise action across three areas: “muscle” (the way they get things done), “bones” (the way they are structured), and “spirit” (their reason for being). This includes entrenching the heightened focus on customers during COVID and reinventing their business models, including by partnering with and embedding themselves in the “platforms and ecosystems challenging them”.

In Australia, Westpac has long partnered with and invested in fintechs, both directly and via venture capital firm Reinventure. The bank in October struck a deal with buy now pay later major Afterpay to be the first partner on its new “bank-as-a-service” (BaaS) digital platform. At the time, Westpac chief Peter King acknowledged that fintech innovation was changing banking and the BaaS platform allowed the bank to combine its experience with partners’ innovation to drive new customer experiences.

“We actually think that the real debate around banks and technology today is no longer on open banking or open finance, but rather BaaS, i.e. how banks can embed their products into brands, in order to drive revenues for both the brand and the bank, or BaaP (with the bank trying to internalise services from other non-financial companies),” they write in new research.

While there is a risk of being disintermediated, the analysts point to the success some European banks have had embracing new regulatory frameworks and materially changing how they interact with customers to a way that’s similar to the likes of Amazon, Google and Netflix. This boosts engagement and they become the “platform of choice for customers' financial needs”.

EY concurs: “Not all banks want to, or can, develop a platform model, but as they seek to modernise their business and find ways to deliver more value to clients, it will be essential to either build one themselves or join someone else’s.”

COVID may be the challenge of the day, but technology appears set to remain the key battleground for banks in the future.