So what now? Beyond Biden vs Trump

In the months – in many cases years – leading up to the dramatic US election, central banks had been pleading politicians for more help from fiscal policy to get economies moving.

One, Sweden’s The Riksbank, even went as far to raise the idea of fiscal policy playing a more “explicit role” in attaining inflation targets, arguing they’re ultimately “society's target” given “political systems” support them.

“Fiscal policy needs to play a larger stabilising role than has been the case in recent decades. (It) may not merely provide support for monetary policy with regard to counteracting recessions, but also explicitly contribute to maintaining confidence in the inflation target,” the Riksbank’s first deputy governor said in a speech on October 7.

Then the US election came along and the focus on fiscal policy and “reflation” softened.

For markets, a lot came down to the Senate and trade-offs. Sure, the Republicans maintaining control of the Senate (albeit depending on two “runoff” seats in Georgia in early January) meant a supersized stimulus package was off the cards. But so were Biden’s plans to wind back some of Trump’s tax cuts and deregulation, with a more predictable and less confrontational White House a bonus.

As Westpac strategists Richard Franulovich and Sean Callow wrote this week, the Democrats’ “underwhelming performance in Congress mean that hopes for $US2 trillion plus in immediate COVID aid and a sustained medium term fiscal push built around Biden’s four year $US3-4 trillion Build Back Better plan need to be sharply scaled back”. “Fed officials have been imploring Washington for more fiscal relief, their projections assuming more fiscal support. That, and the expanding wave of new Covid-19 infections likely point to downward growth revisions,” they added.

If correct, that points to another three years of the Fed being very supportive of markets, a possibility embraced by investors around the world – the Australian stockmarket popped 3.4 per cent this week following positive news about Pfizer’s COVID-19 vaccine and the US election.

"The surging virus in the US/Europe plus the lack of an immediate US fiscal response will create erratic market moves over the next two to three months. But over the next 12 months, vaccine progress should prove the more dominant narrative," JPMorgan's strategists said in a note today, adding that above-trend global growth and "ultra-loose monetary policy" were adding to the bullish sentiment sweeping markets.

Three years of an accommodative Fed would also align with what’s expected in Australia.

In fact, the Reserve Bank of Australia has committed to it. Unveiling a fresh cut in the cash rate to just 0.1 per cent and $100bn of QE, Governor Philip Lowe this month pledged “the board is not expecting to increase the cash rate for at least three years” and inflation needed to actually rise to within 2-3 per cent for some time before any rate hikes, as opposed to just forecasting inflation to hit the target. 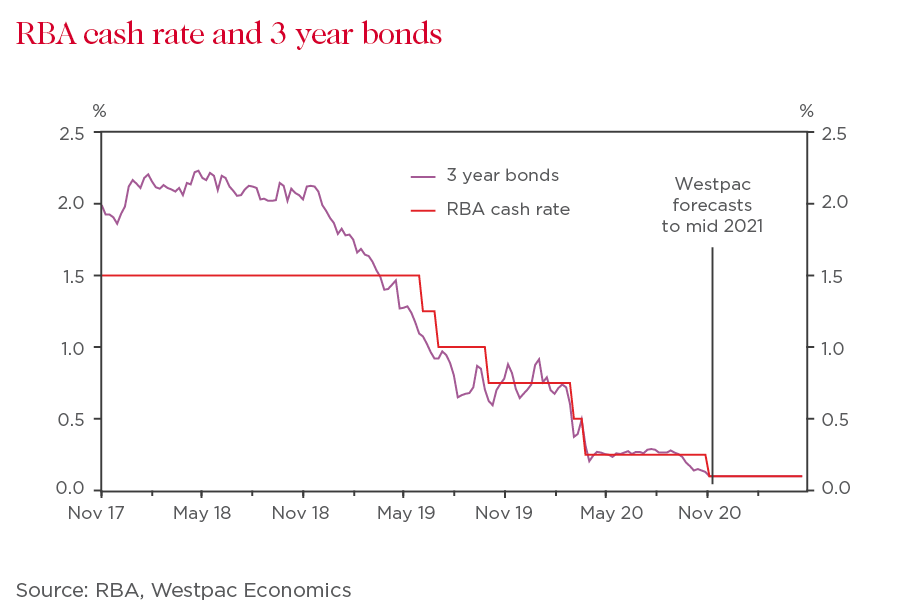 To be fair, those comments were made prior to Pfizer and BioNTech’s revelation that trials showed its COVID-19 vaccine was more than 90 per cent effective.

Still, the RBA is far from alone in tweaking their play book to ensure people have confidence that rates will remain low for a very long time. The Fed, the world’s most powerful central bank, in August unveiled a “robust updating” of policy whereby it shifted to “average inflation targeting”. In other words, inflation will be allowed to run above the Fed’s 2 per cent goal “for some time” after periods of running below that level.

Not long after, the RBA also tweaked its approach to inflation targeting after years of struggling to hit its target of 2-3 per cent “on average over time”.

“For inflation to be sustainably within the target range, wage growth will have to be materially higher than it is currently. This will require a lower rate of unemployment and a return to a tight labour market. On the current outlook, it will take some years to get there.”

For many people, the obvious question is why does inflation matter? Rising prices isn’t something desired by many consumers and the standard monetary policy tool to control inflation – moving interest rates – aren’t applauded either when they're increased, nor always fully appreciated when they are reduced.

“Households are likely to observe the direct and immediate effects of looser policy, such as higher asset prices and lower deposit rates. But it is harder for them to recognise, or attribute to monetary policy, the indirect benefits such as the boost to job prospects or the reduction in the chances of financial distress,” the Bank of England said in a recent paper “Has monetary policy made you happier?”.

So where to from here?

In a world of lofty debt levels only exacerbated by the pandemic, central banks definitely don't want deflation and are set to keep striving for inflation. Sweden’s central bank argues that having some inflation means central banks are more likely to be able to use interest rates when choosing which monetary policy tools to use to support and stimulate economies when hard times strike.

But with interest rates seemingly stuck at zero – or in many parts of the world negative levels – for the foreseeable future, many economists, academics and observers believe we’ve entered a world where fiscal policy and governments play a far bigger role than most of the people are used to.

For their part, central banks are assuring they’re there to support higher government spending by buying their bonds. Since February, the Fed’s balance sheet has increased from around $US4.2 trillion to $US7.2 trillion as it buys treasury bonds and mortgage backed securities to keep rates low. In Australia, the RBA’s $100bn QE program also includes buying state government bonds alongside the Commonwealth’s, the Governor seemingly backing up his recent calls for the states to spend more with a firm commitment. 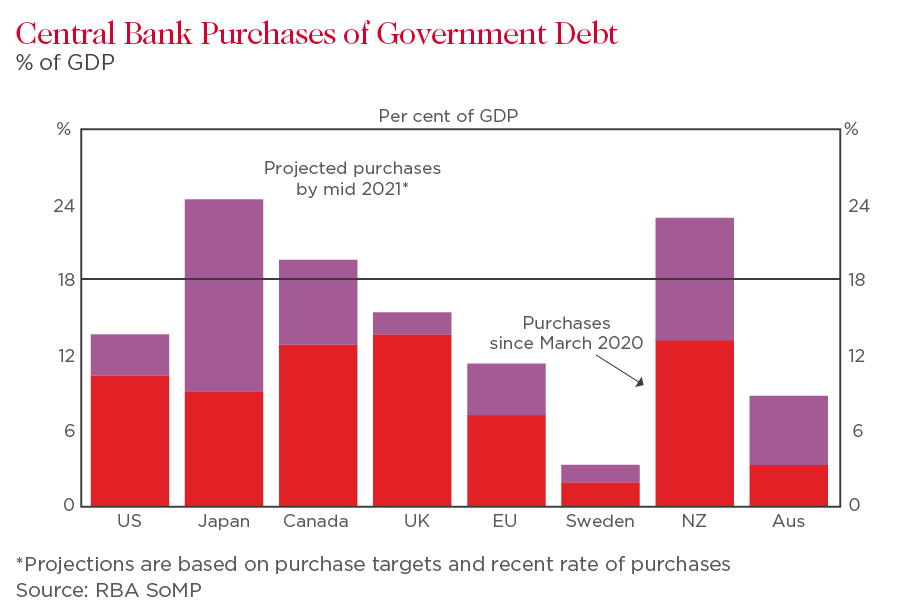 So far, central banks are buying government bonds in the secondary market, defying believers in “modern monetary theory” – the idea that nations which control their currency can be directly financed by the central bank and are thus not constrained by debt and deficits so long as there is spare capacity in the economy and inflation isn’t a worry.

In the longer term, however, talk of some sort of fusion of fiscal and monetary policy remains, vaccine or not.

“Central banks’ main challenge is that the transmission of monetary easing to the economy via financial markets is impaired,” Citi’s economists wrote this week. “Previous targeted monetary policy tools have not had strong economic impact. The most likely solution to affecting demand remains fiscal-monetary policy coordination.”

In a world permanently changed by COVID-19, it's anyone's guess when that may be.