Why everyone’s talking about ‘zombies’

When insolvency specialists keep reminding you a lot of companies are on the brink, it’s no surprise the federal government opted for what some described as a “business budget”.

Amongst the reams of budget analysis, McGrathNicol partner Jonathan Henry described the investment allowances and such in the budget as “effective stimulus”, but ones that are likely to have an “uneven” impact on the corporate sector. On the one hand, businesses with solid balance sheets and “well-supported” financial forecasts will “gain access to capital and take advantage of the ‘cash kick’ and drive growth”.

But for others, he says COVID-19 has simply accelerated the “structural headwinds” many industries were already facing, such as the shift to online channels.

Put another way, tax perks can’t save every business whose revenue and cash reserves have fallen away sharply, particularly once the government’s major rescue programs such as the JobKeeper wage subsidy scheme end in March.

“Many businesses that would ordinarily have required external intervention are being propped up by the government support measures, and remain likely to fail once those measures come to an end,” Henry wrote.

He’s describing the undead of the corporate world – the much-discussed “zombie” companies that keep paying their bills and debts but cannot get out of debt. McGrathNicol claim external administration appointments dived around 60 per cent from March to August. As such, insolvency specialists have ironically been finding life particularly hard of late, many being on JobKeeper themselves, according to a recent survey from the Australian Restructuring Insolvency and Turnaround Association, which also noted many members were seeing an increase in zombies. 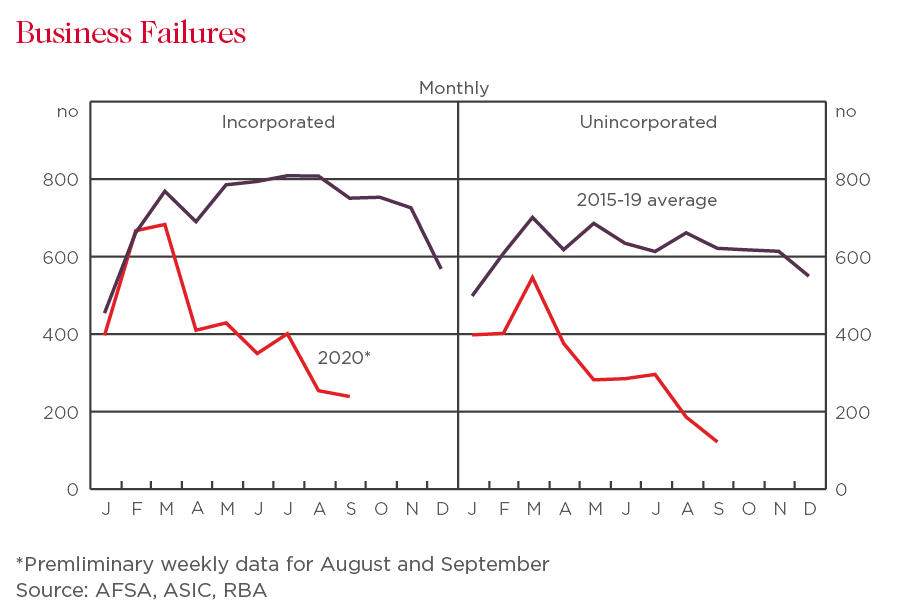 But a recent report from the Bank for International Settlements – often referred to as the “central bank for central banks” – found zombification was alive and well way before COVID-19, no doubt assisted by the gradual decline of interest rates in the past few decades. Globally, zombies – defined as businesses that are “unprofitable but remain in the market rather than exiting through takeover or bankruptcy” – were found to have risen from 4 per cent of all stockmarket companies in the late 1980s to 15 per cent in 2017.

In Australia, the share was even higher at around 30 per cent, a statistic the BIS said partly reflected the “relatively greater importance” of commodities in the market. In other words, the mining sector has seen a few zombies over the years.

Globally, other industries particularly prone to have lots of zombies were healthcare – albeit which “might change in the wake of the Covid-19 shock” – and printing and publishing.

“Compared with other firms, zombie companies are smaller, less productive, and grow less in terms of assets and employment, while spending less on physical and intangible capital,” the BIS says, adding that its estimates likely understate the number of zombies given its research only focused on listed companies. They added a key issue with zombies is that they are “less productive and dynamic than other firms”.

It’s near impossible to know how many zombies Australia has in 2020. But what is clear is that many businesses have been successfully kept alive with the help of JobKeeper, the banks’ loan repayment deferrals and the safe harbour protections for directors for trading while insolvent (which were also recently extended). In addition, the government also recently extended the temporary continuous disclosure provisions for companies and their officers, and reformed the insolvency framework, including a new debt restructuring process for incorporated businesses with liabilities of less than $1 million.

In total, King & Wood Mallesons recently claimed there have been more than 80 regulatory relief measures brought in by the federal government during COVID-19 and that they have been “extremely effective at enabling businesses to go into hibernation during the various lockdowns”. On Friday, the Reserve Bank estimated support policies have reduced the number of business failures – typically between 15,000 and 20,000 firms a year – by around 4600 firms “so far”.

“Assuming that JobKeeper and other policy stimulus is tapered in line with current announcements, a further 6600 firms are estimated to be saved in 2020-21, relative to no policy response,” the RBA said. “These differences are most pronounced in the accommodation and food services, arts and recreation services, and other services industries.”

So, how many of these firms avoid zombification, or even worse, failure?

It's clearly too early to tell, with results from the big banks in coming weeks – including Westpac on November 2 – to provide additional colour on how customers are travelling.

What we do know is that while few businesses have faced a downturn as severe as the COVID-19 recession, the government is providing record amounts of stimulus and support, banks have repeatedly expressed commitments to work with customers and economists have been upgrading their forecasts for the economy. Treasury also factored a vaccine next year into its assumptions in the budget.

In the BIS’s study, 25 per cent of zombies ended up closing their doors over the 35-year period, but some 60 per cent “exited from zombie status”. That good news was somewhat offset by the added comment that firms that do recover from zombification “remain weak and a drag on economic dynamics”.

Asked about zombies last week, Treasurer Josh Frydenberg said: “We're hoping that many of them will continue to survive, but not every business will. That is the harsh reality of the crisis we face.”

As the BIS suggested, in a pandemic authorities face few perfect choices, only less bad ones: “The delicate task is to seek to shore up companies that would be viable in less extreme circumstances while at the same time not excessively dampening corporate dynamism by protecting already weak and unproductive ones.”