Bold budget, tick. But still more to do

After only last year getting to within a whisker of a surplus, it is now staring into stunning deficit and debt profiles as restrictions to contain the pandemic cast a long shadow over the economy.

Even by 2023-24, when Treasury expects the deficit to have improved to $66.9 billion, the budget deficit would still be weaker in dollar terms than at the peak of the Global Financial Crisis.

But the government is rightly playing its role in supporting household incomes, incentivising business investment and boosting infrastructure during this once in a century shock. At 11 per cent of GDP, the 2020-21 deficit of $214bn is around the same proportion of GDP as most other developed nations. And as the Treasurer  noted, net debt as a share of the economy is expected to peak at $966bn, or 43.8 per cent of GDP – half the UK, around a third of the US and around a quarter of Japan.

Importantly, interest payments on that debt as a proportion of GDP are actually expected to fall due to record low long-term bond rates. Financial markets are telling governments around the world they can run up debt to previously unthinkable levels in order to fill the hole created by the pandemic, due to a chronically weak outlook for growth and inflation for the foreseeable future.

Positively, the central theme of Budget 2020 was job creation, aiming to boost demand and business investment while moving away from the blanket temporary income supports such as JobKeeper to more targeted policies aimed specifically at encouraging new hiring. 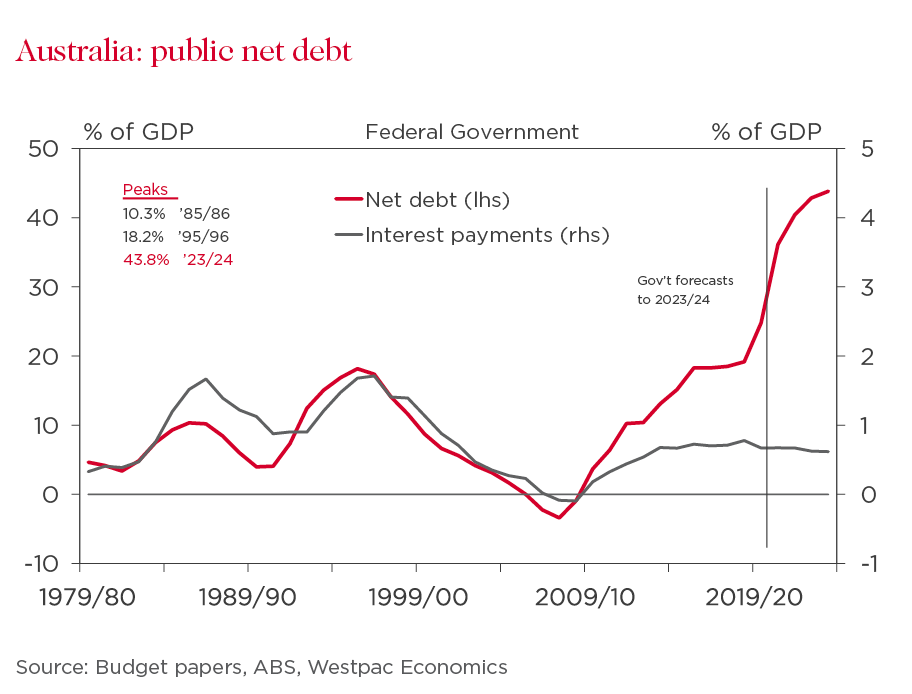 As Westpac foreshadowed in its budget preview, the government brought forward Stage 2 of its personal income tax plan by two years by applying it retrospectively from July 2020. In a minor surprise, Stage 3 of the tax plan wasn’t also brought forward  to July 2022 - a move the budget could have  afforded ( an annual cost of around $15 billion out to 2023/24) and which would have further boosted incomes and demand.

Still, bringing forward Stage 2 and extending the Low and Middle Income Tax Offset (LMITO) for those earning up to $90,000 will boost incomes by $17.8bn over two years.

The real surprise was the sheer size of the government’s initiative to kickstart business investment.

The headline measure – the temporary instant asset write-offs for businesses with turnover up to $5bn – is estimated to encompass around 99 per cent of businesses covering $200bn of eligible investment up until June 2022. That is estimated to cost a staggering $31bn over the three years to 2023-24.

In addition, the temporary loss carry-backs against profits made since 2018/19 is expected to deliver around $3.1bn in rebates to business over the coming two years. Combined, these policies are estimated to create 40,000 jobs.

The reinstatement of R&D tax offsets, the JobMaker hiring credit to help younger workers and the JobTrainer measures are smaller in dollar terms but sensible policies as part of the government’s clear shift to job creation rather than subsidising existing employees.

However, the current timetable for the expiry of JobKeeper in March next year may be problematic. Despite the expected reopening of the economy there will still be many businesses that will continue to be impacted by foreign border closures and voluntary social distancing. There will be good arguments for extending the JobKeeper model for such businesses.

Failing to make permanent the reduced JobSeeker unemployment supplement of $250 is a surprise. This would cost around $15bn a year and, unlike most of the policies in the budget, would not have a “sunset clause”. As we move closer to the end of the year it is likely that the government will have to address this issue and the associated implications for the fiscal outlook. 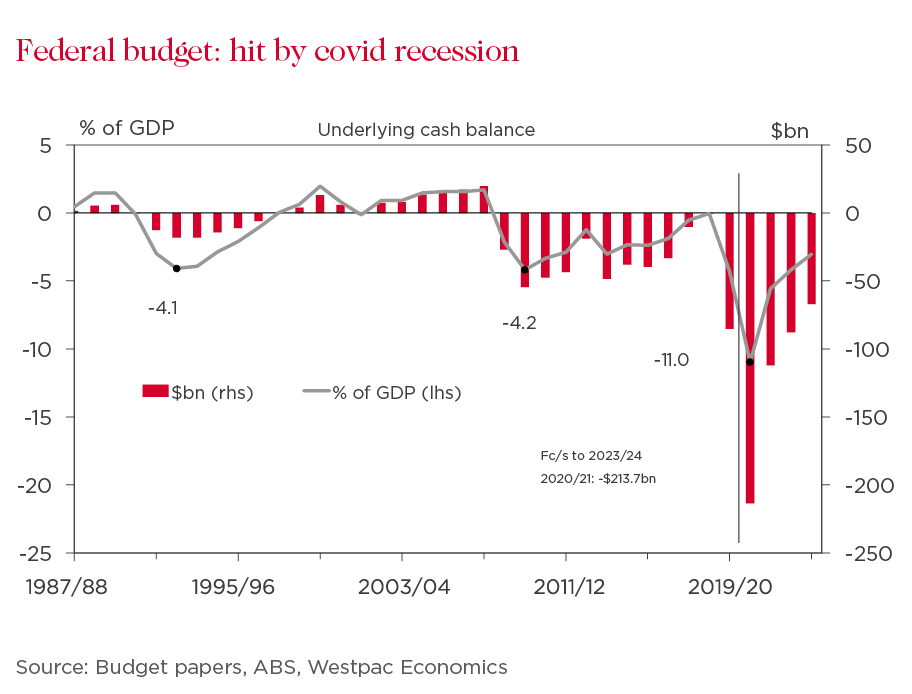 Additional infrastructure spending, at $5.7bn for new and accelerated projects over four years, was much lower than we had expected, although the emphasis on enabling infrastructure which will engage the private sector is welcomed.

While there was no extension of the successful Homebuilder package housing, including the support in the budget for affordable homes, will still need to play a central role in lifting growth. The Reserve Bank has a key role to play here by further lowering interest rates – particularly fixed rates – to support demand in a sector that has historically been vital to Australia’s economic recoveries.

We expect the Bank to respond with further easing next month by cutting both the cash rate and the three-year bond target to 0.1 per cent. Speculation around this move has already seen the three-year bond rate drop from 0.25 per cent to 0.18 per cent, further lowering some borrowing rates.

As in all budgets, but with this one in particular, there are significant risks to the economic and fiscal forecasts.

The rebound in real GDP to 4.75 per cent growth in 2021-22 from the COVID-driven recession – followed by increases of 2.75 per cent and 3 per cent in the years after – are vulnerable to not only the failure for a vaccine to emerge, but fragilities in the economy pre-COVID (weak wages growth) and legacies from the recession.

Specifically, the immediate risk to the forecast is the estimate that non-mining business investment will surge by 7.5 per cent in 2021-22 in response to the generous instant write off policy. Businesses will only invest if they are confident that the resultant increased capacity ban be used. An air of confidence in the economy overall will be an important condition for businesses to respond.

With the unemployment rate only forecast to fall slowly and remain well above 6 per cent, that confidence factor has to be under question. 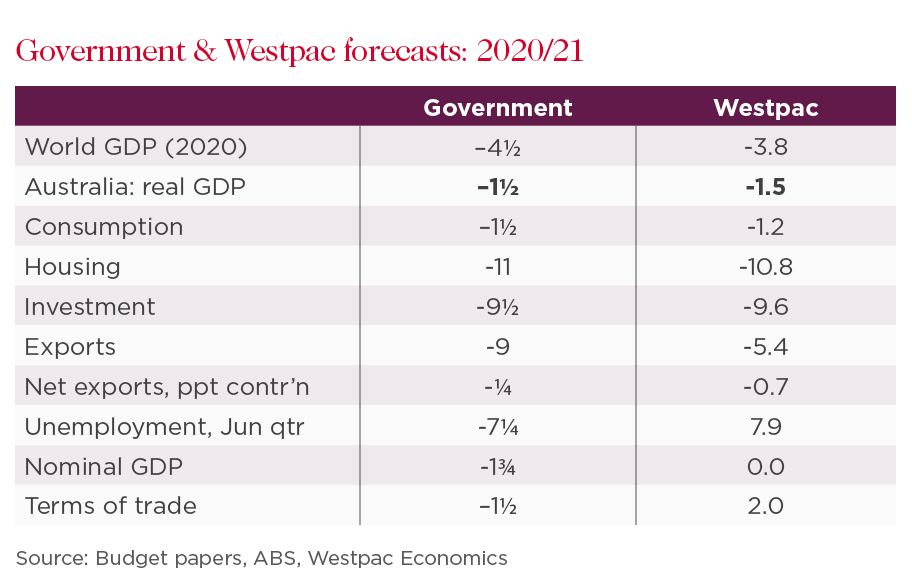 For the fiscal parameters, the historical risk is that expenditures tend to surprise to the upside, while revenues surprise to the downside following a severe recession.

Our current forecasts still have the economy 1 per cent below end-2019 level by 2021 and the unemployment rate remaining around 7 per cent in 2022, well above full employment.

These numbers are too high, but we take some comfort that the government’s forecasts of a 10 per cent peak in the unemployment rate in 2020 have been significantly revised down. The key, however, is that despite a much more realistic “starting point” and a bold growth forecast, the government is still unable to envisage the unemployment rate below 6 per cent before 2023-24.

Despite this promising start highlighted by the bold decisions around personal tax cuts and investment allowances, it is highly likely that there is much more work to be done before we can clearly see that path towards full employment.