Why we're cutting back consumption

It’s a bit of a cliché, but some pictures really do tell a thousand words when it comes to consumer behaviour and how it’s affecting the economy.

In late October, well before this week’s lacklustre national accounts and retail sales numbers, Westpac’s economics team published a slew of additional graphs for their “Red Book”, a quarterly in-depth probe into the state of consumers.

As the one below shows, people’s actual behaviour – opposed to surveys of beliefs or intentions – compared to the lead up to the global financial crisis highlights the dramatic shift in risk appetite that has occurred. Margin loans – where people borrow to invest in shares – and credit cards are out, stashing money in deposits is in. 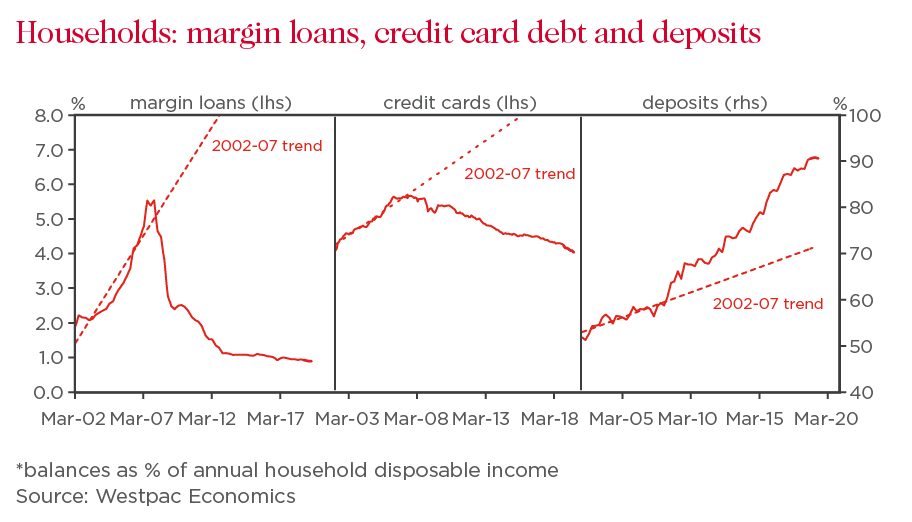 Consumers’ “unsettled” state, as the Red Book put it, was emphasised in this week’s national accounts, which disappointed the market with GDP growth of 0.4 per cent in the September quarter, or 1.7 per cent for the past year. Absent strong exports (think iron ore and LNG), government spending and immigration, growth would have likely looked very different.

Looking closer revealed the crux of the problem.

Despite a surge in disposable income as the government’s low and middle income tax offset hit bank accounts, the savings ratio spiked to a more than two-year high of 4.8 per cent. Household consumption expanded only 0.1 per cent, the weakest quarter since the GFC, as consumers went on “strike”. In turn, private sector spending – measured as private demand, which includes business investment – continued to contract in a sign of recessionary conditions in that part of the economy, in stark contrast to booming public demand amid healthy government spending, supported by stronger tax revenues flowing in from higher commodity prices.

Clearly, consumers have opted to put personal tax offsets and the Reserve Bank’s three official rate cuts this towards saving and paying down debt. In fact, Citi estimated that the increase in the household savings ratio in dollar terms was $6.2 billion, “roughly around” the same value as the tax cuts. 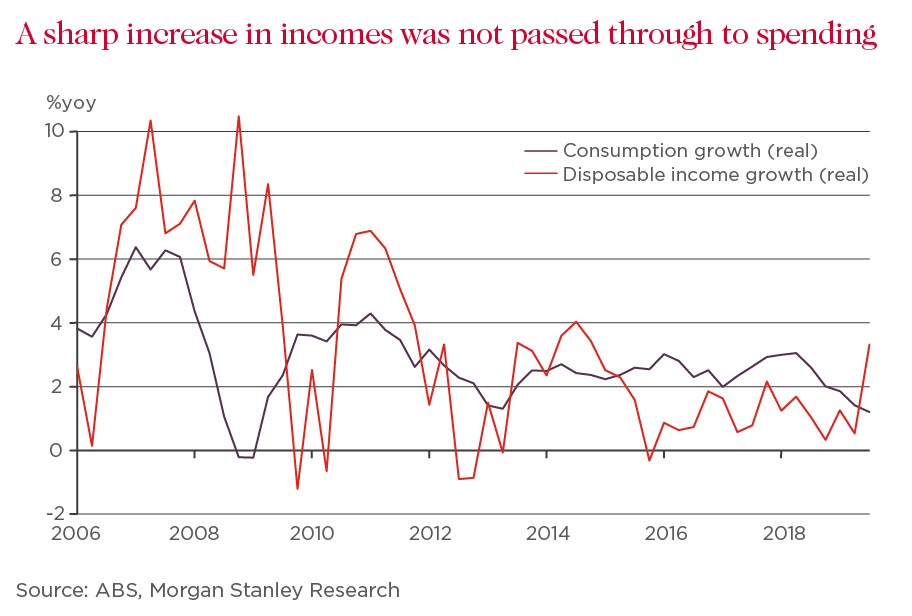 “Most of the quarterly gain in disposable incomes – around 80 per cent – was saved,” Westpac senior economist Matthew Hassan said. “Notably, the increase in saving quarter to quarter is larger than the decline in interest and tax payments suggesting consumers have also been saving more of their regular income. This points to heightened risk aversion in the period.”

So, why does this all matter?

For most economies, what consumers do is a big deal, particularly at the moment.

As the RBA has repeatedly called out, weak consumption is dragging on the economy and remains “the main domestic uncertainty” as ongoing weak wages growth and high household debt spur consumers to cut back spending. 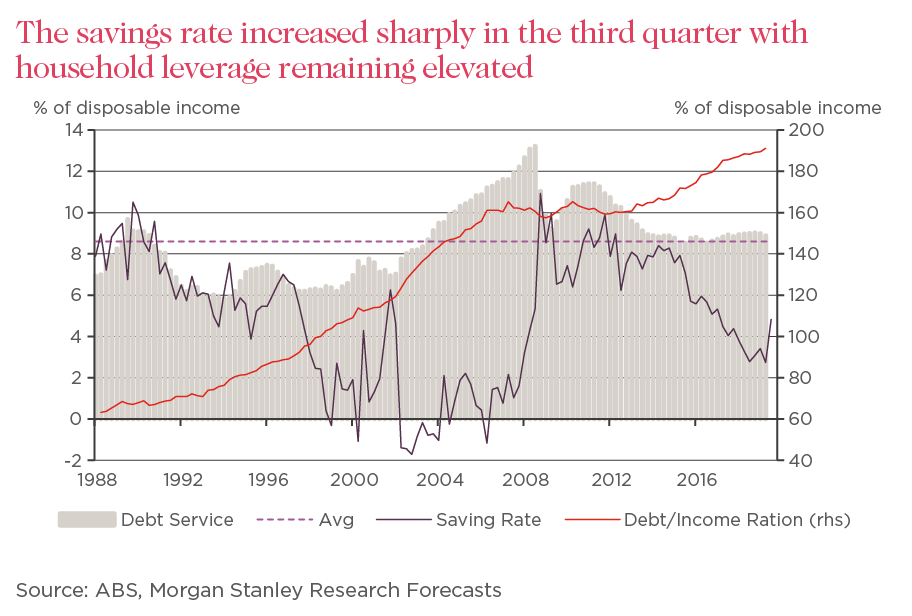 For the government, the ensuing sluggish economy – GDP growth of 1.7 per cent compares to the nation’s “trend” of 2.75 per cent – is prompting calls for further stimulus as monetary policy runs out of puff at a cash rate of just 0.75 per cent. That’s a touch awkward when the government remains committed to delivering a budget surplus, despite some economists, including Westpac’s Bill Evans, floating ways to do both: stimulus and surplus.

“The clear message from these accounts is that the government will need to review future policy options,” said Mr Evans, the bank’s chief economist, ahead of this month’s Mid-Year Economic and Fiscal Outlook update of the budget. 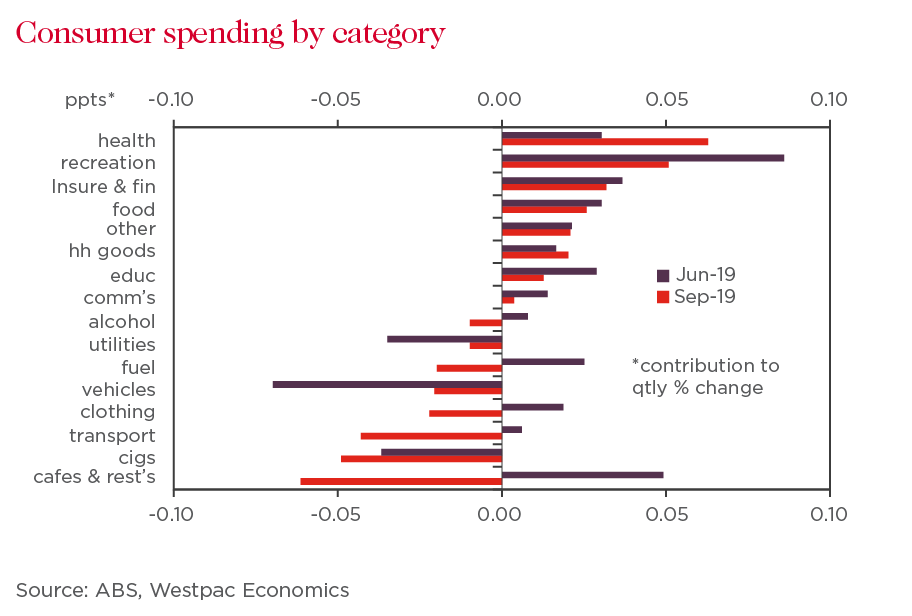 Looking ahead, calls for further stimulus are unlikely to die down.

According to The Federal Chamber of Automotive Industries, new car sales dived almost 10 per cent in November on the prior corresponding period, with all states and territories declining. Meanwhile, retail sales held flat in October, cementing the feeling that consumers’ third quarter “spending strike” carried into the lead up to the key Christmas trading period.

“While November may have seen some improvement, with early reports suggesting 'Black Friday' sales have been well-attended, the signs are still decidedly mixed, weak vehicle sales suggesting consumers are still in 'lock down' mode with discretionary spending,” Mr Hassan said.

The unknown swing factor may yet again be the housing market.

National house prices surged 1.7 per cent in November, the largest monthly gain since 2003, as Sydney shot up 2.7 per cent with Melbourne not far behind, researcher CoreLogic revealed this week. Even Perth, in the doldrums for five-odd years, saw some relief as prices rose. That’s all good news for owners, less so for aspiring buyers and arguably unnerving for policymakers.

If consumers continue to save or pay debt rather than open their wallets wider, the theory that rising house prices inspires spending via the “wealth effect” will be tested – and the idea that heavily indebted households simply can’t spend much more take hold.

For its part, the RBA on Tuesday – a day before the national accounts – reiterated that the economy “appears to have reached a gentle turning point” and growth would gradually pick up to around 3 per cent in 2021. It highlighted the many positives, such as low interest rates, tax cuts, infrastructure spending, the turnaround in house prices and better prospects for the resources sector.

But a few days on, the view may be somewhat different.

“The Q3 GDP data would be disappointing for the RBA,” said Citi economist Josh Williamson, who like Westpac’s Mr Evans has pencilled in a further cash rate cut in February when the Bank returns from its Xmas break. “If the RBA had known these numbers … the December policy statement would have been more dovish.”