Under the hammer: housing’s spring test

Long locked out of the property market because of escalating prices, they now sniff an opportunity in the cooler market.

“I’ve been looking to buy a property on and off for around three years,” says the 36-year-old IT consultant. “It was an awful experience when the market was booming, as everything was selling at auction and going for $100,000-plus over the estimated price range.”

However, he now faces a “double edged sword” scenario. Prices in Sydney – and southern rival Melbourne – have stabilised, yet there’s less to choose from.

“The market has cooled and prices have dropped (but) there really aren’t many properties being listed,” he says.

“At the very least now, I’m much more optimistic that I could actually purchase a property within my budget, should I be able to find one.”

Jessie’s guarded confidence – and many other hitherto frustrated home seekers – will be tested in the upcoming spring selling fiesta, which is being watched even more closely than normal this year as a key update on market sentiment and whether the two-year housing downturn is over. Buyers and vendors alike certainly have an added spring in their step since the Coalition’s federal election win, which removed the spectre of a Labor government cracking down on negative gearing and capital gains tax rules. The shock poll was closely followed by the Reserve Bank of Australia’s decision to cut interest rates in two successive months and the banking regulator’s easing of a key loan serviceability buffer, enhancing the affordability sums for buyers.

But expert opinion varies on whether prices have truly bottomed or if they will wilt further as previously reluctant vendors test the market and find muted demand among cautious consumers.

Celebrity Sydney realtor John McGrath says the fillip in on-the-ground sentiment was felt immediately after the May 18 poll.

“The following Saturday inspection numbers jumped from an average of five to ten lukewarm buyers to 20 to 30 determined buyers,” says the founder and executive director of McGrath Real Estate Agents. “In fact, one property in Newtown (in inner Sydney) that had been low on numbers prior to the election had over 80 groups converge on it.”

Nationally, the trends are still patchy.

In July, prices in Sydney, Melbourne and Brisbane all rose by 0.2 per cent, but Perth and Adelaide prices declined by 0.5 per cent and 0.3 per cent respectively. Hobart, an outperformer in recent times, ticked up 0.3 per cent, holding its position as the leading capital in terms of annual gains.

“Overall, while there are still pockets of price weakness, most markets are (experiencing) a clear stabilisation,” says Westpac senior economist Matt Hassan. “The main caveat is still around extremely low levels of turnover. Prices will face a key test as turnover lifts heading into the spring selling season.”

Buyers’ agent Jarrod McCabe of Wakelin Advisory says: “There’s certainly fresh optimism at the moment, especially compared to what the Sydney and Melbourne markets have experienced over the last 18 months.”

“You can be optimistic in this market but it really hasn’t been tested yet. You have to be cautious about a great turnaround.”

National Property Buyers director Antony Bucello concurs that the renewed enthusiasm is being tested in a sparse market but believes the downside appears limited. In its latest update, Sydney inner city-focused agency BresicWhitney this week added that tight supply was also working in the favour of some “budding spring sellers” as “buyers respond to that”, pointing to a new suburb record in trendy Annandale.

“If buyers are not looking then they should be,” says Bucello. “My view is we have bottomed out. We have reached the level where it’s only going to improve from here.” 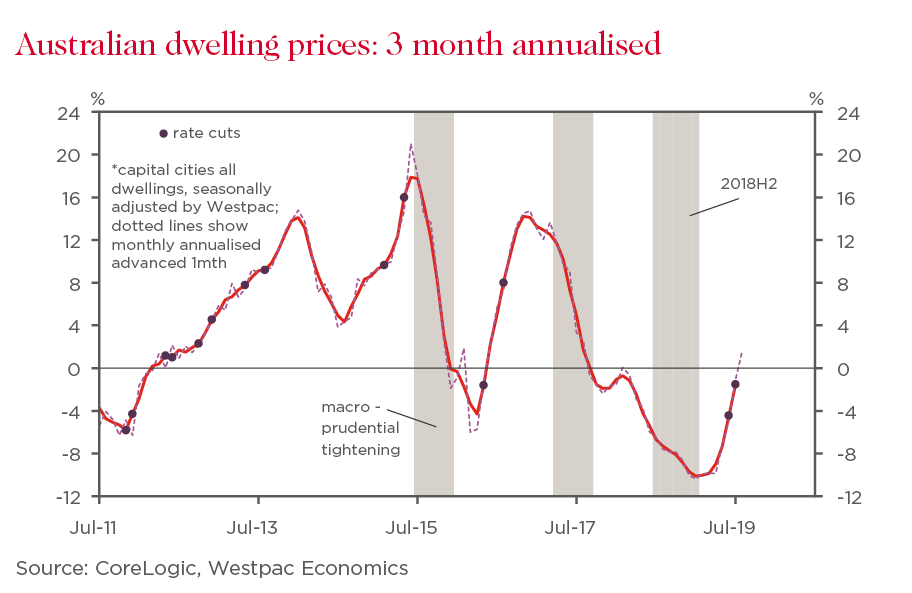 Leading into spring, auction clearance rates – a closely watched indicator – have been encouraging but, once again, it’s based on a limited sample. Bucello notes that 10,000 auctions took place nationally in the first half to June, compared with 16,000 during the same period last year.

“Vendors have decided to sit on their hands and wait for the market to recover, rather than list their properties,” he says.

According to CoreLogic, the national clearance rate of 68.3 per cent over the first weekend in August compares with 54 per cent at the same time last year. McCabe says the improved clearance rate reflects the lack of supply, but he expects the rate to taper back to the mid to high 50s in the heart of Spring, compared with the mid 70s at the height of the boom three years ago.

Across the housing sector, other forward-looking indicators paint a cautionary picture.

As almost any retailer would attest to, broader consumer confidence is also weak: the latest Westpac-Melbourne Consumer Sentiment Index shows a “troubling” 4 per cent slump in recent months to a two-year low, despite elevated housing market optimism on the back of the stimulus measures.

The one upside to buyers is that the RBA is unlikely to increase rates in a hurry: the consensus message from economists is the central bank is likely to reduce the official cash rate – currently at a rock-bottom 1 per cent – even further.

One of the most seasoned RBA watchers in the game, Westpac chief economist Bill Evans tips the central bank will further reduce rates 25 basis points in October and then again in February next year.

For policymakers, arguably the positive and negative influences on the housing sector will create Goldilocks conditions: vendors are motivated to sell, with aspiring buyers like Jessie bolstered by the enhanced affordability from low rates and house prices no longer red hot.

“What was a sellers’ market until late 2017 and subsequently a buyers’ market for the ensuing two years has now levelled out to a marketplace that both should enjoy,” McGrath says.

We’ll know for sure when the gavel falls on the most anticipated auction season for some years.