It can be easy to forget it’s been only five years since the tech start-up ecosystem in Australia began to really get organised.

Yes, local tech successes had been founded in the prior couple of decades. But the Silicon Valley-style coordination between Australian founders, funders, advisors and co-working hubs is a relatively new phenomenon.

The result has been an uptick in locally founded, technology enabled businesses that are transforming all traditional industries and, with that, the business landscape and lives of most Australians. What’s emerging is the possibility of a clean and connected future, as different parts of our society and economy get increasingly linked through digitisation and powered by more renewable energy sources and sustainable business practices.

Although this start-up scene has been slower to evolve – and remains a minnow – relative to tech hubs in the US, Israel and Europe, its importance to Australia’s future prosperity is increasingly undeniable.

But a handbrake for this scene has been an operating landscape that has struggled to keep pace, largely because the new breed of businesses driving the change are quite different from traditional small and medium sized businesses.

As outlined in a Smart Industries 2030 report released today by Westpac, some of the challenges faced are quite technical in nature – for example, they’re often applying technology in a way that hasn’t been done before, making it difficult to find employees with the right skills or experience. Others are regulatory – while government policies have evolved, there is room for more support.

But one of the biggest remains how these businesses get funded, particularly as they scale.

Just like the US, venture capital has started to play a big role in funding emerging businesses in Australia, with almost 70 registered VCs, including the likes of SquarePeg, Airtree, Blackbird Ventures and the Westpac-backed Reinventure. Venture capital raisings in Australia have continued to grow at pace, exceeding $1.32 billion in the 2017 financial year, more than double the $568m funds raised the year before, according to The Australian Private Equity and Venture Capital Association 2017 Yearbook. While this trajectory is positive, the VC sector remains too small for the growing market – especially in context of the $US84 billion raised by VCs in the US in the same timeframe.

When it comes to debt funding, the story is different.

Unlike the US where start-ups can access a host of financial lending instruments that have evolved as the market has matured since the 1980s through major players like Silicon Valley Bank, Australia’s major banks – including Westpac – have traditionally been wary of providing debt funding to early stage companies.

The due diligence needed for debt financing is different to equity investments and emerging businesses don’t fit into the usual lending metrics. By their nature, start-ups – even as they scale quickly – don’t have a lengthy track record of profitability and are more likely to be paying attention to revenue and customer growth rather than profit, which often causes friction with traditional bank lending approaches.

Indeed, the top source of funds is personal cash, followed by private equity and family and friends. Bank loans sit outside the top eight sources of funding, according to last year Start-up Muster report. 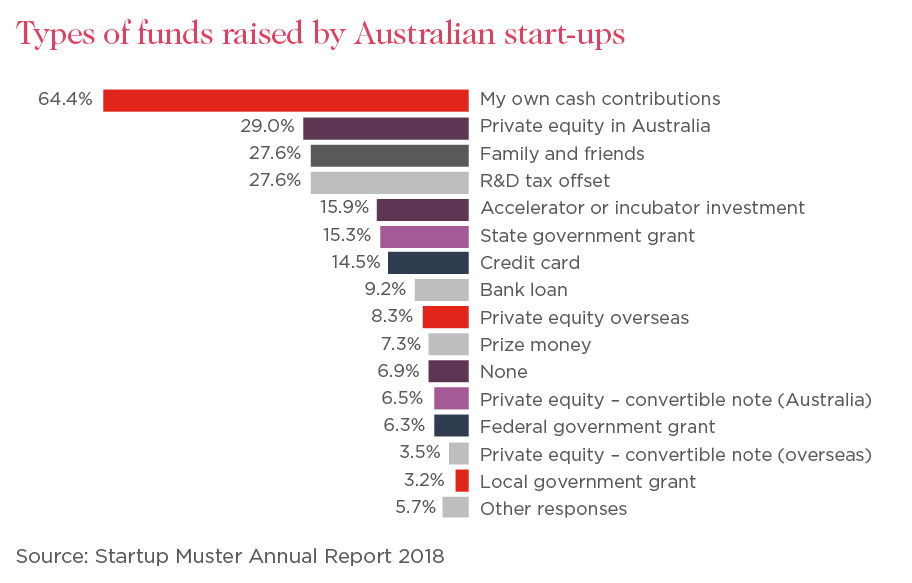 But, as the domestic tech startup ecosystem matures, Westpac has recognised its approach must change if we’re to help these businesses, who we believe are very important for our future economy, to realise their potential.

A little over two years ago we created a new role in our Business Bank, focused on “Emerging Industries”, with a long-term mandate to work closely with founders, funders and advisors to answer three critical questions: What are the emerging industries? What types of businesses will be driving their growth? What do we have to do differently to support their growth?

It became obvious very quickly that the Australian economy was going through a transition, driven by the allure to digitise and the necessity to decarbonise. This would only accelerate with advances in technology, changing social attitudes and, in the future, the right policy settings.

Change requires investment and investment spurs growth – and the businesses that would capitalise on this next wave of growth would be those which apply these technologies to solve age-old problems in new and innovative ways and, critically, be able to scale the resulting product and services. If history is anything to go by, these businesses were more likely to be the new tech start-ups, and the ones that need the most help to execute on their grand vision.

We needed to support these businesses, especially at the critical stage when they are scaling up, by unlocking access to specialist banking services, like payments, international trade and foreign exchange, and critically, addressing the gap around funding.

To do this, we’ve setup a network of specialist bankers dedicated to emerging industries, and a risk appetite to provide debt funding to scale-up businesses and have spent the last 18 months working closely with founders to test and learn how debt can be applied in new/emerging business models. It comes down to developing a deep understanding of a business, including their technologies, strategies and growth plans, and the risks involved, and applying debt in a measured way to complement the business’s equity to extend its operating runway, while also ensuring it has the capacity to service the debt.

While it’s still early days and hurdles remain around getting good sets of financial statements to understand and forecast cashflows, the new approach has successfully been applied to emerging businesses across a number of industries, business models and maturities.

It’s an exciting development for emerging businesses, albeit just one of many steps needed across all participants in the system – from the public market, venture capital market, angel investors, policymakers and the banking debt market – to get more finance flowing to support emerging businesses to meet their potential and strengthen Australia’s future prosperity.

Reeta heads up Westpac’s specialist Emerging Industries team, which serves new and growing technology business customers. Reeta brings to her role more than 10 years’ experience in strategy positions held both within Westpac Group since 2010 and previously in management consulting engagements, during which time she’s worked closely with entrepreneurs, innovators and companies at the forefront of technological advances changing the way people live and businesses operate.