If there’s one thing I’ve learnt during three decades working on technology solutions for customers, it’s that for new innovations to change markets, customers – and the ecosystems – need to be ready.

The global market for these artificially intelligent virtual assistants – which you can ask to switch on the lights, turn up the heater or order a pizza – grew 210 per cent in the past year, according to recent research by analytics firm Canalys. And around 56 million are expected to be shipped by year end.

This massive rise in popularity in less than four years shows that voice is set to become the new touch. I’ve even heard some commentators predict that voicebots will become so prevalent in all areas of our personal lives and business that it won’t be too long before we won’t need smartphones anymore.

We also got involved by launching “Westpac Skill” in January across Amazon’s Alexa and Echo Spot and the take-up has been good among customers who can ask simple questions about their bank accounts, with some starting to use it quite regularly. And from last week, customers with Google Assistant-enabled devices can do a similar thing.

But while the possibilities offered by voice technology are unlimited and exciting, it is still early days. 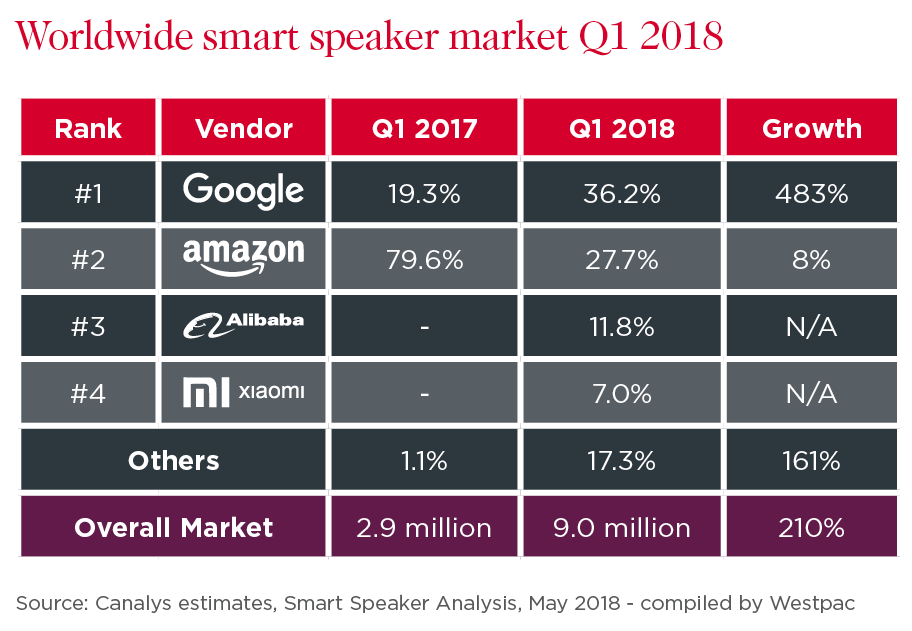 In my view, a few keys challenges lie ahead before we see it really start to gain widespread acceptance, particularly when it comes to banking. Indeed, these challenges existed when we first tried voice authentication a few years back which, while technically successful, struggled to gain customer acceptance.

At the top of the list is to build confidence in the security of voice technology.

This is by no means a new challenge for banks. Security has, rightly, reared its head with the entry of every major new banking tech innovation, as far back as the start of telephone banking, the birth of online banking in 1995, and mobile banking some 10 years ago. The security of these technologies is now accepted – as it will be with voice over time.

The key is a proven, robust voice authentication system, that’s easy to register, easy to use and is very secure – the audio equivalent of fingerprint or facial recognition to access mobile phones and mobile banking.  Also like these other now-trusted biometrics, ideally voice authentication will be managed by the platform builders such as Amazon, Apple and Google.

While there will be inevitable knocks to consumer confidence about security and privacy, such as the recent stir following claims of uninvited eavesdropping by smart speakers, device makers will be keen to prove – and constantly improve – the technology to build consumers’ trust.

The second challenge is to build people’s confidence in talking to machines.

The fact that there has been a 35-fold increase since 2008 in the number of Google searches commanded via voice, rather than keyboard, according to Moz, shows more people are getting more comfortable with it. This should only increase with further advances in conversational computing, a tech field recently named by The New York Times as one of five that will change the way we live.

There’s also a compounding challenge for banking in that not many people have imagined the possibilities offered by voice technology for managing finances.

While I don’t think there will ever be a time that customers will buy a smart device purely to help them with their banking, over time there’s no doubt they will be surprised by the assistance.

Looking ahead, not only will you be able ask your digital assistant to transfer money to pay a bill, but you’ll be able to talk to it and gain insight about your financial situation. Maybe it will tell you if you have too much of your money sitting in a non-interest paying account and ask you if you want to transfer it. Or let you know if your credit card is due or you haven’t paid a bill on time or when the interest rates change.

Of course, voice technology on its own is not going to be sufficient. Customers will want to be able to hear an answer and see a visual at the same time. So if you ask about your financial situation, as well as offering insights about your accounts, they will also appear on a video screen.

It’s this combination of voice, video and customer insights that make the possibilities unlimited.

Voice recognition technology is a sure bet. It just might take a little more time to truly take off.

Since joining Westpac Group in 1986, Dhiren has held a number of senior technology roles, including as CIO of St.George Banking Group and Westpac Retail and Business Banking Group between 2008 and 2013. He has overseen the delivery of major transformation programs including the introduction of Westpac LIVE, and new channels and core systems. Dhiren is currently responsible for Westpac digital.