Sign of the times: new trial for deaf customers

No one in her family was deaf. In fact the only time she ever saw anyone sign was on children’s television shows, like Play School.

All that changed when she made a new friend at high school who was hearing, but her mother, father and sister were deaf.

“The first time I visited her house it was just such a foreign thing. I had no idea what anyone was saying and she’d have to explain everything to me,” recalls Hanlen, who learned to sign at TAFE after her friend joked she should so she wouldn’t have to interpret for her anymore.

Fast forward and Hanlen is a decade into her career as a qualified Australian Sign Language – or Auslan – interpreter and has one of the rarest jobs in her field: she’s permanently employed by a corporate, rather than the more common situation of freelance contracting. “My job is one in a million. It’s like hen’s teeth,” she says of her role at Westpac to interpret for deaf colleagues.

And her days are about to get a lot busier as her in-house interpreting skills are extended to customers as part of a trial planned from August in Westpac and St.George branches across Western Sydney, suburbs home to the highest proportion of people in NSW’s deaf community.

Westpac’s Auslan trial adds to a budding trend to improve services for people who are deaf or hard of hearing, according to Leonie Jackson, chief executive of the Deaf Society of NSW.

“It’s still scarce, but it's starting to pop up here and there, as businesses begin to see the benefits of creating a more inclusive environment,” she says through an Auslan interpreter, noting that while she’s not aware of any other big organisation with interpreters on staff, some – like Apple and Service NSW – offer “on demand” interpreters, usually dialling a contractor via Skype. Restaurant Rashay’s in Sydney’s Punchbowl is also breaking new ground, making it mandatory for all service staff to learn basic Auslan.

Around one in six Australians is affected by hearing loss and that number is projected to increase to one in four by 2050 driven primarily by the ageing of the population, according to a report by Access Economics. Among this group are an estimated 10,000 Auslan users, although Jackson believes the number is much higher as data has not yet been accurately captured through the Census. It’s a multi-layered issue as research also estimates tens of thousands of people are unemployed or underemployed due to hearing loss.

Jackson says there are many positive aspects for organisations to become more inclusive, citing how the news of welcoming businesses generally “spreads like wildfire” through the “close-knit” deaf community.

“All of a sudden, there’ll be a huge line up of customers,” she says, making the analogy that without access to Auslan interpreters, deaf people face the same situation as wheelchair users confronting a flight of stairs with no ramp or lift access.

“Going into any type of business – whether it’s the local shopping centre, a bank, restaurant – most deaf people have a high level of anxiety about communication. They have to work out a strategy and can feel vulnerable, especially when it relates to finances,” she says.

“For an interpreter to be able to unpack information about those high-stakes decisions in their first language – rather than English which is generally their second language – is so important.”

The great challenge, however, is the shortage of qualified Auslan interpreters to meet the steadily rising need.

While demand for interpreters started to swell around three decades ago when the introduction of disability discrimination legislation saw more deaf people accessing tertiary education and professional employment, it has taken off more recently with the roll out of the National Disability Insurance Scheme which enables deaf people to access government funding for interpreters for the first time.

Closing this gap is not easy or quick, says Jackson, the first deaf CEO of the Deaf Society in its 100 year history.

“While many skills in the disability sector can be acquired in months or even weeks, learning Auslan to fluency can take up to six or seven years,” she says, adding the NSW Deaf Society has 170 registered interpreters on its books – a number she would like to see increase.

Hanlen – who says she’s interpreted for everything from birthday parties and funerals through to a birthing room and on a kayak during a youth camp – reflects that it took her five years to achieve her qualification and that she’s the only one from her foundational Auslan class who went on to become an interpreter.

“Like any new language, Auslan is difficult to learn,” says Hanlen, who is five years into her role at Westpac. “But it has the added challenge of being multi-modal: not only do you need fluency in both languages, you need to transfer messages using hearing and speech at the same time as signs and gestures.”

She says the difficulty and expense of learning can make it challenging for the hearing members of a deaf person’s family.

This was true for Marilyn Challita, who was born deaf into a hearing family and says through an interpreter that although her mother and one of her three siblings can sign, her father had never managed to learn.

Challita, who has worked at Westpac for nine years since leaving North Rocks-based Thomas Pattison School for deaf students, says she wouldn't be able to do her job without an interpreter because she’d “miss out on too much” during training, learning new tasks and attending meetings. She says many of her deaf friends “have it much harder” than her, finding it difficult to get a job or finding an employer willing to invest in interpreters.

Lisa Jackson, a senior operations manager in RAMS, also chairs an internal employee action group for people with disability, which is spearheading Westpac’s trial to improve services for deaf customers. She has a keen interest in this trial as she lost a significant part of her hearing after being hit by a car when she was walking along a footpath.

She says the process to date has been “clunky and patchy”, noting that booking an interpreter through an external organisation could sometimes take weeks. As part of the pilot, which Jackson hopes will “open the door” to scale the program nationally, staff will go through deaf awareness training and learn basic Auslan.

They’ll initially communicate with customers by typing together on a computer and then call on Hanlen to interpret, using video conferencing if needed.

Hanlen believes it will make a “world of difference” to customers, saying the key frustration for many deaf people is when staff have a “bad attitude”.

“Generally it’s due to a lack of knowing what to do, feeling scared they’ll do the wrong thing, so they freeze up and do nothing, which is worse than trying and making a mistake,” she says, adding her advice is “not to panic” given it’s the minor adjustments that can make anyone’s day.

“I was with Marilyn when the lady behind the café counter realised she was deaf and when Marilyn had bought her lunch, the lady signed ‘thank you’. You should have seen the smile on Marilyn's face.  It was just the smallest thing. Deaf people often feel really appreciative when someone has welcomed them into their hearing world.”

You may also be interested in Good Pair: The deaf CEO and her student. 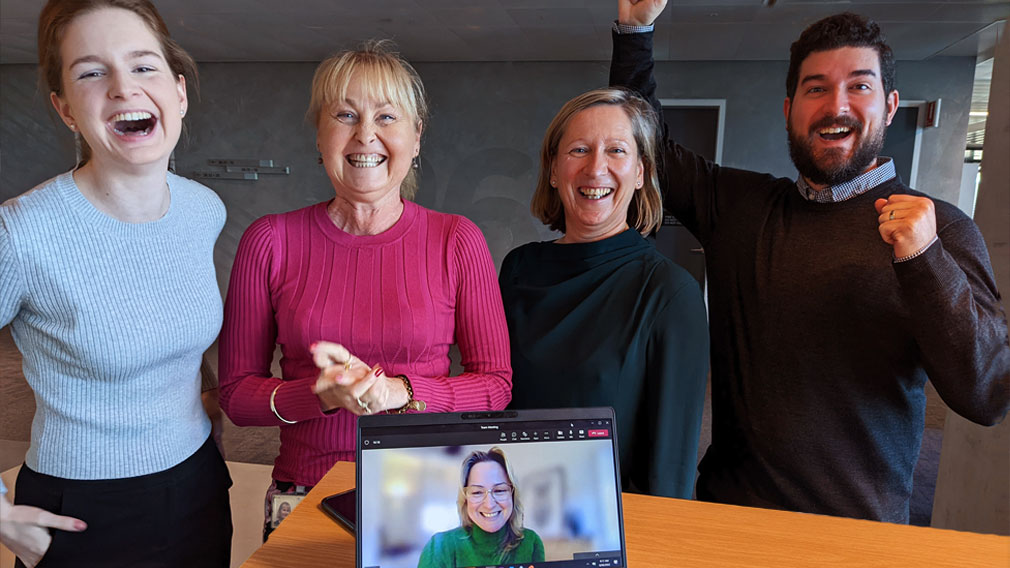