GOOD PAIR: The deaf CEO and her student

Leonie Jackson, chief executive of the Deaf Society, met Westpac’s Marilyn Challita when she was two years old and her family was still going through the process of accepting her deafness.

I remember meeting Marilyn and her parents like it was yesterday, although it was 23 years ago.

The family was still going through the process of accepting her deafness, trying to navigate options and understand what her future might look like. I’d been asked, as a deaf person, to visit so they could openly ask questions about what it's like to live as a deaf person.

Marilyn's parents were beautiful. They wanted to do whatever they could for her and were very committed to her development.

Her mother learnt Auslan [Australian Sign Language] and came into school to see how we as deaf teachers worked with the kids. She volunteered her time at the school; she even cooked lunches.

When Marilyn’s younger brother was old enough, her mother asked if he could come in too although he was hearing because she wanted the siblings to share the same experience. He learnt Auslan, and they became very close. Her father struggled a little more as he had so many work commitments and didn’t have enough time to learn although he wanted to, and the same with her other two siblings.

Marilyn’s a smiler. She’s lovely and warm to be around. She was always a determined, hardworking student. Even when the subject was difficult, she had a really strong work ethic. I could see early on she was going to go far in life.

When she realised she wanted to work at Westpac after visiting as part of a school signing choir, I knew she would do it. Like a dog with a bone, she put her mind to it and wouldn't let go until she got it. I rarely saw that level of determination in other students.

There were some days when she was frustrated, but she always found a way around obstacles, and she's very good at seeing the bright side and finding humour in the moment. And that's a good way of breaking the ice in difficult situations.

I remember when she was learning to read, she’d been finding it difficult and one day all of sudden she got it. When I asked her how, she said: “I sign the words in my head and then it makes sense.” That was an “a-ha” moment for her, to see the two languages and relate the two modes to make sense.

When I became CEO of the Deaf Society, it hadn’t dawned on me how pivotal that was until someone pointed out that I’d actually broken two glass ceilings – to be a deaf chief executive, and a woman.

I was attracted to the job because of the Deaf Society’s vision: equity for deaf people. When the day comes for me to leave, I hope my legacy will be to have helped create a society where I’d be able to get a job in any mainstream organisation based on merit, and that my deafness is not an issue.

To get there, we need to help more organisations realise that creating an inclusive working environment is simple and doesn't cost a lot, and that things are not automatically harder for a deaf person.

Marilyn’s professional career, and the joy she gets from it, is a sure sign we’re stepping closer to that future. 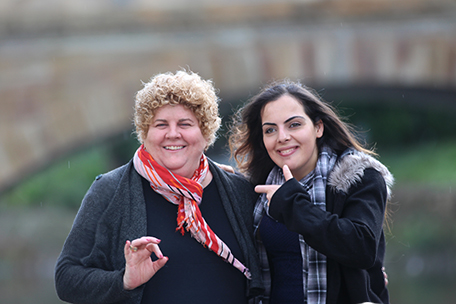 I don't actually remember meeting Leonie, because she’s been in my life since I was two so it feels like I've known her forever.

My mum’s told me a lot about her from those early days, how she helped my family learn about the options for deaf children, and helped teach us sign language.

She encouraged my mum to take me to Roberta Reid preschool for deaf children, where Leonie was a director at the time, and then to Thomas Pattison School, where she was my teacher.

It was so good to have a deaf role model as a teacher, who taught in fluent Auslan.

She was really inspiring, and explained things very well. She was one of my favourite teachers, even though she was quite strict! But I think that was a good thing, because it made sure I did all my work for her so I didn’t get into trouble!

I know she was proud when I got my job at Westpac. I was in my school’s signing choir, and Westpac asked the choir to perform at their Concord office. I’d never thought about working in an office, but when we visited, I started dreaming about it. I asked my teacher if she thought I could do work experience there, which she helped coordinate and I loved it. I asked for an interview at the end, and have been working there for nine years ever since.

I was so proud when she became the CEO of the Deaf Society. She was the first deaf chief executive in its 100-year history.

It’s great having someone like her in that position because she's part of the Deaf Community. She’s passionate about gaining equality for deaf people so they don’t have to think twice about applying for jobs and workplaces are naturally inclusive so being deaf is not an issue.

I feel like my job at Westpac is a good example of that. Yes, it’s been hard sometimes, but with support, equity is achievable.

Deaf people can do anything that everyone else does; the only thing we can’t do is hear. And with today’s technology, there are work-arounds. Communication can sometimes take more effort but it’s not impossible.

At work, I’m setting up an Auslan group so my hearing colleagues can improve their signing skills. This is a good way to try to break down that stigma, to let them know it's not as hard as it seems. It's more about changing attitudes.

Leonie is a strong, professional role model, and I really look up to her. She’s deaf, she’s a woman and mother, and has a high-level position. I feel like I can model off her, and learn a lot to improve myself professionally and work my way up the ranks.

She’s proof that with hard work, and access and inclusion, it’s not impossible to get to a position like hers. It’s reinforced my belief there’s no reason I couldn’t potentially be the CEO of a bank one day, if I wanted.

The Deaf Society provided advice to Westpac in relation to its Auslan pilot for customers who are deaf.