GOOD PAIR: From mentor to mate

After my first phone call with Chris, which was pretty abrupt, I remember wondering whether he actually wanted me to start my internship.

When I turned up, it was like a re-enactment of the call. He bailed me up, this six foot seven, very senior guy, and his first question was: “I want to know what you want out of this internship. Why are you here?”

I’d never been in a big company like Westpac before – I’d done some landscaping and labouring gigs before I got into university – so I was totally out of my comfort zone. All I could think of to say was: “I really like business and apparently you guys do a lot of that stuff.”

Not really the impression I’d hoped to set on day one!

Three years later, I now know Chris is not abrupt at all. He’s what I’ve come to think of as a 30-second warrior. He’s busy running a massive team and multi-billion dollar portfolio, so he deals with things efficiently – a skill he’s instilled in me too.

After a few days, I got up the nerve to ask him if I could shadow him for a day or two. He let me come along to everything – big meetings, customer visits, the works. It gave me great exposure to how he operated and something really clicked between us. We had a strong connection and he asked me to stay on after my internship to work part time while I finished uni.

It wasn't all smooth-sailing. I did the hard yards. It was a five hour round trip between my home on the Central Coast and the office in Sydney and, quite honestly, the travel was horrible. And Chris drove me hard for those first twelve months. I’m now glad he did. He really helped me knuckle down, to learn the business, how to act with professionalism, to respect people, how to progress. He even taught me how to tie a tie.

At every opportunity, he’d throw me in the deep end. I used to hate doing presentations, I was so nervous, but he’d ask me to do them. He’d pull me aside afterwards, and give me feedback to improve. Now, I love doing them. Last week was the ultimate – I spoke to a room of around 2500 people when I presented Chris the award for Career Trackers Supervisor of the Year.

Chris knows his stuff and has earned his stripes over almost 11 years with the bank. He’s a natural leader. No matter what issue I bring to him – whether it’s work-related, about my finances, relationships – he gives me his time and great advice. Even though he’s no longer my manager, he’s always the first to pull me up when I’m steering in the wrong direction, and the first to offer praise.

The best part of our relationship now is that the advice flows both ways. It's not just me taking from him anymore. We also love to give each other a grilling and are often in tears of laughter because we’re talking dribble to each other so much.

I always thought these were just the things that all mangers do, but now I realise it’s pretty rare. I was lucky.

I’m not sure where I’ll land when I finish my law degree next year, but I’d love to use my knowledge to help Indigenous businesses. I definitely want to be a leader, and be someone else’s Chris. 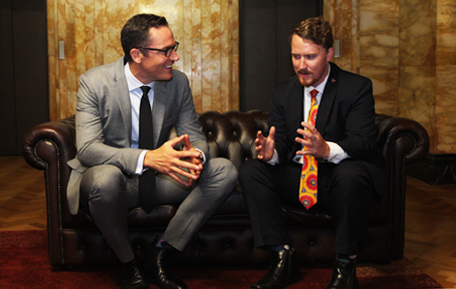 When Jack came in to work on that first day of his internship, I saw this young guy, with his hair out of place, unshaven, who’d probably never been in a corporate environment, and never put on a tie.

But he had this real confidence about him. It was obvious to me that he was motivated to learn.

His ability to connect with people is remarkable. He’s just one of those rare, really engaging people. You warm to him instantly.

It made my role as his mentor much easier. His keenness to learn, willingness to listen and soak everything up, motivated me to invest more of my time in him.

I only realised how much closer we’d become – rather than just having a working relationship – when he brought his father down from the coast to have lunch with me. That was quite special. I’d also met his older brother a few times – he’s interning with Atlassian. I know how important family is to him. That meant a lot to be let into that circle.

He’s always surprising me. He didn’t think twice about emailing Westpac’s CEO Brian Hartzer to set up a coffee with him, and then telling me I should think about taking on board the advice Brian gave him!

And he has no problems putting me in my place and ensures I’m always reflecting on my actions. He's a pretty honest, direct guy. He would sometimes pull me aside and question decisions I’d made for the business, and his fresh-eyes would help me see things differently. That’s been brilliant. I’d underestimated from the start how much I would learn from Jack.

I'm really impressed by is his commercial acumen. Having come in to us with no idea about how a bank operates, only three years later, he has a good grip on operations and he’s now sitting with the legal team and starting to provide advice to people he used to shadow in the early days of his internship. That’s no mean feat.

What was most remarkable for me was seeing him present last week in front of 2500 people on the edge of their seats listening to him. What a contrast from when he would battle his way nervously through a talk with just 20 people in a room. I know others who’ve been doing what they do for 50 years who wouldn’t be able to do that. That says a lot to me.

When Jack named me for the CareerTrackers supervisor award, it was genuinely the most rewarding thing that’s happened to me from a career perspective. That’s because it wasn’t recognition of something I’m employed to do. Mentoring Jack was something that I’ve chosen to do outside of that, which has become a huge part of my own life and development.

I’ve been able to see him build his breadth of professional experience and develop as a human being. It’s now up to him to grab that, shake it and run with it. And I've no doubt he'll do that. He’s an impressive talent. How great would it be for him or one of the other brilliant CareerTracker interns to make their way to the top, to have one of our executives come through the program. That would be an amazing story.

But I’m still waiting for the day I don’t have to straighten his tie.


In 2015, Westpac committed to recruit at least 400 university student interns who identify as Aboriginal or Torres Strait Islander through the CareerTrackers Indigenous Internship Program, over ten years. Find out more about Indigenous Careers at Westpac or contact the team at  indigenouscareers@westpac.com.au.

The battle for which days to WFH and the office #workplace

The battle for which days to WFH and the office

Workplace civility is more than just being nice #workplace

Workplace civility is more than just being nice