Don’t ‘fight’ WFH despite challenges for some, PC says

A new report from the Productivity Commission on working from home has confirmed what many people suspected: while it’s been great for some people, it doesn’t suit everybody.

However, it does offer plenty of fresh notable data points, finding the percentage of the workforce doing home-based work jumped from 8 per cent in 2019 to 40 per cent in 2020, before falling back to 38 per cent this year.

What’s not to like about dodging the daily grind of commuting, the report asked, concluding WFH was “one of the biggest changes to the way we work in the last fifty years”.

“In 2019, full-time workers in Australian major cities spent an average of around 67 minutes per day commuting, which in terms of forgone earnings amounted to $49, not including vehicle costs. For those taking public transport, the average time value and transport cost totalled $57 per day,” the report, released yesterday, states.

“But few workers prefer fully remote work, and most want to spend some time working from the office. There are actual or perceived costs to working from home, such as reduced opportunities for collaboration and networking, reduced face-to-face interaction with managers, and consequences for long-term career prospects.”

“Nonetheless, many employees highly value the ability to work from home, and are willing to change jobs or accept lower wages in order to continue working from home.”

While the report unsurprisingly predicted more WFH in the post-COVID world, professionals agree the trade-off is missing a significant amount of the hard-to-quantify benefits of being in the office.

“The human element is missing,” says Sydney architect Brian Mariotti, whose life has been an endless string of Zoom meetings with colleagues and clients, although he at least can also go out on site.

“The three-dimensional technology is great…(and) working from home is gold for introverts.

“But as a team worker I’ve found there have been very few of those constructive conversations you can have with colleagues to solve problems and produce unexpected results… (Zoom meetings) can be very stilted, because there are so few non-visual cues and there can be a reluctance to speak up.”

Clinical psychologist Penny Huisman is the manager of student wellbeing at one of Sydney’s universities, with a large team of permanent and casual staff to manage.

She says some personal contact jobs simply cannot be done in that environment. 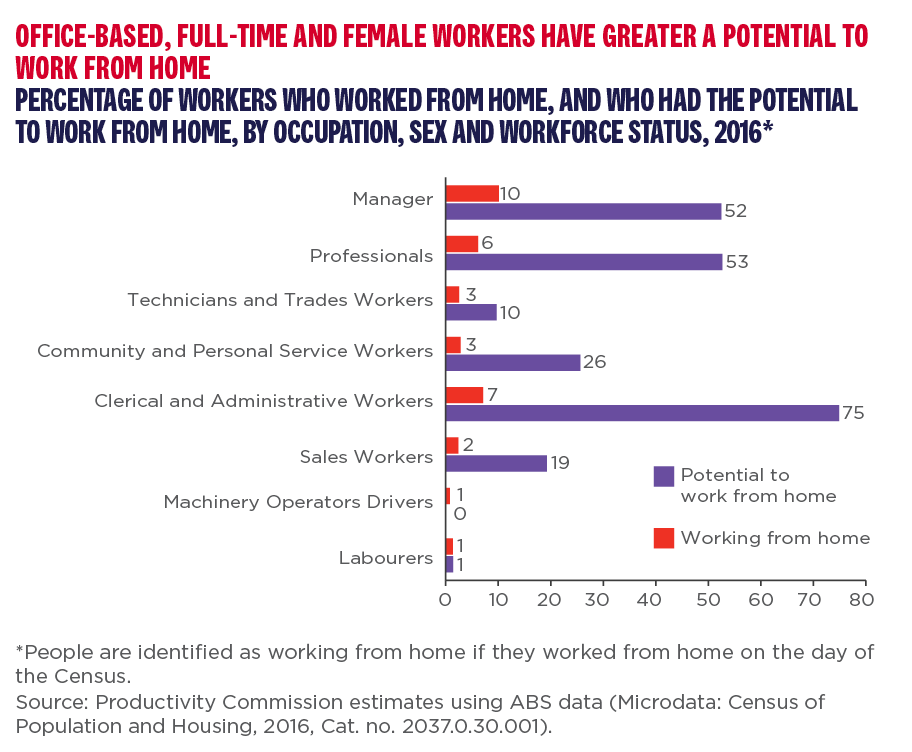 “What if some young person is depressed or suicidal? That’s where camaraderie is so hugely important, and it works far better to have even a short conversation face to face than any amount of work off a screen,” she says.

“That’s extremely difficult to do with new staff,” she says. “Managing the creation of a team is very challenging indeed without a physical interaction.”

Investment banker Stewart Palmer shares that view, if in an entirely different context.

“Young people are not getting much in the way of mentorship, to the extent that trainees aren’t even physically meeting their colleagues,” he says.

Still, Productivity Commission chair Michael Brennan says that “on balance”, WFH’s benefits can be significant in terms of flexibility and time for employees, and “could even increase the nation’s productivity”.

Indeed, the report says that “while the process of change will be challenging for some, it is a fundamentally positive development overall, unlocking newfound value to be shared between workers and firms” and “governments should not fight it”.

“Risks can be managed but we should keep an eye on them and be ready to intervene if necessary,” Mr Brennan says.

As a banker whose job is to raise capital for Australian companies, half of it generally sourced from overseas, Mr Palmer suggests that WFH is harder in his industry without established relationships.

“It’s true that whether I’m in the office or at home, the target company doesn’t care,” he says. “I deal a lot with people I knew already. That’s easy, but new clients are very difficult to manage by Zoom.’’

That’s if it all works of course.

“The whole technology thing has to run completely like clockwork and there’s no one you can call out to for help: no assistant sitting beside you,” Mr Palmer adds.

So, what’s he looking forward to when the COVID restrictions ease?

“A mix of office and home,” he says, referring to the “hybrid” model many companies are planning for.

“I live on my own and I’d like to spend between two thirds of the time in the office because I really like to go out for coffee with colleagues and contacts.”

And don’t get him started on travel.

“I haven’t set foot on a plane in two years and I can promise you it’s a lot easier to persuade people to invest when you are sat down in front of them.”