Happy new financial year – and what a happy time it is for investors and property owners after the extraordinary surge in asset values since the COVID sell-off.

Sure, eking out income remains a challenge, given the further contraction of bond yields and bank deposit rates. But as they prepare their end of financial year (EOFY) tax returns, investors may well be shocked at the extent of their capital gains.

At Wednesday’s EOFY closing bell, Australian shares (as measured by the S&P/ASX 200 index) had returned 24 per cent, powered – like the rest of the world – by the biggest monetary and fiscal policy injection of stimulus ever seen. The gain is the best since the 1986-87 year which, ominously, preceded the October 1987 share market crash. Total returns, including dividends, were 28 per cent.

Since 1938, there’s only been nine stronger years, as measured by the broader All Ordinaries index, according to Bell Potter’s veteran broker Richard Coppleson.

David Bassanese, the chief economist at ETF provider BetaShares, adds: “The past year has seen some very strong performances, as one would expect give the V-shaped recovery in global economic growth, major policy stimulus and strong equity markets.”

While the tech sector dominated the headlines, the charge was led by the ‘old fashioned’ end of the market such as banks and resource stocks.

The leading ASX200 performer was Chalice Mining with a 647 per cent increase, the gold and base metals hopeful edging out lithium miner Pilbara Minerals (up 522 per cent) and investment platform provider HUB24 (206 per cent) for EOFY line honours. 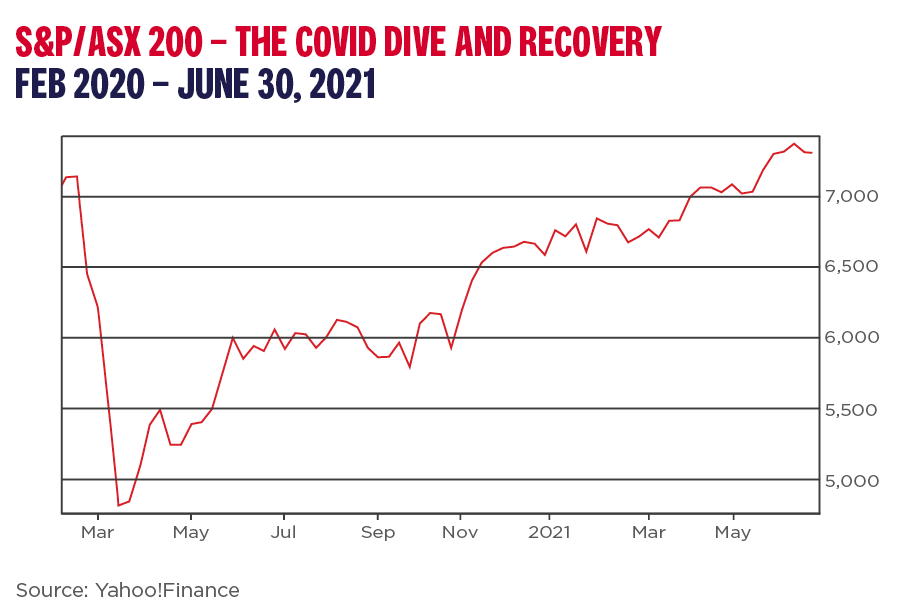 Shares in buy-now-pay-later dazzler Afterpay surged 90 per cent and at one stage were 260 per cent higher. The worst performers were the China-focused A2 Milk Company (down 68 per cent), tech group Appen (60 per cent) and gold miner Regis Resources (53 per cent off the pace).

As has been the trend in recent years, the ASX lagged the performance of US markets. The Dow Jones index is 37 per cent to the good, while the tech-rich Nasdaq index bounded 48 per cent. (Bear in mind that for the US and many other countries EOFY is December 31, so June 30 is more of a halfway reflection point).

All of this bodes well for superannuants. Chant West figures to the end of May show super funds were on track for their highest return in 24 years. Growth funds were up almost 16 per cent at that point and balanced funds rose a more, well, balanced 11.7 per cent.

But as Paul Keating once said, if you don’t live in Sydney you’re merely camping out. Extending the metaphor to investors, those not exposed to some of the new-age asset classes, such as cryptocurrencies, were drinking billy tea, rather than French champagne in what some politicians would call an inner-city wine bar.

Bitcoin, the widest traded crypto, ended the year more than 288 per cent higher and at one stage was up more than 600 per cent.

The real crypto equivalent of Keating’s highly collectible French empire clocks turned out to be Dogecoin, which gained a stunning 11,000 per cent and at one stage was 31,000 per cent higher.

Given Dogecoins were invented as a joke currency, the unanswered conundrum is whether fiat paper currencies have really had their day, or whether investors have gone barking mad.

In the bricks-and-mortar world, housing – or, more exactly, house prices – continued to be a perennial discussion topic at barbecues from Darwin to Devonport.

The more than doubling of iron prices to north of $US200 a tonne was reflected in the valuation of Fortescue Metals, the biggest pure-play producer that saw its shares surge more than 90 per cent.

Viewed as a bellwether of grass-roots industrial activity, the copper price, surged 68 per cent amid supply concerns and the realisation that electrical vehicles (EVs) – which are enjoying rising demand – will require huge volumes of the red metal.

The ‘quiet achiever’ EOFY award goes to the price of tin, which almost doubled over the year amid supply concerns. Or perhaps it was the demand from all those tinfoil hat-wearing conspiracy theorists …

Despite the prevailing narrative about renewables and the surging interest in emerging industries such as hydrogen and EVs, fossil fuels refuse to die.

West Texas Intermediate, the benchmark US crude, gained 87 per cent, while the US reference gas price, Henry Hub, more than doubled.

The even bigger shock was the more than doubling of thermal coal prices, given the black mineral’s maligned role in high-emission power generation.

With the price of most ‘soft’ (agricultural) commodities surging and with healthy crops to boot, farmers will be almost cracking a smile as they write their cheques to the ATO.

Wheat prices have gained some 50 per cent and beef prices are at record highs. Almonds are one of the few food commodities to lose value, down some 25 per cent on the back of excess Californian supply.

Savers, meanwhile, continue to suffer diminishing returns, as reflected in the Reserve Bank of Australia’s official cash rate down (60 per cent) and the 90-day bill swap rate (down 70 per cent).

But it’s a different story with the long ‘tail’ of the bond market, which is starting to wag in expectation of interest rate increases here and abroad.

The local 10-year bond rate gained 76 per cent, while the equivalent US rate surged 122 per cent.

Broker Ord Minnett notes the RBA’s “extreme liquidity” has lifted asset prices, lowered rates and suppressed the Australian dollar – all positive for stocks. The firm adds household savings at $162 billion, or 8 per cent of GDP.

“Together with vaccine rollouts, powerful jobs growth, record wealth and excess savings should drive a consumer boom (which is) very positive for earnings growth,” the broker says.

BetaShares’ Bassanese is more sober about the share market’s prospects in a nation that has swathes of its population in renewed lockdowns, noting the “growing” risk from potentially rising bond yields given lofty valuations.  George Toubia, Westpac Private Wealth’s chief investment officer, aired similar concerns in a recent note, pointing out that “corporates now have to prove that they can deliver on their medium-term earnings priced in the current valuations”.

“Consequently, we expect equity indices in 2021 and beyond to remain in a narrow range, except for certain parts of Asia,” he said.

So, should investors expect similar eye-catching returns in financial year 2022? Who knows.

The only certainty looks to be more twists and turns as economies grind through the one-in-100-year pandemic.


The views expressed are those of the author and people interviewed, and do not necessarily reflect those of the Westpac Group.