This week’s “Black Friday” cyber sales are expected to propel online shopping to historic highs, building on the significant uptick in households’ embrace of e-commerce during COVID-19.

But as shoppers increasingly flock online, so too are malevolent scammers and hackers, according to experts.

“Black Friday and Cyber Monday are always our busiest days on our fraud tracking system,” says Ben Young, Westpac’s head of fraud. “The processing of all those credit and debit card transactions, every second, spikes significantly on those days, with huge volumes of genuine and possible fraud events.”

Given the significant uptick in people buying online, Young says it is timely to remind e-shoppers about the two key “watch outs”: scams and fraud.

“Both of them are often quite confronting, very inconvenient, and both can happen to anyone,” Young says. “And, fortunately, there are ways that both can be avoided.”

Darryl Freeman knows only too well how frustrating – and easy – it is to fall for a scam.

“I felt like such an idiot! I did not believe this would ever happen to me,” says the seasoned lawyer who had commonly shopped online with no problems until one night during an internet hunt for a new barbeque.

“I clicked on the top ad in my search, which took me to a big, well-known barbeque website, very sophisticated, they had all the products there, and I picked out the one I wanted,” Freeman says.

“It said if you do a direct deposit, we'll give you another 5 per cent off, so it had that incentive for me to do the direct deposit. I was in a bit of a rush, and that's how I got trapped.”

When he didn’t receive the expected delivery, he made inquiries only to discover the company that took his money had been incorporated just months before and had set up the very convincing, but fake retail website.

These types of online shopping scams have already cost shoppers almost $6.9 million this year, more than 40 per cent higher than the $4.8m for the total 2019 year, according to ACCC ScamWatch statistics. It’s the fourth most costly scam for Australians, after investment scams, dating scams and threat to life scams. 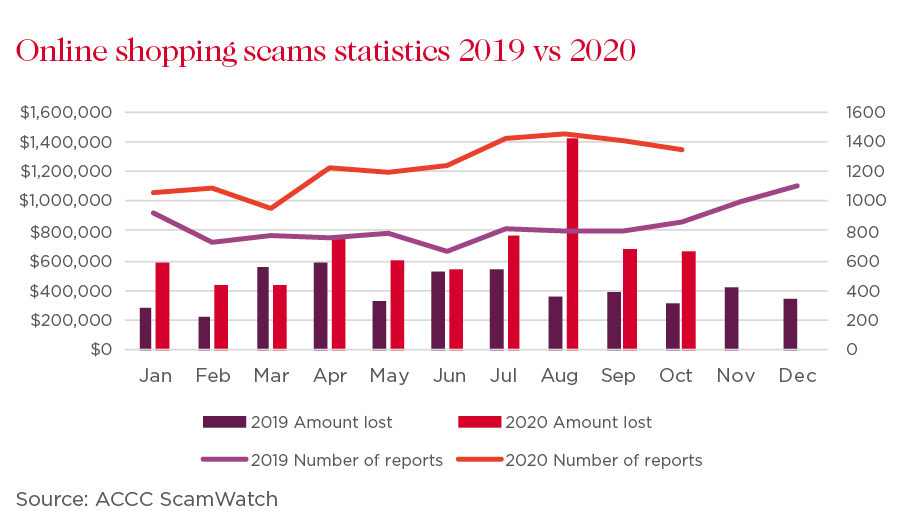 “The biggest tip-off that a retail website is a scam is how they ask for payment,” Young says.

“Scammers will often ask you to pay by transferring funds directly into an account, or using a pre-loaded gift card or cryptocurrency – but if you do, it’s unlikely you’ll see it or your purchase again.

“As well as doing all your usual checks on a seller’s legitimacy, where possible, pay using a credit card, because you get much more protection.”

“When you shop online, you might go to a secure looking website, it all looks fine, you buy something and you happily get your legitimate goods delivered as you expect,” Young says.

“But what you don't realise is that, although the business is not malevolent, its website’s security might not be as good as it should be, it gets hacked and your card credentials are ‘harvested’ by a third party, who either sells or reuses your credentials elsewhere to buy things for themselves.”

While historically there has not been much a victim could do to prevent this, Young says earlier this year Westpac released a new feature in its banking app to combat the threat. Customers can use a digital version of their physical card which has a dynamic credit card security code – often called a CVV or CVC – in place of the static code found on the back of your physical card. It changes every 24 hours and is found under the “details” tab of the credit card information in the app, he explains.

“It’s by far and away the most impactful thing that can reduce a customers’ likelihood of experiencing fraud, which is the most common negative thing that can happen to you online,” Young says.

"Among the customers using the dynamic digital card since it was launched earlier this year, rates of fraud are much lower – up to 10 times lower – than for people who use their physical card when they’re shopping online."

Young says banks’ security systems are likely to pick up anomalies quicker than affected customers, but he advises customers who notice an issue to call their bank as a priority.

2. Check website authenticity. If shopping at an unknown or unfamiliar retailer, search for reviews beyond the retailer’s site and/or use a website reputation checker.

3. Use secure payments. Where possible, pay using credit card or PayPal, and if available, use the dynamic CVC on your digital card. Avoid payments such as direct transfer; and purchases with cryptocurrency or gift cards are almost always scams.

4. Check link legitimacy. Check that a link is sending you to a website you recognise by hovering over it before clicking. Confirm the spelling of the URL is the website you’re expecting.

5. Verify buyers & sellers. Scammers can easily pose as both buyers and sellers on platforms like Gumtree, eBay and Facebook Marketplace, so be cautious and read the ratings and reviews of sellers. Don’t be afraid to ask for a video call to see the seller and/or goods, not just still photos.

Merchant ‘tap and go’ choice a boost in challenging times