In the wake of the once-in-a-century pandemic that dragged the nation’s economic activity down a record 7 per cent in the June quarter, the just-completed corporate profit reporting season was never going to smell like a bunch of roses.

As Westpac’s economic team notes, consumer spending shrunk 12 per cent for the virus-blighted period. To no-one’s surprise, the decline was led by sectors such as transport and accommodation – down 86 per cent and 77 per cent respectively.

This was duly reflected in the average earnings of the top ASX-listed industrial stocks tumbling 20 per cent for the period, marking one of the worst – if not the worst – reporting seasons on record. 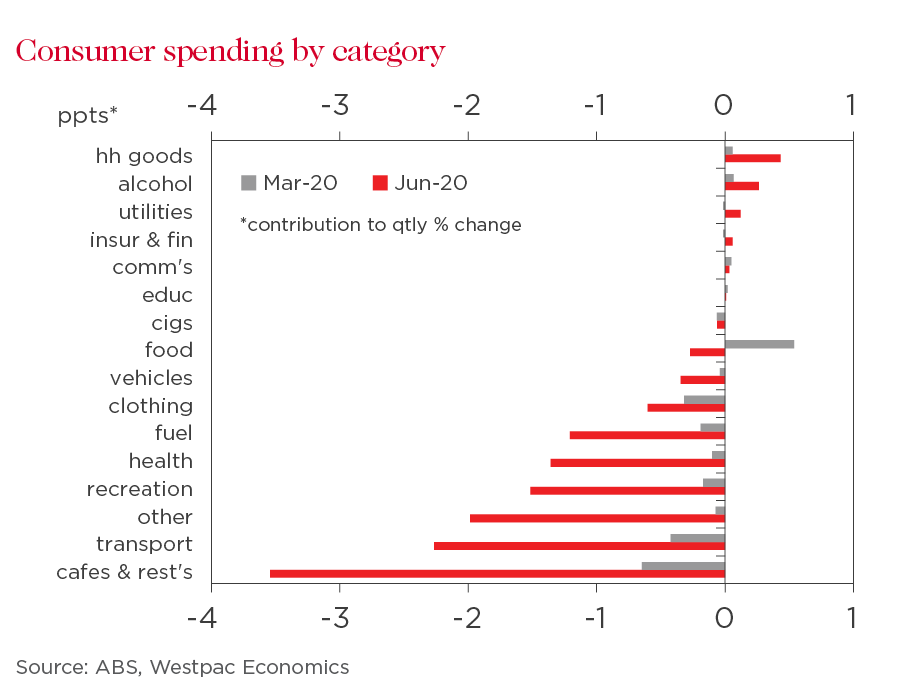 But behind the top-line numbers and bland outlook statements, the results reveal a more intriguing – and often paradoxical – picture of consumer behaviour in the COVID-19 era, with clear winners and losers emerging.

A key feature of the results was the extraordinary strength of the discretionary retail sector – and not just the bumper profits from e-commerce players such as Kogan.com that have benefited from the lockdowns.

As Harvey Norman chairman Gerry Harvey observed as he watched items such as chest freezers walk out the door: “In the 60 years I have been in retail, I have never been in a time like this.”

Over at JB Hi-Fi sales gained 11 per cent for the year, to $7.9 billion. A solid showing by any reckoning, but nothing like the retailer’s 31 per cent surge in June quarter turnover as home workers sought both serious tools of trades and “workplace” distractions: anything from DVDs to wide screen TVs. Likewise, Wesfarmers reported strong sales growth across its Bunnings and Officeworks businesses as “customers spent more time working, learning and doing projects” at home.

Monash Investors co-founder Shane Fitzgerald says while retailing broadly has been a coronavirus winner, “anything online has just been spectacular.”

Of course, during the lockdowns people couldn’t go to restaurants or to the movies, or take holidays, adversely impacting businesses like Flight Centre and Qantas, both reporting large losses. Come to think of it, people couldn’t go the gym or hire a dog groomer in some areas, or visit the hairdresser (unless, of course, it was “essential”).

“Discretionary income is what it is,” Fitzgerald says, pointing to the surge in government payments, ala JobKeeper. “That money was free money people had and they have gone off and spent it.”

Fund manager Roger Montgomery concurs that many domestic businesses are also benefiting from the $42 billion annually that normally would be spent offshore.

Then there’s the curtailed expenditure on dining out and entertainment. As Montgomery says: “Either because of fears of infection or mandated restrictions.”

Judging from the retail trends depicted in the just-completed profit reporting season, the “typical” householder is likely to be clean-shaven, surrounded by new tech gizmos, takeaway food boxes and updated décor.

As the stellar results from the The Shaver Shop chain attest, stay-at-home workers are putting their best face forward for their Zoom meetings with the boss, as online annual sales jumped a massive 103.5 per cent.

But when the laptop cameras are off, they’re possibly beating boredom with booze – and betting. Reinforcing the notion of gambling as a sure bet even in troubled times, online bookmaker PointsBet reported a 69 per cent surge in Australian turnover, to $830 million.

Wagering leader Tabcorp reported turnover of its key lotteries division rose 15 to 30 per cent during the Covid-19 restriction periods.

As for groceries and alcohol, Woolworths and Coles capitalised on the earlier panic buying of grocery staples such as toilet paper. But the tills were ringing even more frenetically at their liquor outlets such as Dan Murphys and Liquorland.

Meanwhile, the more abstemious and house-proud consumers were rushing to buy sofas, appliances and lamps – as evidenced by knock-out sales results from niche retailers such as Nick Scali, Temple and Webster and Beacon Lighting.

While locked-down householders could be expected to splurge on domestic accoutrements, the performance of the luxury sector casts doubt on the “we are all in this together” mantra.

For instance, upmarket dealer chain Autosports Group reported that its total car sales collapsed 24 per cent in the April to July period, but luxury sales declined only 8 per cent and are recovering fast. Sales of one prestige marque – Audi – soared 16 per cent in the virus-afflicted period.

From a global perspective, Peak Asset Management notes that luxury brands such as Louis Vuitton Moet Hennessy, Estee Lauder and BMW suffered in the March quarter but then rebounded in the June quarter – much more strongly than mass-market names such as Adidas and Budweiser.

Locally, one of the quirkiest manifestations of the unlikely retail sales boom has been a rev-up in motorbike sales – and not just from leather-clad baby boomers rediscovering the freedom of the open road.

According to the biggest bike dealer Motorcycle Holdings, the strongest demand came from families seeking a COVID-safe outdoor activity.

Meanwhile, a local consumer survey recently carried out by investment bank UBS confirms that spending intentions have held up better than expected – even with the big-ticket items of property and cars.

Conducted in early July, the online survey of 1000 respondents show 35 per cent were looking at buying properties, compared with only 20 per cent in the third quarter.

Similarly, 40 per cent were eyeing a vehicle purchase in the next six months.

Despite the job-wrecking pandemic, only 21 per cent expected to work fewer hours, but just 12 per cent factored in a wage decrease. “This may suggest consumers expect COVID-19 to have only a temporary effect on income,” the firm says.

So, what happens as we emerge from our metaphorical doonas into a denuded landscape of empty airports and office towers? According to UBS, the market expects corporate earnings to recover by just over 7 per cent in the current year – perhaps in view of a vaccine emerging sooner rather than later.

Montgomery says many companies exceeded the market’s expectations and earnings guidance has been less negative than expected.

“This brings hope that 2020-21 may not be so bad for equity investors after all,” he says.

Indeed, Westpac chief economist Bill Evans last week upgraded his growth forecasts for the economy in 2020 from minus 4.7 per cent to minus 3.5 per cent, driven by a better outlook for the September quarter, offset by a less upbeat view on the final three months of the year.

The severity and duration of Victoria’s lockdowns remains a wildcard, as does the risk of “second wave” outbreaks elsewhere.

Given JobKeeper contributed a $31 billion income boost on its own in the June quarter, the tapering of government subsidies will reveal who is and who isn’t wearing clothes when the tide recedes. And in turn, which companies might be exposed come the next reporting season in February.