Easy QE-driven gains thing of the past

As we progress through 2019, softer global economic momentum has seen the world’s central banks left with no choice but to slow down – and even cease – their exit from the extraordinary unconventional policies that have driven markets since the global financial crisis.

It seems “slowbalisation” isn’t desirable at a time of political upheaval as asset-poor citizens revolt after a decade of almost universal asset price appreciation in equity, credit and real estate.

As for Australia, it’s our belief that that the permanence of zero “real” yields (nominal yields less inflation) is upon us.

Technological innovation, regulation, competition and changing consumer preferences are driving a period of significant transition and the Australian consumer is not going to provide the same level of economic momentum as the past due to high household debt, very modest wages growth and the diminishing wealth effect arising from lower property prices.

In turn, we are heading into a period where sensible yield enhancement will become more important (than even before) for investors. As we’ve seen recently, markets are now pricing in cuts to the official cash rate by the Reserve Bank in coming months, and the 10-year government bond yield fell to a record low 1.72 per cent.

In terms of growth, the technology, food and healthcare industries will continue to present opportunities amid a more mature phase in the domestic banking, real estate and consumer discretionary sectors. Examples include businesses implementing growth initiatives, such as those delivering affordability services and solutions, domestic companies establishing a global profitable presence, as well as the restructured energy and mining industries. In addition, bank capital requirements will continue to empower alternative providers of capital and corresponding investment opportunities across multiple sectors.

What all industries would benefit from is the Australian government empowering a bold wave of investment growth.

While it remains to be seen if the extended absence of a national energy policy that provides security of cost-efficient supply will be resolved following the election, policies that foster investment can not only help address the nation’s challenges across energy needs, but also in the agricultural, infrastructure and education sectors.

In energy, for example, the dominance of coal in our energy generation mix (70 per cent) means we are vulnerable to structural issues leading to higher wholesale prices, as seen in the last two years. By 2030, 55 per cent of Australia’s coal-fired power stations will be 40 years old and will need to be replaced. Action is clearly needed – and desired: a recent Westpac survey of small businesses with Deloitte found decreasing energy costs was the equal-highest most helpful thing government could do for them. 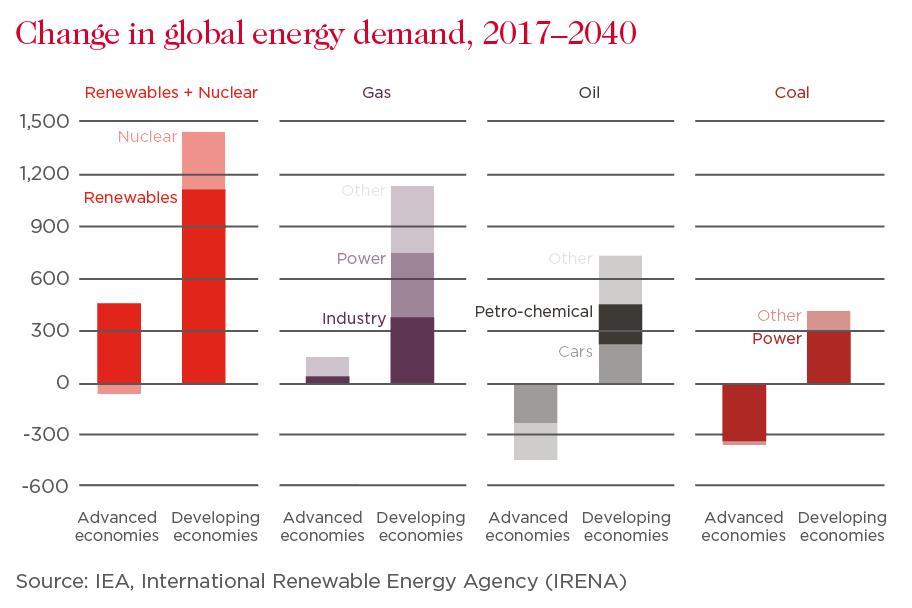 The government could also set an example of long-term thinking by extending the R&D horizon of platforms like the Commonwealth Scientific and Industrial Research Organisation (CSIRO) and building CSIRO-like innovation hubs in other sectors. In turn, this could set the scene for new drivers of growth and investment opportunities.

Globally, investors’ consideration of opportunities needs to be viewed through the prism of the gradual decline of economic growth rates in China as the new permanent reality. Through our “Asia 2.0” thematic lens, our focal point is the ongoing rise of the middle class amid the move from an export-oriented region to a domestic-orientation powered by services and consumption.

We see the emergence of winners in South East Asia at the expense of China, Japan, Korea and Taiwan.

The appreciation for South Asia’s growing role is overdue. When it comes to India and the ASEAN countries, many of these economies are already growing at a faster rate than China. So while China is manoeuvring towards a lower and more sustainable growth rate, the economic momentum of the combined “India - ASEAN region” will equal China’s overall impact within 10 years, assuming the current rate of growth persists.

In a world defined by increased political tensions, the ASEAN group is likely to be more coordinated. In light of this, we assess South Asia as the core beneficiary of trade tensions and supply chain reconfigurations and anticipate that foreign direct investment and offshore capital to increasingly divert to the region, at a time when India is yet to fully unlock its population’s potential.

Taking two broad industries for example, we expect trade tensions to (a) benefit the three major garment exporting countries in Asia (these being Vietnam, India and Bangladesh) at the expense of China and (b) benefit countries like Vietnam and Malaysia as a reliable source of manufacturing for technology and communications equipment, given global companies in this sector (such as Sony, Samsung, Panasonic and Intel) already have existing presence in these countries.

Companies exposed to domestic growth across Asia present opportunity not just in the e-commerce and e-services sectors but also in education, financial inclusion and healthcare. As an example, take the financial inclusion opportunity, which relates to individuals and businesses having access to useful and affordable financial products and services, and is embryonic across the region.

Financial services in several countries, such as India, the Philippines and Vietnam, continue be underpenetrated with state owned or big local companies holding the dominant market share.

In relation to healthcare and aging, the Asia Pacific region is the fastest ageing region in the world and already has some of the oldest societies, currently home to circa 550 million people aged 60 or above. Yet by 2050, Asia is expected to experience a further twofold increase in the number of older persons, with the population aged 60 or over projected to increase to circa 1.3 billion in 2050.

We expect markets will adjust their opportunity assessment of countries as they move from a period when they benefited from the “demographic dividend” to one where they face the burden of a “demographic tax”. Overall, the need for elderly healthcare and a viable framework to support that will rise, creating a large market and private sector investment opportunities over time to compensate for insufficient government spending.

These are just some of the mega-trends set to shape investment markets and economies for the next decade which will be very different from the last. From 2011 to 2017, unconventional monetary policy, or “quantitative easing”, led to almost universal asset price appreciation with little to no differentiation in business models, real assets and corporate issuers.

With less accommodation likely in the years ahead and asset prices peaking, the divide between sound and less-sound assets is growing, while industry theme, business model and sector durability becomes key.

It’s a world where businesses with sound addressable markets, greater immunity to disruption, strong balance sheets and investment capacity to adapt to innovation and change will win.