Australia’s financial services industry hired more women than almost any sector at the start of this year.

But when it comes to pay, the story isn’t as glowing.

Despite many companies’ commitment to pay equity, the gender pay gap in the Finance and Insurance Services sector widened to 26.6 per cent in May, up from 26.1 per cent in November.
This means the average woman working in the sector earns $1585 a week, $576 less than the average man, as measured by the Australian Bureau of Statistics’ average weekly ordinary time full-time equivalent earnings data.

The results are some of the key findings in the latest quarterly Financy Women’s Index (FWX) report, which shows that while women are making economic progress, an aspirational target for economic equality is unlikely to be realised for at least 10 years.

Overall, the economic progress of Australian women marched higher, helped by wages growth, more women in full-time work and an increase in board positions.

The FWX, supported by Data Digger, gained 1.4 points to 126 points in the three months to September, from a revised 124.6 points in June.

But when compared to the FWX Progress Target – a new aspirational guide on economic equality which could be hit in the next decade – of 173.3 points, the September result falls short by 37.5 per cent. The target is based on there being no gender gaps in wages and superannuation, gender equality on S&P/ASX 200 boards, increased female workforce participation and full-time employment, and continued relative growth in tertiary education. 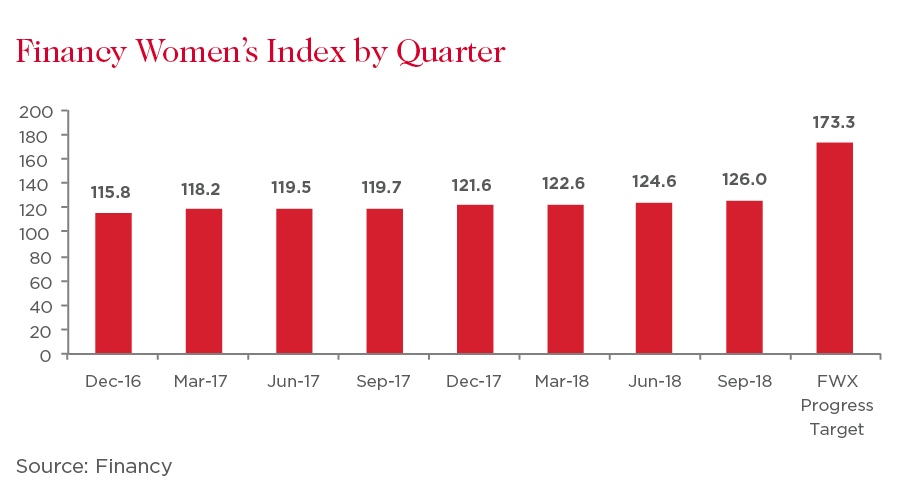 It’s a bold goal, and one I fear we may not hit in my working life, if I’m being totally honest.

But as for gender pay inequality, we must move quicker and address it in every industry. The Public Administration and Safety sector had the lowest gap of 5.8 per cent, followed by retail trade. At the other end of the scale are finance, rental, hiring and real estate services, and arts and recreation services.

The all industry figure improved slightly to 14.6 per cent.

Connie McKeage, managing director of listed fintech group OneVue, a sponsor of the FWX, described the findings on the gender pay gap in finance as disappointing.

“Although I have kept pace with the many proposals to address this discrepancy from long-term plans to legislated equality of pay, I cannot help but wonder how any professional board could allow management to continue what is clearly an unfair practice without a clear pathway forward to addressing it,” she says.

“As a public company CEO I appreciate it is not always possible to instantaneously address matters that may impact the bottom line, however that should not excuse having no plan at all.”

It’s possible that the widening of the pay gap was affected by the sector hiring more women, rising 5.1 per cent in the last quarter to 167,000 full-time workers in finance and insurance services, compared to a decline in men to 210,000.

The Association of Financial Advisers (AFA) CEO, Philip Kewin said, while the rise in female employment numbers in finance was pleasing, in the next quarter “what we’d like to see … is an improvement” in the gender pay gap.

Looking ahead, it’s clear that increasing the proportion of women in management roles from about 38 per cent -- according to 2017 Workplace Gender Equality Agency (WGEA) data – would help to address the pay imbalance, and many of the larger players have targets to do this.

Nicki Hutley, partner at Deloitte Access Economics, says achieving the bigger picture goal of economic gender equality, will require companies across the board to confront the barriers, such as outdated attitudes.

“To ensure greater equality is reached as soon as possible, we must be vigilant. And governors and organisations need to continue to develop and support programs for diversity and inclusion,” said Ms Hutley.

All industries have a role to play, and need to speed things up.