Disruption: to invest or just enjoy

It is one of this decade’s inescapable buzzwords.

But for the investor, it’s a fluid concept. A golden goose and a lame hen all at the same time.

Locally, there’s darlings Atlassian (which listed in the US), or unlisted Sydney-based graphic design platform Canva, which became a unicorn – tech speak for a company with a $1 billion valuation – in less than six years.  In the US, the FAANGs – Facebook, Amazon, Apple, Netflix and Google – have outperformed the broader stockmarket for several years as investors clamour for exposure to new businesses and technologies consumers have embraced.

But the list is also long of early-stage companies claiming to be the next Uber or AirBnB before being buried in the “MySpace graveyard” a few years later. Locally, stockmarket investors didn’t get the chance at the latest offering last month after small business fintech lender Prospa pulled its planned float just prior to listing.

So how do you get in on disruption? And what does it actually mean?

For Tony Grist, an investor and former director of telecommunications company Vocus, it can be the “holy grail”.

“Essentially it's all about finding businesses that are taking a slightly different approach,” says Grist, who is also head of Perth tech-focused investment firm Albion Capital. “The businesses that are getting some cut-through are accessing an industry that has cosy incumbents with a rich oligopoly. I mean, that’s kind-of the holy grail anyway for most…investors.”

It can undoubtedly be a high-risk environment which is attracting a lot more attention.

Earlier this year, Future Fund chief investment officer Dr Raphael Arndt delivered a speech titled “Investing in Disruption” in which he outlined the three strategies of offence, defence (which investments to avoid) and application (lessons from investments to apply in the future).

Morgan Stanley last month also released an 81-page opus on “self-disrupting ideas” in an attempt to “dissect and assess the structural evolution” caused by disruption in key industries.

On the local stockmarket, it highlights “successful self-disruptors” such as Domino’s Pizza, Aristocrat Leisure and CSL – big companies that had moved with technology, taken risks and reaped the market rewards. But it also highlights companies in need of self-disruption such as Coca-Cola Amatil, AMP and Telstra – big incumbent companies that struggle to be nimble and have sizeable market shares ripe for disruption. 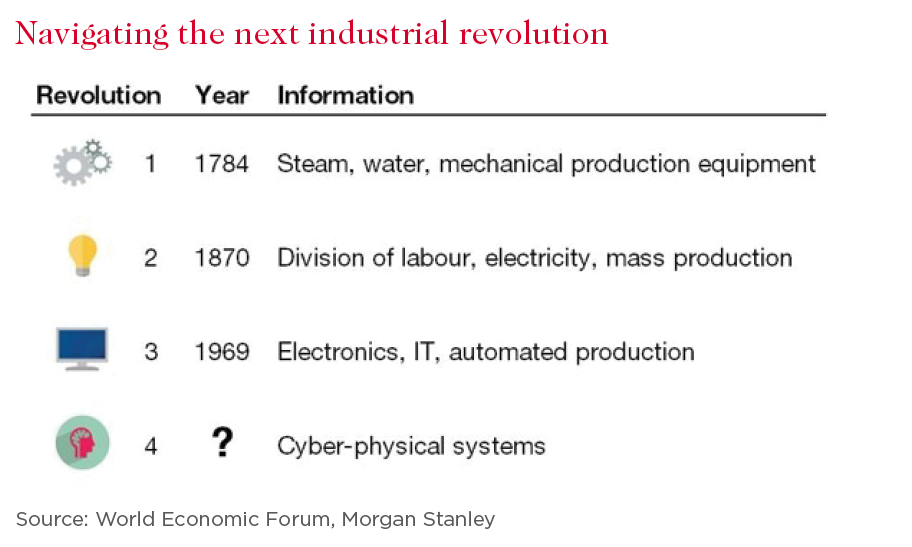 “Whilst there is an undeniable appeal in picking the next unicorn…the very nature of the risks at play and extreme competitive intensity that follows makes the task not insubstantial,” the note says.

For those not keen to pick individual winners, listed managed funds have sprung up, such as the Evans & Partners Global Disruption Fund, which aims to “provide investors with capital growth over the long-term through exposure to global companies that will benefit from disruptive innovation”.

In superannuation, Sydney-based Spaceship Super, formed in 2016, claims to manage $100 million centred on the one core belief of investing “where the world is going”.

But there are other gateways into disruption.

Start-up funding channels such as crowdfunding, venture capital, peer to peer lending and micro-cap listings have all captured investor interest.

Andrea Gardiner , the founder and chief executive of Jelix Ventures, says investing in the concept of disruption beyond the ASX is much like being in a start-up – you have to be ready to fail.

“It’s a very, very high-risk asset class,” she says. “When people ask me about investing in the area, I always ask them this: do you know you need to invest in 20 companies over two years, do they know that? And only two or three may turn out to be positive investments.”

Formerly a capital markets lawyer and investment banker at Lehmann Brothers in London, she turned her focus to early-stage company investment as an “angel” investor before starting Jelix after seeing “too many good ideas go unfunded”.

Based out of Sydney’s Stone and Chalk fintech hub, it focuses on early-stage companies with investment from high-net worths and sophisticated investors and looks at as many as 400 companies a year. “I feel very passionate about the sector,” she says. “It’s critical, and I feel as though my way of getting that funding is in that sophisticated area.”

Chris Gilbert, chief executive of equity crowdfunding platform Equitise, says investing in the concept of disruption depends on “what type of investor you are”. “But through platforms like ours, and changes in regulation, we can now accept anyone who wants to invest in that area,” he says.

The company also works through a syndicate model where venture capitalists and angel investors combine with other investors to back early-stage companies with a focus, generally, on disruptive technology.

And on the back of changes to crowd-sourced equity funding legislation in September 2017, the company is now offering investors access to IPOs they may not have otherwise been able to take part in.

He says the trends of disruptive technology have been widespread, listing businesses in marijuana, virtual reality and artificial intelligence as key early-stage trends.

“And rather than go into this space alone, our model is more specific. We more tell people what is coming – we pick businesses that customers that would find interesting,” he says. “And stuff that we think that would be a bad business – we put up the warning signs.”

According to angel investor Jemma Enright, there is however no easy code to opening the door to early-stage disruption.

“It all depends on how engaged you want to be in the process,” she says. “That leads to the decision-making on how you do it.”

Ms Enright, an entrepreneur whose early-stage personal finance business MoneyBrilliant was acquired by AMP’s New Ventures in 2016, is now part of a group of Sydney angel investors who co-invest in various opportunities.

The concept sees a conglomerate of like-minded investors willing to front anywhere from $10,000 to $100,000 – with an expectation of about $25,000 per annum – who in turn create syndicates investing in certain areas or certain companies.

“Many angels like to get their hands dirty,” she says. “You don’t have to have super-deep pockets to invest, but you have to be prepared to get into it and volunteer beyond just the capital investment.”

She says the syndicates of 20 to 25 people may have specific areas where they would like to invest, say, for example in Artificial Intelligence, and focus on that area.

There is an application process for start-ups that are seeking to come into the community.

“The interest from investors from all walks of life is growing. The (new federal government) regulation has made it far more attractive. We have gone through the conversation around disruption and innovation and, for me, it’s never been a better time to do it.”

At the end of the day, Tony Grist says disruption is actually quite simple – and is creating exciting times for investors.

“The evolution of the internet as a platform – and digital distribution – allows disruption to happen so much quicker," Mr Grist said.

“The internet had been an enabler and this word disruption is the brand that's been put on it.

“And for me it’s pretty simple: the more you put the flag up saying I want new opportunities, I want to see disruption, the more you do it and the more you become known for it.”


The views expressed are those of the author and do not necessarily reflect those of the Westpac Group. This article is general commentary and it is not intended as financial advice and should not be relied upon as such.