The Westpac-Melbourne Institute Index of Consumer Sentiment fell a further 3 per cent in July to 83.8 - the seventh consecutive monthly decline - as the impact from higher interest rates and surging inflation took its toll on households.

So from a confidence perspective, consumers face quite a confronting period at the moment.

Last month we talked about inflation being the key area of concern and I believe that’s still the case. But interest rate worries are also starting to build amongst consumers.

The survey sample was taken over four days, with the Reserve Bank’s July rate hike coming on the second day of the sample period. Sentiment amongst those polled after the decision was around 7 per cent below that of those surveyed prior. That compares with a differential of just 2 per cent in June.

We now have 73 per cent of people expecting rates to go up by more than one percentage point over the next twelve months, up from about 65 per cent in June. 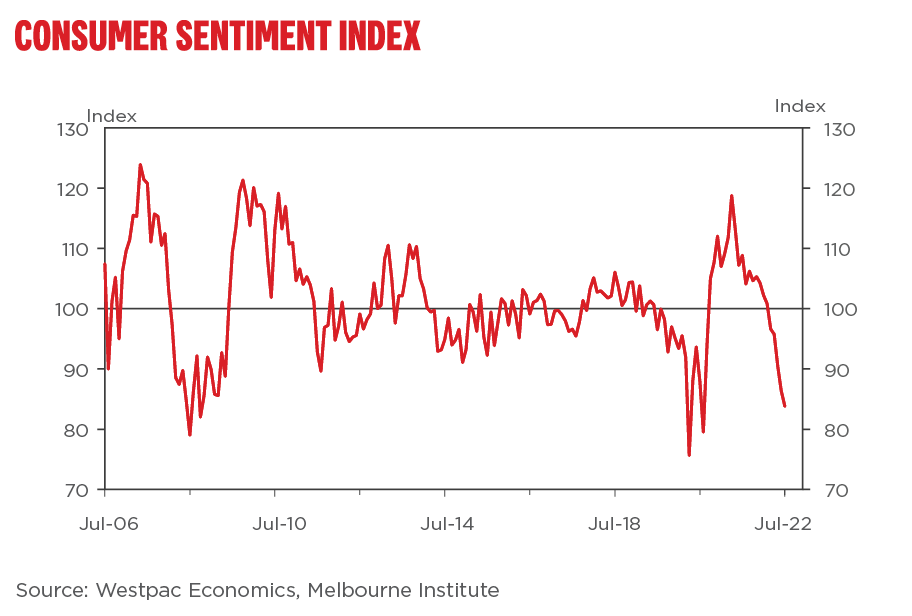 The other big news was around the housing market. We saw another 5.6 per cent fall in our index of house price expectations. The nationwide index now stands close to 105, but is below 100 in New South Wales and Victoria, which means that more people in those states expect prices to fall rather than rise.

It’s likely those indexes have a fair way to fall yet, because if we look at the last significant housing market sell-off in 2018–19 the NSW index bottomed out at 68.7 while the Victorian index hit a low of 71.7.

So what does all this mean for interest rates? We believe the bank will go for another 50 basis point increase in August - that will be the third one in a row. But after that we expect a pause. We think the right policy is to draw breath, look at the 175 basis points of hikes they’ve done - a record rapid tightening - look at what the sentiment indexes are telling them and wait a little while before we see the next inflation report.

That will require another hike, but we favour a pause in September and October, before the Bank raises rates again in November and December, and follows up with another increase early next year. We would see the peak in rates as being 2.6 per cent.

BILL'S BITES: RBA set for another 50bps lift in July