BT already had a market-leading wealth management platform when it decided a decade ago to re-imagine it for the mobile era.

It’s that entrepreneurial spirit that Richard Holmes, the group’s chief information officer, believes sets the group up for success as it prepares for life outside the Westpac Group.

“We made the decision back in 2012 that digital mobile was going to be critical to the success of the platform,” Holmes, whose career at BT spans more than two decades, tells Westpac Wire. The multi-million dollar reboot that followed created the Panorama platform, which has grown its funds under administration to more than $100 billion since launching in 2014, accompanied by an award-winning mobile app that has transformed the user experience.

Fast-forward to 2022 and Holmes has his sights set on further technological advances to help Panorama maintain its dominant position and meet growing competition from the likes of listed competitors such as Netwealth and Hub24.

Application Programming Interface is the intermediary software that allows different technologies to talk to each other. It’s a key focus for Holmes’ team as they look to embed Panorama into financial planners’ broader workflows.

“The shift is going to be away from a single platform into a broader ecosystem, somewhat like what Apple have done and how Google has become infused in everything,” says Holmes.

“What’s going to be important to ensure that financial advisers can continue to deliver high quality advice to as many clients as they can is enabling that ecosystem and the tools that they use in a seamless way. So we’re going to need to somewhat expose ourselves, securely and scalably, through APIs to other technologies.”

Data analytics and insight is another growth area. Holmes says BT can be more pro-active in using its rich seams of data to help advisers better serve their clients. 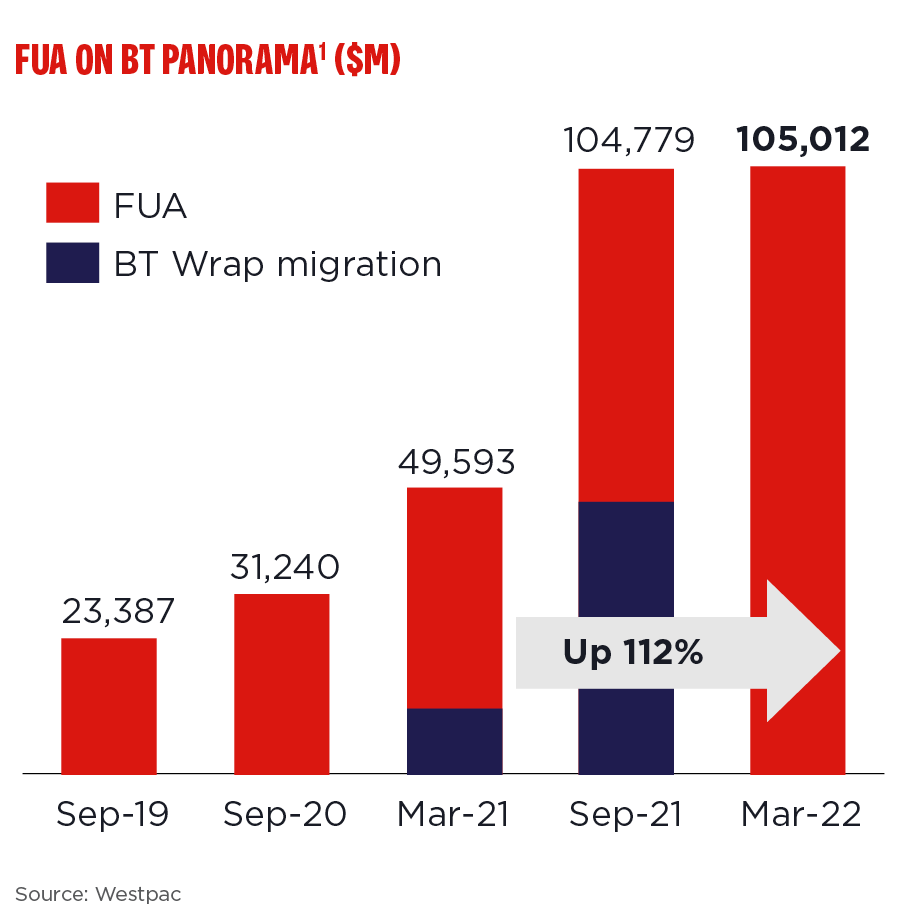 In the past year, BT has successfully rolled out ‘Blue’, a chatbot which answers online questions from advisers and customers. Blue resolved more than 27,000 queries over the March quarter and is now being added to the mobile app.

The BT team is also focused on enabling more advisers to use digital consent, allowing them to do transactions online on behalf of their clients. Almost 60 per cent of advisers using Panorama are now set up for this function, marking a fivefold increase since the start of the year.

“We will continue to enhance our capabilities online, to help our advisers and clients to self-serve whenever they choose,” Holmes says. “It’s also about ensuring that as many transactions as possible go straight through and are highly automated.”

Still, it’s not all been plain sailing. Last August, BT was hit by a major technical outage which locked users out of Panorama for a week. The outage came just weeks after BT completed the migration of BT Wrap customers to the platform.

Holmes acknowledges it was a difficult time, but said the experience offered some important lessons. Hundreds of system enhancements and upgrades have been made since then to improve resilience, he says.

For keen surfer Holmes, riding the wave of technological change is what continues to energize him in his day job, and he’s confident BT can continue to adapt and thrive under new ownership.

“Westpac backed that bold call to invest and transform and launch Panorama. But they made a decision to focus on the core banking business and hence BT is now going through a sales process,” he says.

“I’m excited about the future. Strategically, I think we’re going to end up in a more focused wealth management organisation and that’s great for BT, it’s great for our advisers and ultimately their clients as well.”