The leaks are flowing, the political jostling intensifying and the anticipation rising.

As always, some have already been locked in after pre-announcements – families with multiple children in childcare are set to win from the government’s newly minted $1.7 billion plan, along with the elderly from the $2.5bn allotted to aged care.

Westpac chief economist Bill Evans says women and industries still impacted by COVID-19 restrictions, such as tourism and education, are also set to benefit when Treasurer Josh Frydenberg hands down the government’s most important annual economic document on Tuesday night.

The “losers”? There’ll naturally be some.

But with the Treasurer assuring no “sharp pivots towards austerity”, perhaps fewer cohorts will feel hard done by than usual.

And stepping back, all taxpayers are set to win from what Evans describes as the “extraordinary” improvement in deficit and debt thanks to the economy’s roaring recovery and soaring iron ore prices. 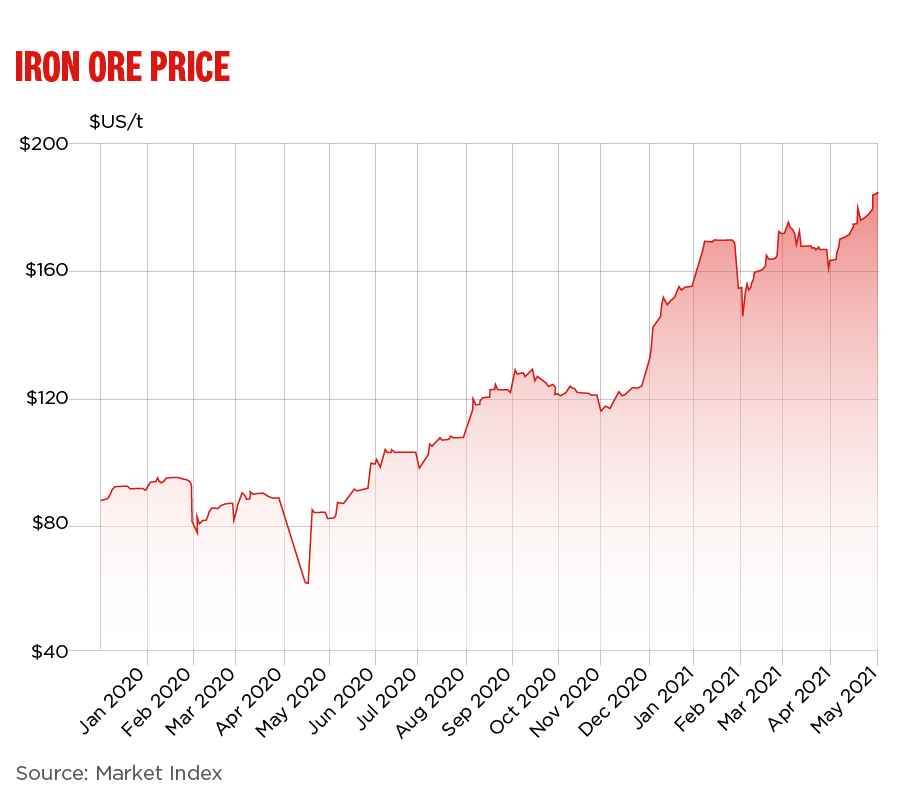 For 2020-21, he expects the deficit will come in at $155bn – or more than $40bn better than tipped in December’s Mid-Year Economic and Fiscal Outlook. Others, such as forecasters at UBS, think it could be even better, printing at $148bn.

Either way, the task of repaying the billions of dollars racked up to offset the economic pain of COVID-19 will be a little easier, Westpac Economics expecting net debt to moderate to $731bn in 2021-22, some $67bn lower than in MYEFO. 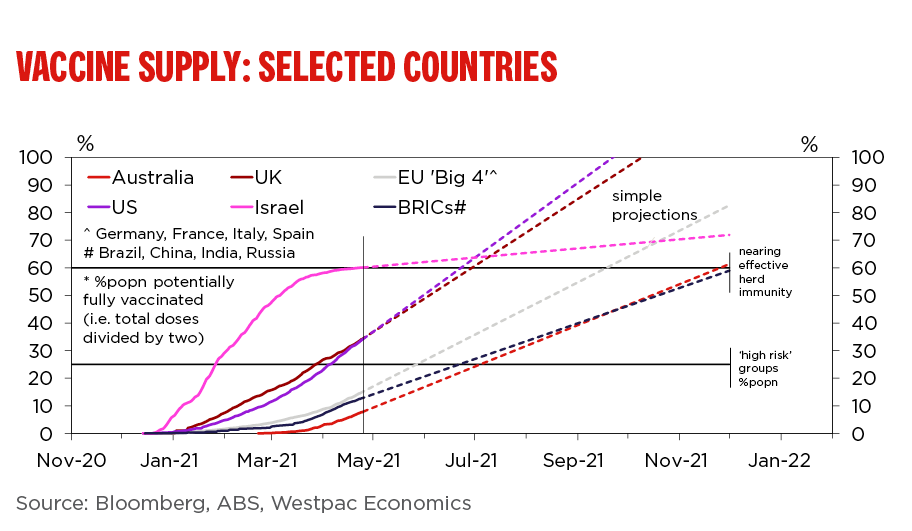 Evans says it’s clear the budget strategy is to “go for growth” and generate more jobs to achieve the goal of getting the unemployment rate – which has slid to a far better than expected 5.6 per cent – down to 4.5 per cent over time.

“The budget position and the outlook for the budget have improved markedly,” Evans says in his budget preview, acknowledging Australia’s economic and health “miracle” in the past year following massive government and RBA support.

“Over the whole budget period out to 2024-25 we expect the underlying fiscal position will have improved from deficits totalling $511.6bn in MYEFO to $400bn, including an estimated $62bn in new policy measures.”

But despite the remarkable turnaround in budget fortunes, Evans laments that the government appears likely to squander the opportunity to accelerate tax reform by bringing forward “stage three” of their personal income tax cut plan.

Speculation has instead centred on the Low and Middle Income Tax Offset (LMITO) being extended for another year. But Evans says this would result in another round of “double compensation”, given the policy was originally introduced to compensate taxpayers earning up to $125,000 before stage two of the tax cuts came in, but these were accelerated to 2020-21 and the LMITO extended amid the pandemic.

He argues another extension is not tax reform and that bringing forward stage three would create a “simpler, more competitive and aspirational tax system”. It is also a “sensible and affordable strategy” to support growth and full employment, he says, putting the net cost at around $10bn if the LMITO was also not continued.

“In extending the LMITO for a third year the government will be missing the opportunity to bring forward tax reform,” he says, noting it will result in four years of no tax reform being delivered. “The reforms to childcare that will be announced in the budget are aimed at improving participation in the labour market – lower tax rates also boost participation while increasing disposable incomes and spending power.”

Morgan Stanley strategist Chris Nicol agrees the government is unlikely to accelerate stage three. But with a reduction in tax relief looming in 2023 as the stage one tax rebates roll off, he says the government may “address” this with some tax tweaks without touching stage three.

Indeed, Nicol believes this budget will be closely watched by consumers.

He says the “political and economic incentives” are strong enough to see around $50bn in discretionary spending announced over the forward estimates, but warns that households shouldn’t expect the same support as in last year’s crisis-orientated budget following the strong gains across the labour market. Remarkably, total employment is above pre-COVID levels. 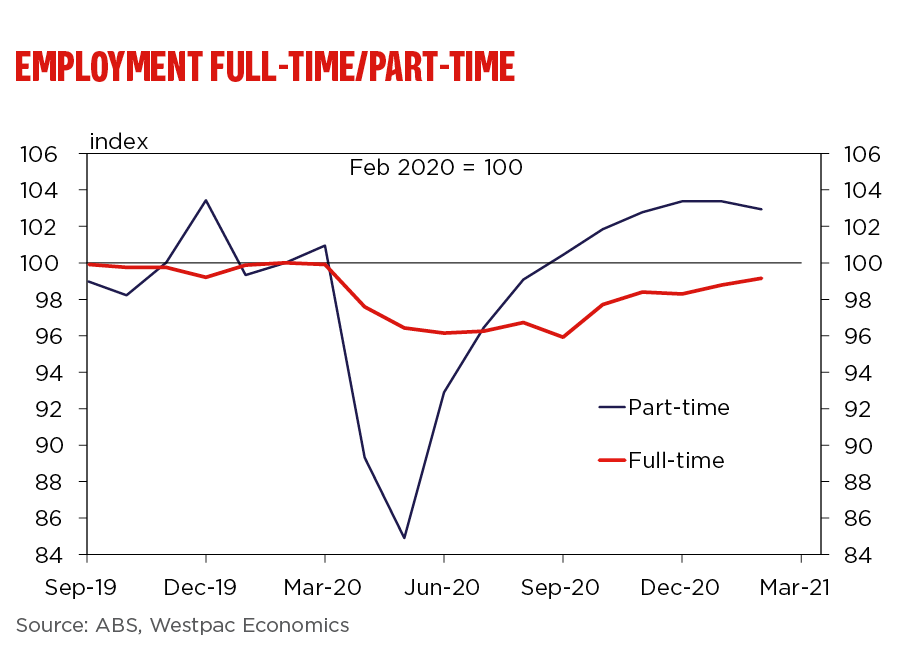 “Despite Australia's significant outperformance on economic and health outcomes over 2020 relative to most other countries, the federal government's polling numbers have declined over the past six months and recent polls show it trails the opposition on a two-party preferred basis – which likely further increases voter focus on what the budget means for them,” he says.

As for Evans, he expects an even larger spending cash splash of around $62bn over coming years, or $20bn in 2021-22, a further $20bn-odd the year after and around $11bn in each of the two following years.

And with the RBA having indicated unemployment needs to fall to 4 per cent, or even below, before igniting wages growth and inflation, the government’s spending beyond aged care, women and COVID relief are tipped to have a familiar ring to it: jobs and growth.

“The $20bn package of spending measures in 2021-22 will likely include a range of other initiatives spanning a broad spectrum of issues – with a particular focus on jobs and more jobs,” Evans says.

“This may include: families, small business incentives, education and training, skills creation, health care, the NDIS, climate change and energy policies, defence, infrastructure, as well as addressing the issue of housing affordability through social housing and rent assistance.”