Buckle up for a bumpy ride

As the dust settles on the second final presidential debate, considerable uncertainty remains ahead of the November 3 election.

The political turbulence of the past few weeks has been stunning, even by the standards of the Trump administration.

The death of Supreme Court Justice Ruth Bader Ginsburg on 18 September, President Trump’s revelation he’d contracted COVID-19 on 2 October, and all the daily high-drama in-between. While markets were braced for congressional disputes over fiscal stimulus, COVID-19 flare-ups (or improvements) and the debates, they could not have been prepared for Trump’s diagnosis and the emergence of Judge Amy Coney Barrett as the nominee for the Supreme Court.

As such, markets remain on edge – and last week’s second debate did little to change this amid a range of scenarios once the votes are in.

While the public fascination is understandably with the presidential race, it is the composition of Congress that will be vital for markets. Why? Because if there’s a "blue tide" of Democratic control of the White House and Congress – as the polls suggest – it would enable a Biden administration considerable freedom to pursue its policy agenda.

With COVID-19 wreaking havoc on economies around the world, the outcome of the presidential election and the composition of Congress will have material implications for US fiscal policy, the economic outlook and global markets.

The Democrats already hold the House after winning it back in 2018 by a substantial margin and retaining control seems extremely likely; The Economist estimates 99 per cent chance.

The main question then becomes the Senate, which the Republicans have controlled since 2015 and which overweights the votes of rural residents. The Economist rates the chances of the Democrats winning back the Senate around 75 per cent, betting market PredictIt about 65 per cent.

Still, prediction markets and polls suggest a blue tide is the most likely outcome.

Markets were initially cool on a Biden presidency, wary about proposals for higher taxes, but have increasingly embraced the prospects for large spending increases under a Democratic sweep. 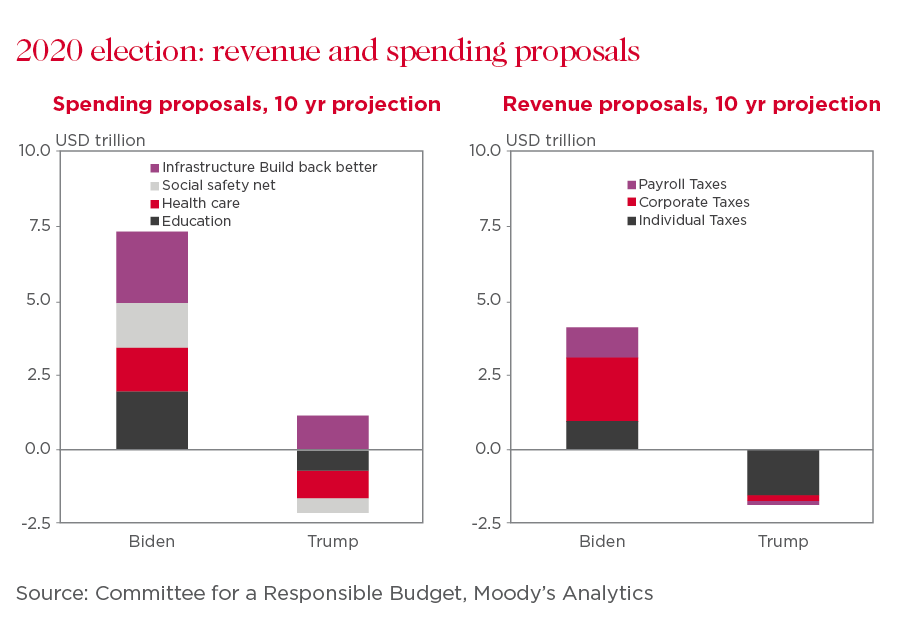 Markets have been fervently awaiting details of the so-called Cares 2 stimulus package, with the democrats pushing for greater support. In contrast, a re-elected Trump, a Republican Senate, or both, imply continued low taxes, but – more importantly for markets – much less stimulus out of Cares 2, but also likely in the years to come.

Given the bookies give Trump and a Republican Senate little chance, a status quo outcome would make for a much bigger market surprise, but the reaction is likely to be very different and less upbeat than to Trump’s surprise win in 2016. Republicans favour less COVID support and there is next to no chance their tax stimulus proposals will make it through a Democratic-led House.

It must be remembered that a key one – a disputed election – remains non-negligible despite Biden's strong polling. If Biden is unable to claim a decisive win on election night, the focus will turn to the flood of mail-in-ballots, which probably break very heavily in Biden’s favour. As such, Trump is likely to challenge their validity.

In this event, a material decline in asset prices is highly possible. Remember, the S&P500 stockmarket index fell more than 8 per cent during the 2000 Bush-Gore Florida recount between 7 Nov and 15 December, albeit as the tech bust played out.

Whatever scenario plays out, the next few weeks are unlikely to be without a few bumps along the way.

Sean analyses the key factors driving the Australian dollar and other G10 currencies. He spent three years in Westpac’s Singapore office before moving to Australia in 2008. Prior to joining Westpac, Sean spent seven years in New York and London as a senior currency strategist and has also been a financial markets economist in Melbourne. He has a Bachelor of Economics degree (with Honours) from Monash University.