The COVID–19 pandemic represents a singular event that is unlike any shocks or cycles we have encountered since most macroeconomic measures were developed last century.

This, along with the nature and speed of the shock (Australia went from a few dozen cases to several thousand and a full-scale lock down in less than three weeks), meant we developed a different approach to assessing its economic impacts.

What it shows is that despite positive recent news around containment of COVID-19 locally, a near term recession remains assured following a deep contraction in the first half.

While the second half will see a rebound as restrictions across the economy are relaxed, the net effect is GDP declining 5 per cent in 2020 and an unemployment rate of 8 per cent by the end of the year (versus a mid–year peak of 9 per cent and a starting point of 5.2 per cent).

However, unlike previous recessions and the GFC, the main channels through which the COVID shock is impacting the housing market are indirect – via household incomes, employment, confidence and migration flows. It was also not preceded by a monetary tightening cycle, or rising interest rates, and the starting point for housing was relatively subdued, with dwelling investment soft, turnover muted and prices still coming back from a material adjustment in 2017–18.

Put another way: whereas property has usually been at or near the front line of cycles in the past, this time around it’s ‘collateral damage’. That said, the impact is still set to be large and a few things stand out this time around.

For one, households are entering this recession with high debt levels, which constrains the extent to which a rise in leverage can support housing going forward and may lead to households deleveraging.

Also, the nature of this shock – being a health emergency – has led to border closures, in turn reducing population growth going forward. We expect net overseas migration to roughly halve over the next year from around 240,000 a year to 110,000 a year, slightly milder than the Government’s formal view due to potential mitigating factors such as Australia’s performance in containing the Coronavirus outbreak and foreign students perhaps being allowed to enter the country subject to quarantining.

On the flip side, high unemployment may lead to policy changes that reduce permanent and other migrants. Either way, slower net migration will lower annual population growth to 1 per cent, down from around 1.5 per cent in recent years. That means slower growth in underlying physical demand for new dwellings.

All in all, while every economic shock has its own specific features, the bottom line is that housing weakness looks likely to be similar to past recessions with some risks on either side.

As to the perennial question of where prices are headed, it’s a mixed but, unfortunately, mostly sombre story.

Here, sentiment among investors and affordability are key. 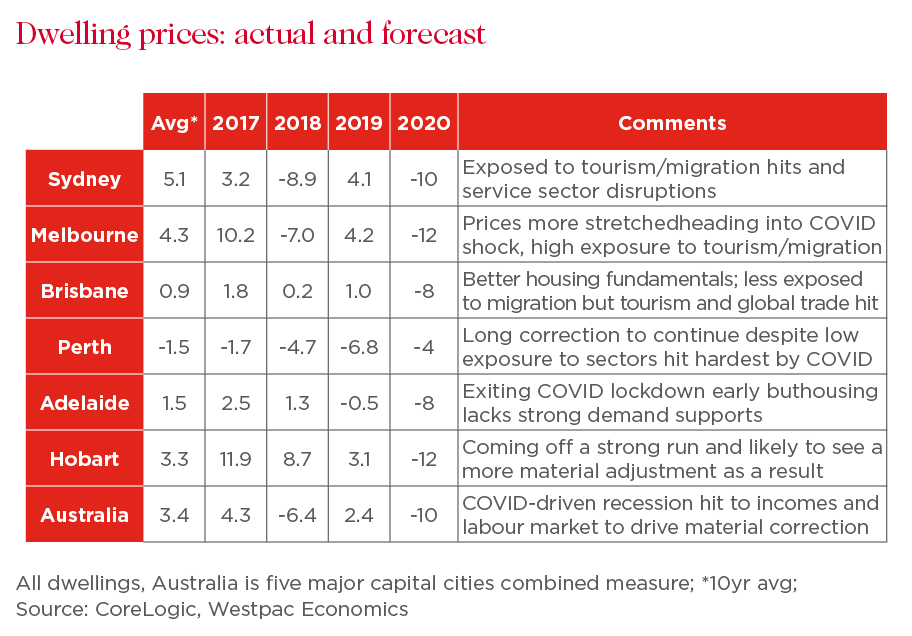 On the latter, interest rates may be at record lows but they also have no scope to move lower with the RBA’s cash rate target of 0.25 per cent at the effective ‘lower bound’, and the Bank indicating negative rates do more harm than good.

As such, most of the improvement in affordability – which while not looking stretched nationally is well above long run averages – must come from lower prices rather than lower interest rates, given income growth is likely to remain weak.

Our estimates suggest a 10 per cent fall in capital city prices should provide enough of an affordability improvement to start supporting demand, comparable to the correction during the GFC.

In terms of investors, confidence was already poor heading into COVID-19 and is likely to remain so as prices adjust, reinforcing price weakness which could easily extend well into 2021 as a result.

In April, The Westpac–MI Consumer House Price Expectations Index recorded an extreme 50.8 per cent drop before barely lifting this month, sitting around the weakest levels of the GFC, when prices eased around 10 per cent.

We expect these expectations may again be proved correct in the COVID-19 downturn.