Flybits, which was founded in Toronto in 2013, believes banks are stuck in a pattern of “franken-stacking”, cobbling together hardware and software solutions built or acquired over the years which ultimately impacts engagement with customers and security. It claims other options to solve the issues, such as incumbent software as a service companies and personal financial management tools, fall short through one-size-fits-all approaches with “frozen” data sets or lack of scale.

“Customers are already used to seeing content and recommendations based on their behavior,” said Hossein Rahnama, Flybits’ founder and chief executive. “Netflix and Amazon use just a handful of customer data points for their recommendation engines. But Flybits leverages an unlimited amount to create far more personalised and relevant recommendations than ever before.”

The company’s machine learning technology works by assembling various proprietary data – such as customers bank account usage and length of relationship – and combining it with external “contextual” data, like propensity to consume or location, into one ecosystem. Clients then use Flybits’ “experience studio” and “concierge” to access contextually-enriched data, define customer segments and send timely “nudges” with relevant offers or tips.

To further develop the technology, Flybits today unveiled a fresh $US35m injection via a Series C round led by Point72 Ventures, plus investments from Mastercard, Citi Ventures and Reinventure – a venture capital firm in which Westpac is the majority investor – and existing partners.

The funds are slated for global expansion, commercialising AI and machine learning patents and developing a marketplace for large banks, fintechs and others to create new services.

The deal marks Reinventure’s first in Canada and latest out its third fund. Reinventure’s Rohen Sood said the firm was drawn to Flybits’ potential to better utilise banking apps by creating a more personalised experience through data that goes beyond banking and becomes a broader lifestyle tool.

“One of their major customers used the capability to provide public transport data notifications to help customers avoid delayed buses and trains on their individual routes,” he told Westpac Wire. “Although this does not link to a direct revenue uplift for the bank it builds engagement and trust.”

Like many companies, banks are increasingly prioritising data and technology as consumer expectations rise and competition grows amid a more challenged growth and external environment that is driving notable industry change. While having and generating more information than ever before, banks “struggle to join the dots internally and prepare bank-wide views of a customer relationship, let alone integrate external sources of data”, leading to decisions “at the product level, not at the customer level”, according to PwC. 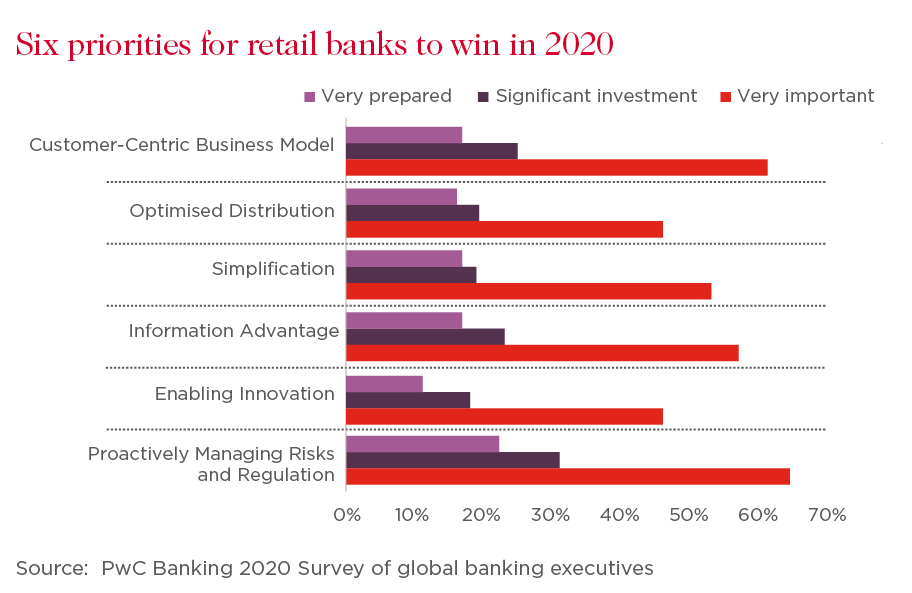 The key, the consultancy said, was moving from enhanced usage of data and analysis for more targeted customer offerings to increased partnering and developing of “sophisticated” customer profiles.

“The winners of 2020 will develop a much deeper, holistic understanding of their customers,” PwC said in its “Retail Banking 2020 Evolution or Revolution?” report, which found enhancing customer service was the number one investment priority for banks globally.

“They will need to acquire, integrate and analyse multiple sources of internal and external data. They will be able to understand their customers’ needs, and be present with a relevant solution at the time of need.”