Westpac chief executive Brian Hartzer says the bank is zeroing in on efficiency gains from collapsing duplicated systems across the group derived from the St.George merger, helping offset more difficult conditions across the industry.

Reporting flat full-year cash earnings today, Mr Hartzer told Westpac Wire that with revenue under pressure there was a need to focus on costs and a key focus was the “modernisation, simplification and automation” of underlying platforms and technology.

“That’s going to, as we collapse the old St.George systems and the Westpac systems into one which will happen progressively over the next few years…lower the cost of running,” he said. “(But) very importantly though, it’s going to lower the cost to make changes.

“I think given we’re already quite efficient, the benefit of getting those systems modernised is going to give us a huge advantage on cost over the medium term.”

Echoing other banks in recently reported results, Mr Hartzer said it had been a difficult year amid tough operating conditions for the industry, including higher regulatory and compliance costs, increased funding costs, and heightened competition. Slowing housing credit growth is also weighing on the industry’s revenue, putting additional pressure on banks to focus on costs at a time when they have to maintain investment in operations, particularly technology, risk mitigation and restructuring.

Westpac last year invested more than $800 million in system upgrades, digital transformation, and innovation; out of a total investment spend of $1.4 billion.

But given the tougher environment, Mr Hartzer said the bank had lifted its productivity savings target to $400 million, from $304 million last year, which was up 16 per cent.

For the year to September 30, Westpac’s cash earnings of $8.1 billion were little changed on the prior year, weighed down by more challenging consumer banking conditions in the second half and $281 million, after tax, in provisions for estimated customer refunds and related costs, and legal costs relating to the royal commission.

Mr Hartzer said despite having more work to do dealing with known issues and the industry-wide challenges, the bank’s “service-led strategy remains the best way to create value”. 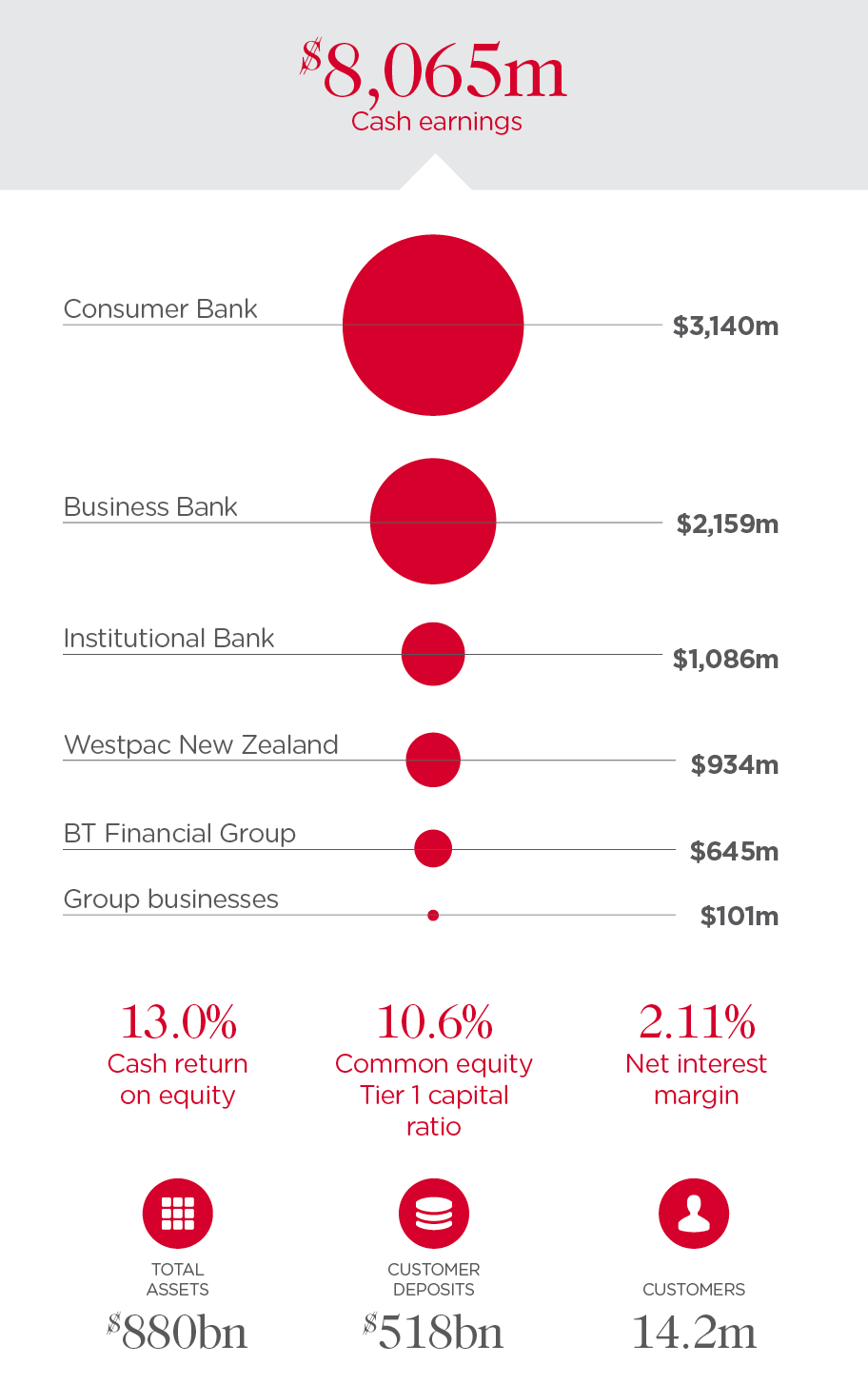 While the outlook for the jobs market and the Australian economy overall remained positive, he said GDP growth was likely to slow in 2019 to around 2.7 per cent amid consumer caution in the face of flat wages growth, a softer housing market and uncertainty associated with the coming federal election.

But Mr Hartzer said first home buyer demand was holding up and that credit risks from the housing market remained “low”, with 70 per cent of Australian customers ahead on their repayments – including offset account balances – and 90-day delinquencies holding at a low level. 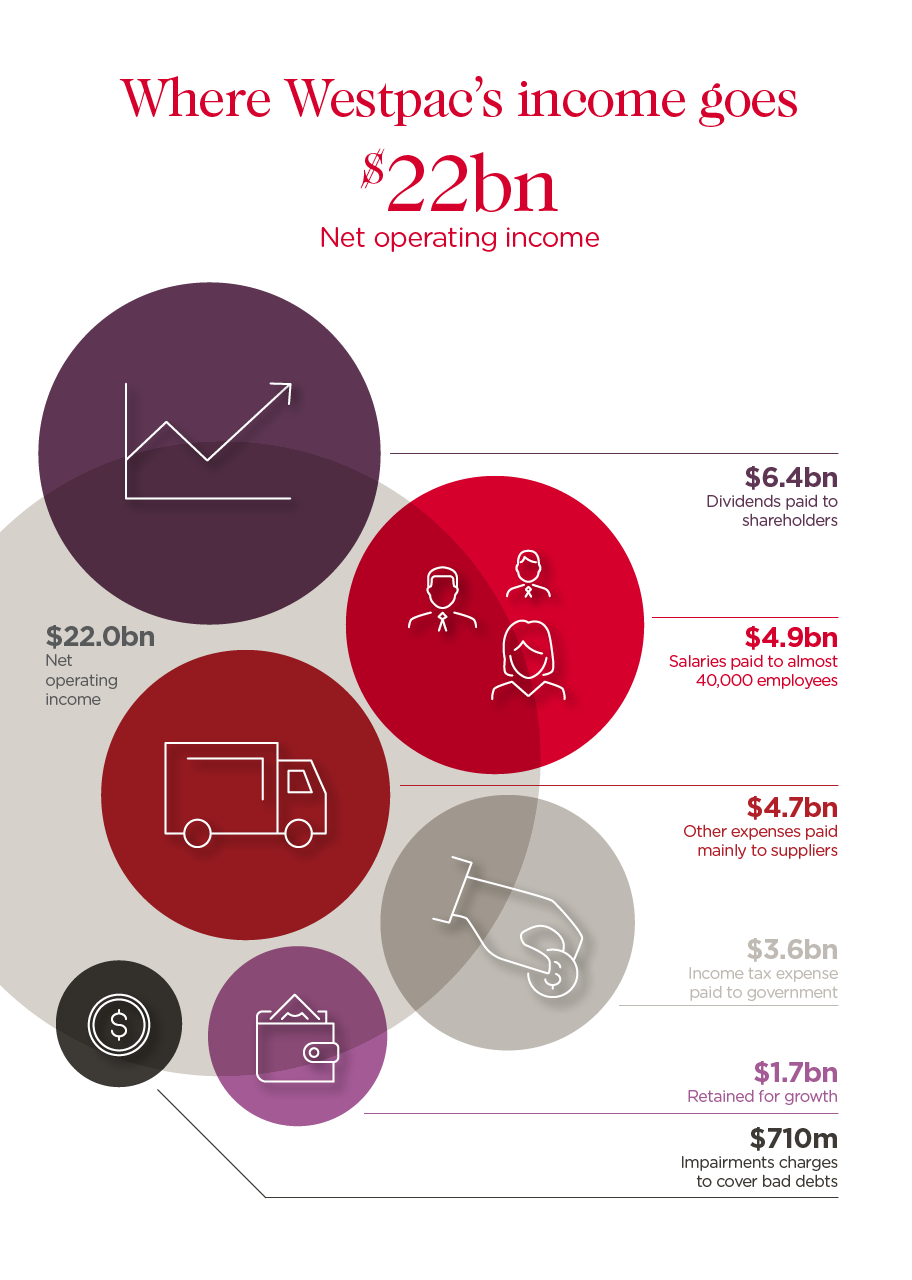 Globally, Mr Hartzer said growth was slowing in Europe and many emerging markets while the US-China trade war would weigh on the latter’s economy. “However as the Chinese economy tilts towards services, Australian exports of education and tourism will continue to prosper,” he said.

The bank’s common equity tier one capital ratio increased to 10.6 per cent, above APRA’s unquestionably strong benchmark that the major banks have to meet in 2020, while the final, fully franked dividend was unchanged at 94 cents per share.

Cash return on equity eased to 13 per cent, the lower end of the 13-14 per cent target range.