Raising the bar with data

Just over a year ago, Aidan Morrison was musing in his bar about how much easier and cost effective it would be if he could accurately predict how many customers would walk through the door.

“There are always lulls and rushes, big weeks and bad weeks, and everyone in the industry always says, ‘you just can't tell’,” he says of Bat Country, the Hunter S. Thompson inspired bar he opened in 2013. “There’s almost a pride among us that we can deal with whatever unpredictability comes our way.”

“I was sure there'd be something in the data that would be better than just putting your finger in the air,” says Morrison.

Fast forward to today and the pair have created Trendlock, a start-up that recently took part in Westpac’s FuelD program, Australia’s first ever “data accelerator”, where eight companies were given unprecedented access to anonymous, aggregated transaction-level data, along with hosting infrastructure and professional advice, to rapidly advance their ideas.

The program comes as the Australian government readies the rollout of the new “open banking” regime, a major development which will allow customers to direct their bank to share their data with third parties, leading to customer data flowing more freely across the economy.

FuelD participants were able to test and refine their concepts by experimenting with anonymised data through Data Republic – the data marketplace which allows organisations to store, exchange and collaborate on aggregated data projects in a secure environment. They also took part in workshops covering everything from best practice data governance through to business development and marketing skills, as part of efforts to help them build scale and customer distribution.

Jade Clarke, Director of Data Innovation at Westpac, says FuelD was put in place to test what’s possible in the burgeoning data landscape.

“We're at the very beginning stages of the formation of a data industry in Australia, and open banking, and open data across the economy more broadly, will help accelerate the industry’s development,” she says. “No-one really knows the full potential of opportunities that may be realised, but we do know that for organisations to remain competitive and succeed in this new world it’s a race towards service based on data enrichment, personalisation and empowering consumers.”

Clarke says what’s emerging is the ability for better use of data to solve “old-world business problems with next generation actionable insights”, noting the many diverse concepts at different stages of development being tested through the 12-week FuelD program.

“We had one team who was already working with CSIRO on a well-advanced platform to give the agriculture sector a new way of estimating the risk, sustainability, productivity and value of rural properties. We had others creating brand new tools to make it easier for homebuyers to make purchasing decisions,” she says. 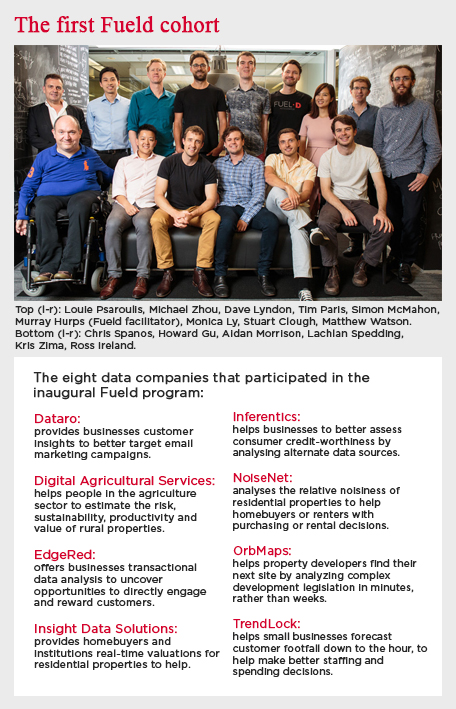 NoiseNet, for example, uses technology to help homebuyers and renters check whether a property has a noise problem by rapidly analysing a range of different data sets within a kilometre radius and providing a world-first “noise rating”.

Founder Stuart Clough, an engineer who worked in industrial mining for more than 25 years, says that like a pest inspection, NoiseNet can inform home buying decisions given most people spend less than three hours inspecting a property and only at the times suggested by real estate agents.

NoiseNet’s technology – which is expected to be rolled out nationally after last month launching in Brisbane – consolidates everything with a “noise signature” at different times of day, from how hilly it is to traffic volumes, flight data and schools.

“Intrusive noise can be a massive issue for people in their new home. I know it’s been an issue for me plenty of times, which is why I gave up my engineering career last year to start working on this idea full time,” Clough says.

The benefit of participating in the FuelD accelerator program was crystallising the value proposition of NoiseNet and identifying new income streams previously not considered, Clough says.

“We already had our consumer market worked out. We’d also worked on a business market, where we offer noise evidence to councils to help them resolve noise complaints quickly and with fewer resources,” he says. “But during the accelerator program we started the discussion about how we can prove the value of our data so we can sell it – to valuers, developers or banks.”

Commercialising data is also in the plans for Trendlock, says Morrison, after realising the power of the technology. It’s his dream to keep the cost of analytics low for small businesses by selling data insights to “the big end of town”, enabling him to offer a “freemium” model, where the base trend data is free for SMEs but users can upgrade to get more granular analysis.

“Trendlock can now let me tell you when Bat Country will fill up, which drinks will be most popular, and how many meals will be ordered. The potential power of that for small business owners who live or die by the hourly rise and fall of customer demand, is enormous,” he says.

“It makes it easier to figure out rosters and stock, but it can also help to quickly spot and address any kind of change in the underlying business that would previously have been unable to be detected. This is a golden opportunity to bring the power of good analysis to smaller businesses sensitive to the fluctuations of consumer demand, something that’s normally only in the realms of big corporates with huge data sets and teams of data scientists.”

Clarke says some of the concepts out of the FuelD program could be further developed in partnership with Westpac before the next cohort of start-ups begin in the second half of 2018. Under the terms agreed with participants, if any of the data companies successfully reach an agreed valuation cap, Westpac’s venture capital company Reinventure will end up with a small equity stake.