I saw a news headline last month that excitedly proclaimed Australia is running out of beef.

As inaccurate as it was, I’ve no doubt it caused mild panic to steak lovers the world over.

What is true – and likely to have led the author down this fanciful path – is that last year the size of Australia’s national cattle herd fell to its lowest level in two decades as graziers were forced to dramatically destock during the prolonged and severe drought in the three years leading to 2019.

Even at this low, the national herd was around 24 million and since then, seasonal conditions have thankfully improved with above-average summer rain in most of the country. As a result, restocking is underway and projections point to an annual increase in the national herd for at least the next three years.

So, there’s no chance we’ll run out of beef any time soon.

However, there are implications due to these seasonal dynamics, compounded by the effects of the COVID-19 pandemic.

In fact, it’s not a stretch to say many Australian beef producers are operating in uncharted territory.

One of the most notable upshots is the surge in cattle prices to record highs. The average price for young cattle recently surpassed $9 per kilogram, up more than $2 from a year ago, according to the benchmark Eastern Young Cattle Indicator.

Never have we seen such high cattle prices together with historically low interest rates. 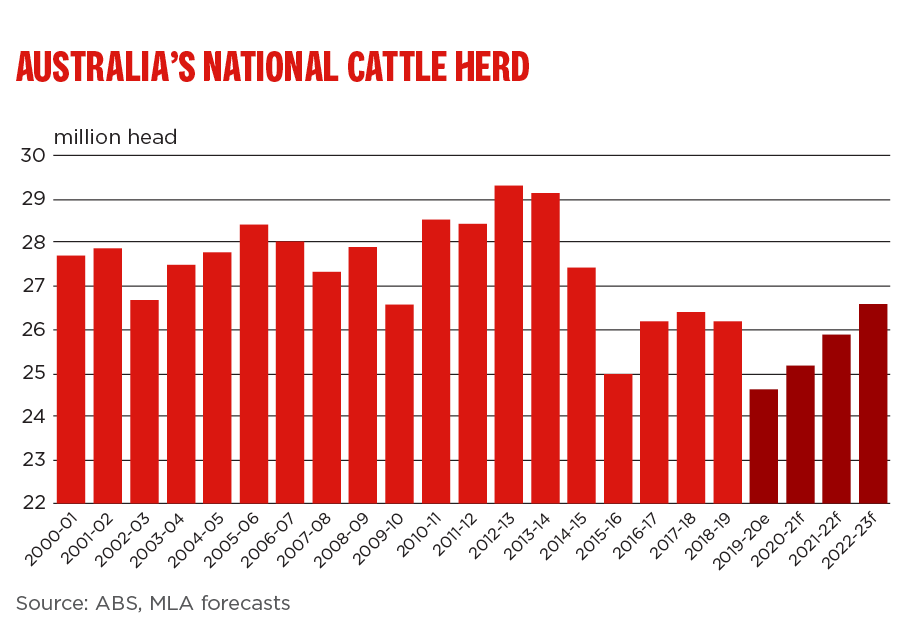 This price hike has been predominantly driven by the tightening of supply as producers hold onto their cattle – especially breeding stock – to rebuild herds.

It has also been buoyed by the logistic chains of other big exporting countries being disrupted during the pandemic, in turn delivering a competitive advantage to our industry, by being able to continue to supply red meat to the rest of the world (Australia exports around 70 per cent of its beef).

While you would need a crystal ball to predict how far and for how long cattle prices will rise, the ripple effects are already being felt through the whole industry – both positive and negative depending on your viewpoint.

Amongst some graziers, we are seeing them take advantage of higher prices to sell progeny and pay off debt incurred during the drought. This is contributing to a notable strengthening of our beef cattle producers' cash positions – and there are not many among this cohort who do not have a smile on their face.

On the flipside, those who had sold down cattle during the drought and are now trying to restock are finding it financially challenging and are instead turning to other ways in an attempt to benefit from the current market. An example of this is offering agistment to utilise their pasture for cash flow as they wait for cattle prices to stabilise or drop back.

But it is tougher still for those looking to enter the industry. This group face record cattle prices and escalating property prices, as they look to establish their beef enterprises.

Consumers may also be feeling the effects, as red meat price rises continue.

While this may cause some meat lovers to cut back or change their usual cuts, consumers can rest easy knowing that even if we have to pay a little bit more for it, Australian farmers produce the best quality beef in the world: it's clean and it's green – in my opinion, worth every cent.

There is no doubt the operating environment for these businesses is complex – including dealing with new challenges such as unexpected trade tensions with China and the ongoing effects of COVID on key export markets – topics I’ve no doubt will be hotly discussed during the coming week at Beef Australia 2021.

Having been involved in the cattle industry my whole life, I know those in the industry are accustomed to managing complexity and adapting to change – as were their predecessors.

That is why we have some of the world’s most reliable red meat producers, and we are in no danger of running out anytime soon.

Peta Ward is Regional General Manager for Westpac Agribusiness in Queensland, based in Toowoomba. She joined Westpac Agribusiness in 2007, following five years with ANZ, and leads a large team spanning regional and remote Queensland. Peta engages deeply with regional and rural communities, through professional representation at local and government levels and volunteering. As an advocate for the essential role of women in rural industries, she annually judges the AgriFutures Rural Women’s Awards, and she was the treasurer of the Rural Press Club in Queensland for three years. She has a Bachelor of Agricultural Science.