The month of January 2021 was an historical one for the US, marking an abrupt change in the prospects of the world’s biggest economy.

Politically, the curtain fell on the Trump administration’s historic four years in the White House and President Biden’s tenure began, complete with the balance of power in Congress after the Democrats claimed the final two Senate races in the Georgia runoffs.

Despite ongoing debate surrounding whether President Biden will succeed in passing his $US1.9 trillion stimulus bill in full, we expect that by the end of the March quarter the Democrats will get the bill through with limited changes. Through the middle of the year as the vaccine drive ramps up the remaining economic burden associated with COVID-19 should dissipate. Indeed, based on the current pace of the vaccine rollout, around three quarter of the population 16 and older could be fully vaccinated by early September, if not earlier – clearly good news.

For the economy, the net effect is expected to be annual GDP growth of almost 5 per cent in 2021, nearly three times our estimate of the US’s long-term potential output (1.75 per cent).

Such an outcome will be sorely needed.

While the published unemployment rate has fallen from 14.8 per cent to 6.3 per cent since April 2020, this does not take into consideration those that have stopped looking for work. As US FOMC chair Powell recently outlined, the real unemployment rate is more likely near 10 per cent, in line with the GFC peak.

This deficiency in the labour market is certainly not due to a lack of action by US policy makers, highlighting the degree of impact the virus can have on economies when it runs wild. 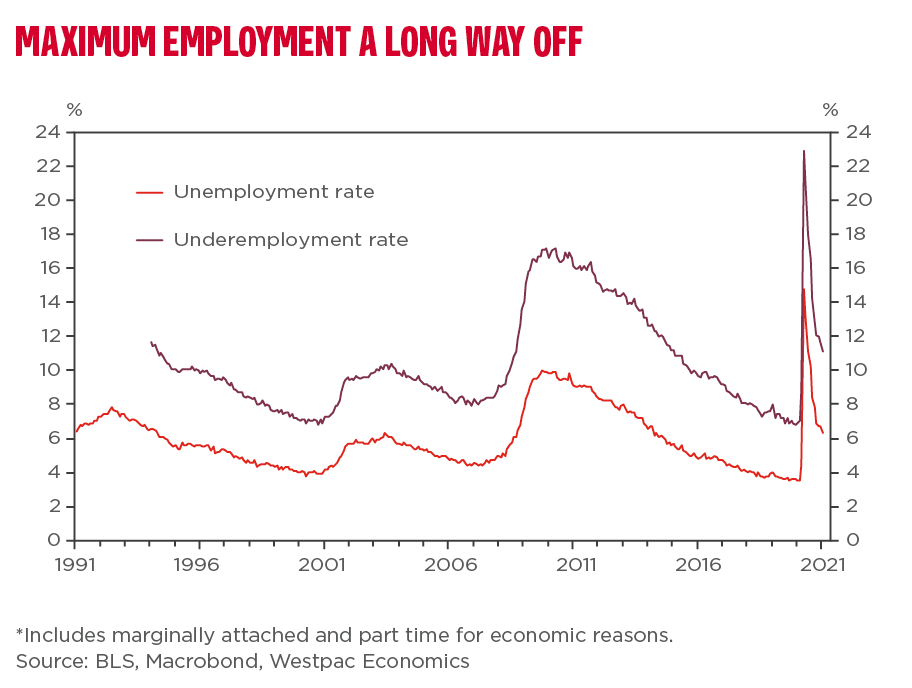 If passed in its original form, President Biden’s proposed $US1.9 trillion package would bring cumulative stimulus in 2020 and 2021 to more than $US5 trillion (23 per cent of GDP). In addition, the Federal Reserve has expanded its balance sheet through quantitative easing from 19 per cent of GDP to 35 per cent in 2020. We expect it to hit almost 50 per cent by the end of 2022.

But whereas 2020’s stimulus was required to protect households and small business while the economy could not function amid the worst of COVID-19, 2021’s aid should be understood as a critical catalyst to getting the mix of economic activity back to “normal”.

For household demand, this means encouraging consumption of services.

While lockdowns and restrictions led to a surge in spending on consumer goods such as cars, TVs, and computers, services spending collapsed in 2020 to be almost 7 per cent below its December 2019 level.

As such, it’s hoped giving eligible Americans another $1400 in cash as part of President Biden’s latest stimulus plan – along with increased and extended unemployment benefits – will this time around also stoke spending on eating out, leisure activities and other services, without an offsetting pull-back in goods spending.

The cash injection will also be important in suppressing concerns over rising interest rates.

The 10-year Treasury yield has already risen close to 65 basis points in the past few months and we expect a further 120 basis points rally by the end of 2022. This is important because the 30-year benchmark fixed mortgage rate will follow suit, increasing the cost of housing for new borrowers. But it’s likely that additional stimulus cash from the government and a rapidly improving labour market will support households looking to enter or expand their footprint in the housing market, even with higher interest rates.

Maintaining momentum in housing will not only support the economy through new construction, but also consumer spending on household items and via the improved confidence wealth accumulation brings.

This sentiment is also critical for business investment. 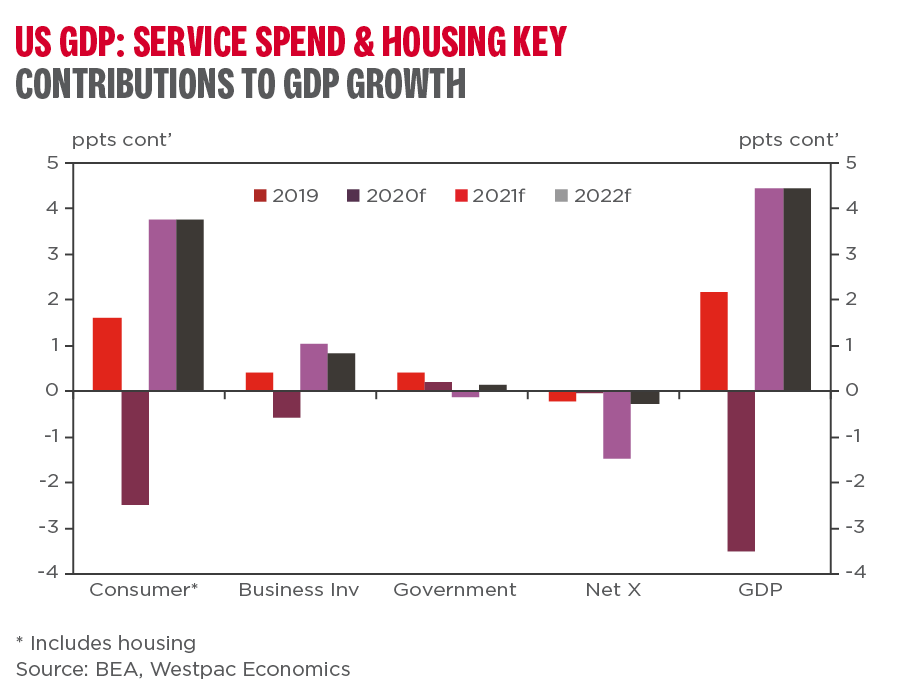 To see a sustained expansion in US productive capacity, firms must be confident in the domestic outlook and demand. This is particularly true at this juncture as the global recovery and more amicable trade relations with China and other nations under President Biden will likely encourage many US firms to invest offshore instead of at home in coming years.

If the above eventuates, downside risks to the economy for the Fed’s FOMC will dissipate during 2021 and 2022.

However, don’t expect an abrupt reaction.

A very modest tightening of policy in the form of a winding back of QE towards the end of 2022 is far more likely than any rate hikes. Like in Australia, the official overnight rate (the Federal funds rate) will remain unchanged for many years until full employment is achieved and inflation is at its 2 per cent target.

And although long-term bond rates have been rising, they are likely to remain historically low.

Given the impact this outlook has not only on US financial conditions, but those across the globe, risk assets such as equities, real estate and currencies like the Australian dollar should remain well supported as the COVID-19 recovery and the confidence it creates take hold.

The days of President Trump may be gone, but the focus on the US most definitely has not.