In March, retail sales jumped 8.5 per cent – more than one and a half times the next biggest move since monthly sales began being recorded in the 1960s, according to Westpac Economics. The month also saw the nation’s trade surplus hit levels not seen since records started in 1971 and business credit growth rise the most since January 1988.

Clearly, we’re in the age of economic record breaking.

But this week’s ordinarily upbeat numbers arrived at the same time as the economy is clearly sinking, creating feelings more akin to stumbling into the Twilight Zone than cause for cheers.

“Like the abnormally large tidal move that precedes a tsunami, the surprisingly strong March retail results should be viewed with great trepidation about what's to come,” Westpac senior economist Matthew Hassan warns.

While referring to Australians’ massive retail panic-driven splurge ahead of the shutdown of large swathes of the economy, the comment aptly goes to a key question on the minds of many – is the economic pain just getting started and life has changed for good, or does Australia’s swift suppression of COVID-19 mean things will quickly bounce back to “normal”?

As the federal government today outlined a staged winding back of restrictions, this tension has escalated into a tense battle on the stock market as investors jostle to price in the correct future. 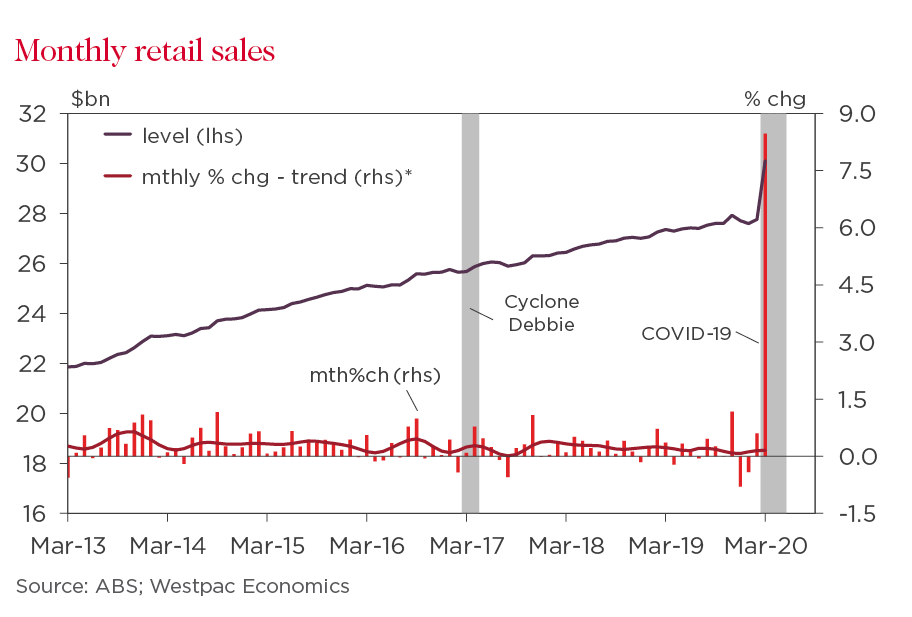 The “bulls” believe the worst of the virus has past as infections mostly peak around the world and governments reopen economies, with record fiscal and central bank stimulus to offset the economic drags.

The “bears” disagree, arguing stocks are overpriced for what economists predict will be the worst downturn since the Great Depression and the virus is getting worse in large countries like Brazil, India and Russia.

Even “mums and dads” have been getting more involved, the corporate regulator ASIC this week revealing a “substantial increase” in activity among retail participants, many of whom engaged in “short term trading strategies unsuccessfully” between February 24 and April 3.

“It was the best of times, it was the worst of times…. It was the epoch of belief, it was the epoch of incredulity. The opening lines of A Tale of Two Cities provide a fitting frame for the paradoxical state of global markets,” writes JPMorgan equity stategist Jason Steed about stockmarkets’ stunning April recovery despite the sinking global economy.

Since then, stocks have held up, suggesting the bulls are winning the battle on who is right about a fairly good, quick “V” shaped recovery, or a more prolonged “U” or “L” one.

And a lot still rests on the virus, the risk of further outbreaks and how much damage shutdowns to suppress it have already done to real businesses and consumers, many of whom are carrying high debt levels and/or haven’t experienced a recession. The Australian Banking Association today said banks had already deferred 643,000 loans worth at least $200 billion, while the Reserve Bank reiterated the economy would contract around 10 per cent in the first half of 2020, a slump not seen since the 1930s Great Depression.

"Any relaxation of restrictions is positive, but we remain cautious on the pace that the economy and earnings per share recovers," UBS analyst Pieter Stoltz says. 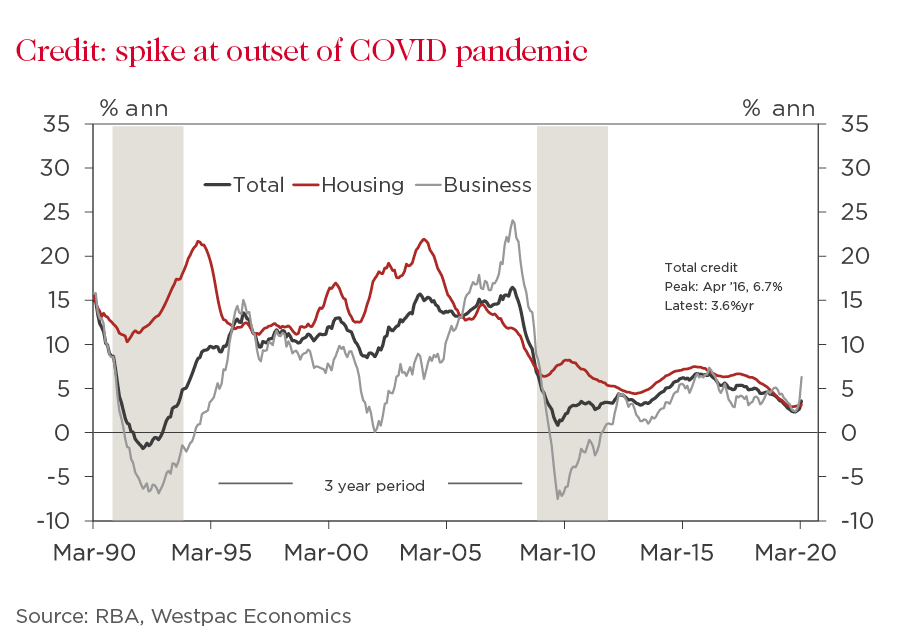 RBA Governor Philip Lowe expressed similar caution this week, saying a stronger economic recovery than expected was possible “if there is further substantial progress in containing the coronavirus in the near term and there is a faster return to normal economic activity”.

“On the other hand, if the lifting of restrictions is delayed or the restrictions need to be reimposed or household and business confidence remains low, the outcomes would be even more challenging than those in the baseline scenario,” he added, as he flagged unemployment would rise to 10 per cent in coming months.

With the second quarter – which we are currently almost mid-way through – widely expected to bear the brunt of the hit from the virus shutdowns, it will be some time before the economic picture officially becomes clear. First quarter GDP isn’t released until June 3, with second quarter numbers another three months later.

Hence the hot interest in anything more timely, such as the ABS’s new weekly payrolls data that this week suggested almost one million workers may have lost their jobs between March 14 and April 18. Other data for April is equally alarming, car sales slumping 48.5 per cent, the largest drop since records began in 1991 but hardly surprising given social distancing, job losses and shattered consumer confidence.

Based on the March credit and retail data we have, Westpac senior economist Andrew Hanlon says the COVID-19 pandemic had caused “multifaceted and non-linear” reactions. For example, consumer spending will “contract sharply” in the near term as employment and hours worked slump, but the initial reaction by households was the hoarding that boosted retail sales substantially. Other than food and booze, home office supplies and pharmaceuticals flew off the shelves, while spending on cafes, restaurants, and clothing crashed. 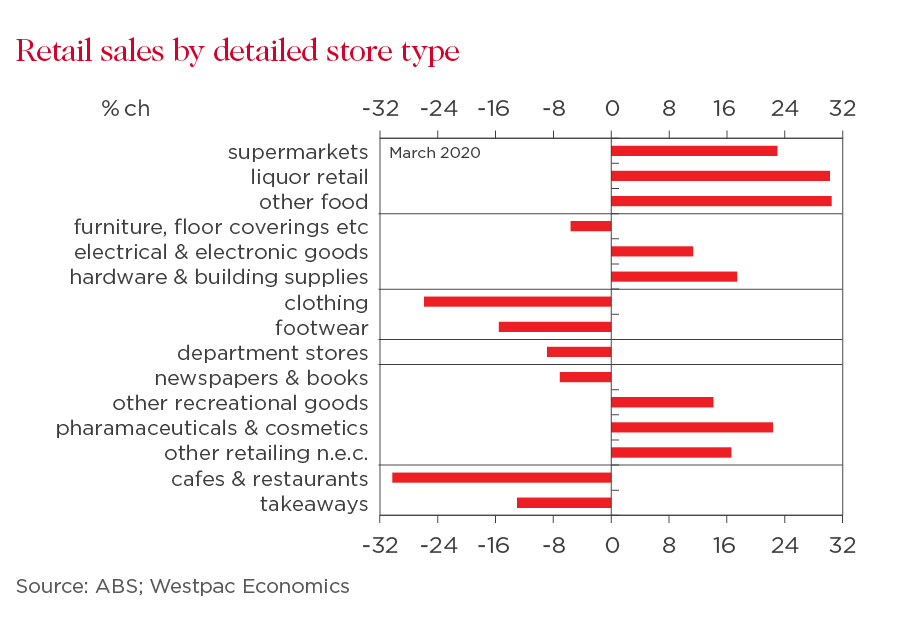 “Retail sales will be inherently volatile. We have had strong feedback on electronics, office, sporting goods, auto and at-home food continuing in April,” Citi analysts say.

There are parallels of these “multifaceted and non-linear” reactions playing out in credit growth, Hanlon noting businesses drew down on existing facilities in March to offset “intense cash flow pressures as sales collapsed” amid shutdowns and social distancing requirements.

As debate rages on about the best way to respond to the virus, a “Social Distancing Index” developed by global bank Citi last month comparing 45 countries found Australia’s experience is actually among the most mild, raising the question of how big the impact on spending and businesses would have been if restrictions were more akin to the toughest, apparently being Peru, the Philippines and New Zealand.

But on the health data to hand, it seems the decisions made so far have continued Australia’s run as the “lucky country”.

Only time will tell if that remains on the economic front – and if the bulls or bears are right.