How this downturn differs for housing market

In neighbourhoods across the country, Saturday’s are suddenly lacking a very Australian event: auctions.

In fact, even “For Sale” signs have somewhat gone into hibernation as more sellers hold off to see how COVID-19 and the related restrictions across the economy unfold.

Since the outbreak of COVID-19 has escalated and the bans come into force, auction numbers and clearance rates have fallen dramatically. And while many agents have enhanced or developed their digital offering, auctions are likely to remain extremely low over coming weeks and months, suggesting very weak turnover in the housing market. .

This, along with the broader uncertainties relating to COVID-19, is resulting in rising discussion about where dwelling prices end up when we get through this – which we must remember we ultimately will.

If we use history as a guide, dwelling prices registered annual declines in past downturns. 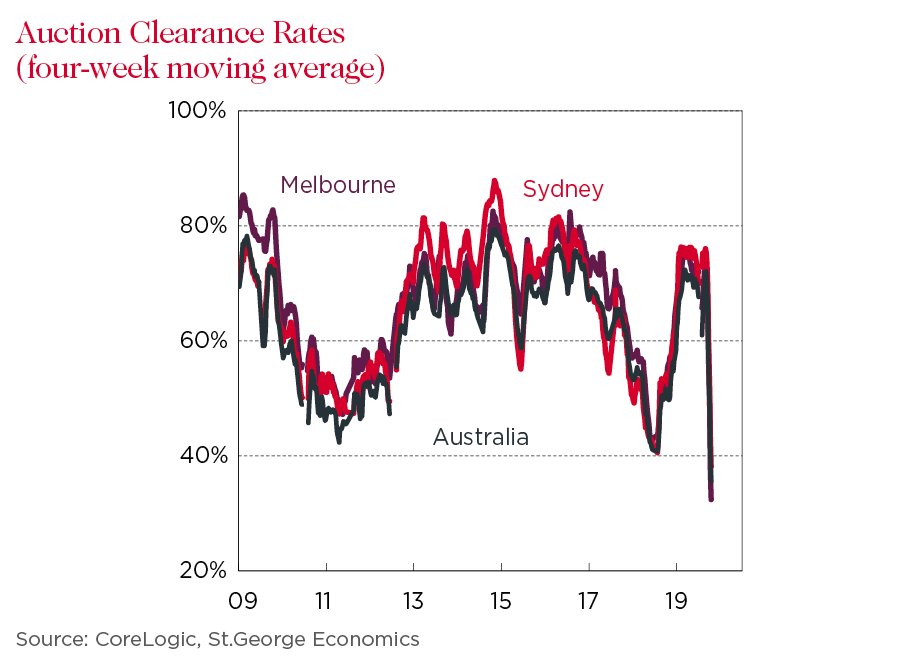 But they have actually been quite small, combined capital city prices easing on average just 0.3 per cent in 1991 when Australia last experienced a recession. In the global financial crisis in 2008 and 2009, average median dwelling prices across the capital cities actually rose on an annual basis. Why? One reason is that in downturns, the withdrawal of sellers usually helps prevent sharper falls in prices, which may yet occur again. During the GFC, there was also still a shortage of dwellings and interest rates fell.

However, I’d caution placing too much emphasis on past experiences given the COVID-19 recession is very different to prior downturns, being a very fast contraction driven by a health crisis, the likes we have not seen in our lifetime. Rather than the unwinding of asset bubbles or policy mistakes, this downturn has been  driven by government shutdowns of large parts of the economy as authorities try to contain the virus.

And it’s also widely expected to be much deeper than during the GFC. The RBA, for one, expects national economic output to fall by around 10 per cent over the first half of 2020 – the biggest contraction since the 1930s. 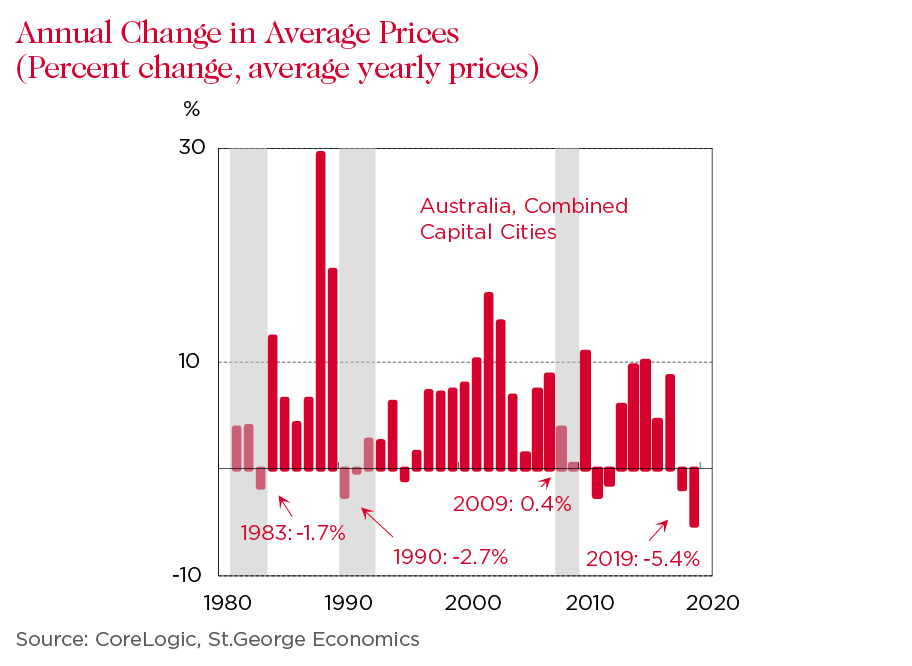 According to new, more timely data from the Australian Bureau of Statistics, employment fell by 6 per cent from March 14 to April 4. If this rate of decline in employment were to manifest in the regular labour force survey conducted monthly, it would suggest a very sizeable decline in jobs in April. We expect the unemployment rate lift to 9 per cent this quarter with a rise to the double digits not to be ruled out as GDP contracts a large 8.5 per cent. Of course, the federal government’s JobKeeper wage subsidy will go some way to cushioning the impact, however, incomes are still set to fall significantly.

One truism over time is that weaker economic growth and higher unemployment reduces housing demand, even when interest rates are at record lows like they are now. Moreover, heightened uncertainty about the economic outlook is likely to cause households and investors to hold back on big decisions like purchasing a home.

This is already playing out, with The Westpac-Melbourne Institute consumer sentiment index in April registering its largest monthly decline in 47 years and the time to buy a dwelling index falling a massive 26.6 per cent.

Another issue for the housing market is lower migration from overseas.

Australia’s strong population growth has helped underpin housing demand for many years. But it’s mostly driven by net overseas migration, which last year resulted in 230,000 people entering the country and needing shelter, equating to underlying demand of 89,000 dwellings over the year.

With borders closed, inbound migration will fall significantly in the near term and the amount of bounce back once the health crisis passes remains uncertain given the sharp projected rise in unemployment. In addition, the level of ongoing demand from foreign buyers – which has been high in recent years, particularly from China – remains unclear in a post-pandemic world.

More positively, the government, RBA and banks have provided significant support for households, including cutting the cash rate to 0.25 per cent and mortgage holidays for up to six months. This is likely to help reduce forced selling in the near term. Furthermore, sellers in healthier financial situations may wait for a better time to sell, reducing the housing stock available for sale and thus potentially limiting the extent of price declines.

Data out just today showed dwelling prices continued to unexpectedly grow in April. So some of the biggest falls feared in dwelling prices this year may not actually transpire.

All in all, we expect dwelling prices could fall by as much as 5-10 per cent this calendar year, a notable number but below other doomsday scenarios to make recent headlines. 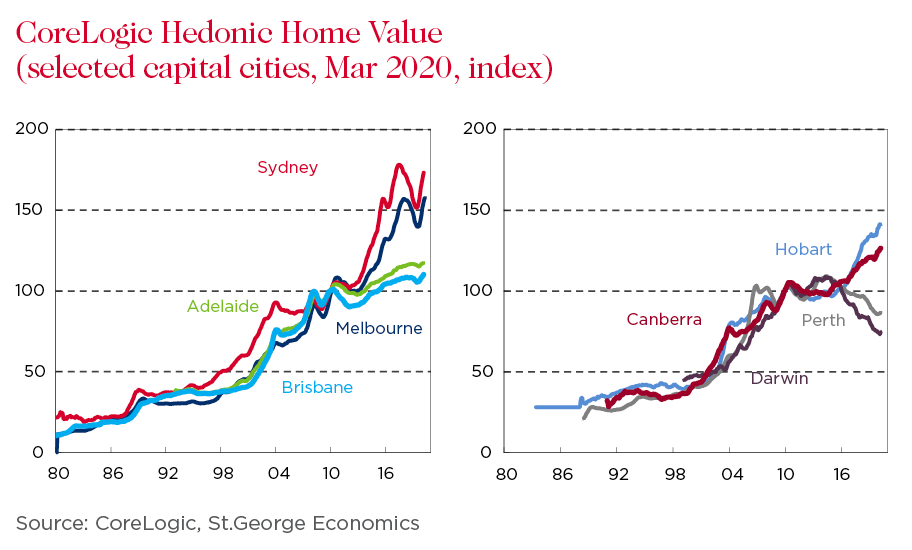 In better news, dwelling prices could rise very modestly over 2021 by 2 per cent amid a recovery in demand and confidence as the economy turns around and low interest rates underpin the market. The turnaround in 2021 relies on a second wave of infections not materialising and the global economy also effectively containing the virus over this year. As previous RBA research has highlighted, interest rate cuts can have a powerful impact on housing prices, and the declines this cycle are likely to ultimately provide support.

As for the rental market, there’s likely to be downward pressure on rents over the year ahead as vacancy rates tick higher.

As the Reserve Bank Governor has stressed, forecasting is difficult at the best of times let alone now, so it’s important to stress the greater degree of variability in these numbers than usual.

But after the COVID-19 crisis, Australians will be fairly familiar with uncertainty – and probably still love an auction.