China down but far from out as recovery revs up

It’s easy to forget it was only a couple of months ago that COVID-19 was widely considered likely to be a localised epidemic in China.

Of course, the virus swiftly became anything but, having now spread to more than 180 countries/regions, infecting more than 2.7 million people and sadly claiming around 190,000 lives.

Thankfully, positive signs are emerging in various countries. That’s particularly true for Australia as government-enforced restrictions across the economy – and some good luck – “flattens the curve”, some states even registering zero new cases on a daily basis in recent weeks.

While not all countries are experiencing the same outcomes, China, the original epicentre of the virus, remains very much in the spotlight from both an economic and health outcome perspective, given it is the world’s second largest economy and has been dealing with the impacts the longest. The economic consequences of the authorities’ complete lockdown of Wuhan and the Hubei province in January and February, as well as stringent restrictions on travel and trade elsewhere, have been severe, with annual GDP slumping from 6 per cent growth at December to a 6.8 per cent decline at March.

That’s not only a large adjustment but an historic one, marking the first contraction since 1976. 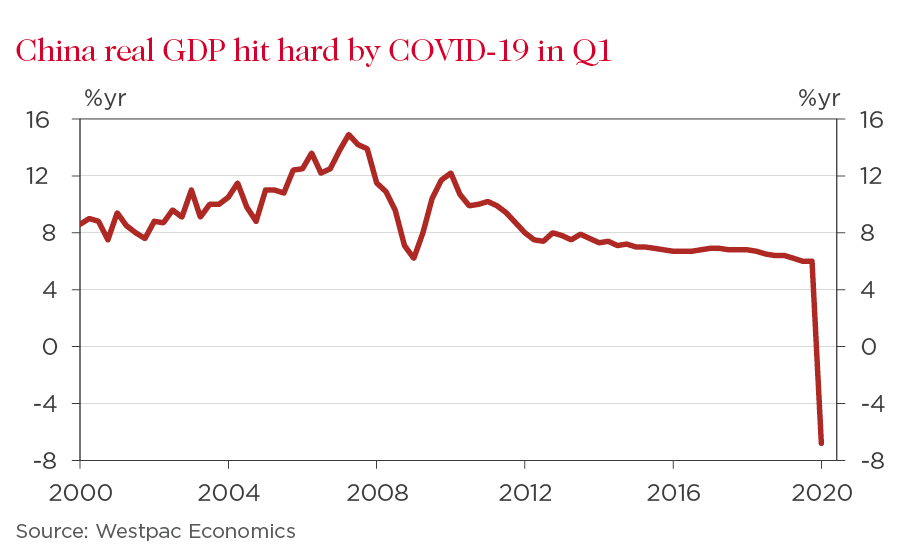 However, having seemingly brought COVID-19 under control and with precautions against the importation of a second wave now in place, China’s economy is poised to recover through the rest of 2020 and into 2021, boding well for Australia, with China our largest trading partner.

Indeed, partial data suggests that business has wasted little time in getting back to work. Anecdotally, industry in most regions was close to full capacity by the end of March, with official manufacturing data corroborating this view as activity bounced back. Likewise, credit data also pointed to a rebound in investment as new yuan loans surged to a historically-elevated level after February’s collapse.

This also bodes well for rising employment, and with it consumer spending.

So where to next?

As the Reserve Bank of Australia Governor pointed out this week, economic forecasting is difficult at the best of times, let alone in a once in a century event. Predicting outcomes for China is no different, arguably even more difficult.

As we have noted on numerous occasions, China’s approach to recovery in 2020 will be in stark contrast to the GFC. In line with the government’s priorities in recent times, we expect investment to be accelerated in partnership with local authorities and the private sector in a manner that maximises the quality of projects and the efficiency of their delivery.

To get the ball rolling, investment is likely across utilities and transport infrastructure, plus retail and health infrastructure, particularly outside of the tier one cities like Beijing and Shanghai, after COVID-19 highlighted deficiencies in medical care.

Domestic-focused private investment should also slowly strengthen in coming months assuming no material second wave of the virus, including across e-commerce and services, as businesses adopt technology and operational risk practices to mitigate the effect of any future shocks. China will also receive a material growth dividend from reduced imports from the rest of the world. 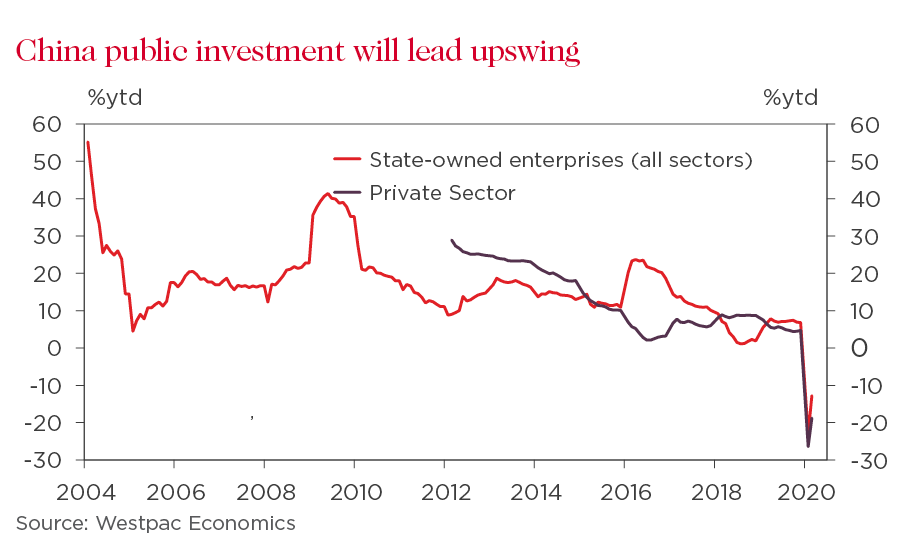 The investment boost is timely as the outlook for China’s externally-focused firms continues to deteriorate amid growing global headwinds, particularly in Europe and the US, where immense recessions are all but certain in 2020. Elsewhere, Singapore’s effective lockdown after a renewed spike in cases and India’s extension of its complete lockdown highlight ongoing health and economic risks.

As such, and factoring in the much-sharper decline in activity in the March quarter, we recently revised our 2020 China growth forecast from around 5 per cent to near 0 per cent in year-average terms, before recovering strongly to 10 per cent in 2021.

Assuming no second wave of the virus, the decline in activity has come to an end and the recovery commenced.

Risks to this outlook are large and numerous.

And much comes down to the virus, namely the time it takes to contain and then ease restrictions around the world, and the risk of repeated outbreaks. While several credible scenarios and associated forecasts have been published, we are all beholden to the whims of a pandemic none of us have ever lived through. Also, China will not be immune to the world’s ills, further fogging what comes next.

However, some things are easier to call with greater certainty.

Firstly, should China’s aggregate growth be further threatened, authorities won’t hesitate to react with more stimulus to accelerate growth. Second, China’s stronger government coordination and organization gives an advantage in controlling the virus until an anti-viral or, ideally, a vaccine emerges.

These factors, along with the less mature state of its economic development, suggest China’s economy can outperform. Yes, there is still much we don’t know about COVID-19, but an improving Chinese economy remains good news for Australia’s – and the world’s -- prospects through what will be a very difficult few years ahead.