How COVID-19's speed is squeezing economies

With the nation facing its biggest challenge in decades, Reserve Bank Governor Philip Lowe took to the lectern to outline the bank’s historic response to the COVID-19 virus rattling markets and economies.

In a near-empty room for “social distancing”, Dr Lowe committed to do “whatever is necessary” to achieve the bank’s momentous government bond yield target, sparking memories of Mario Draghi’s pledge to do “whatever it takes” to stave off the European sovereign debt crisis almost eight years ago. The following day, the big banks unveiled fresh support packages including six-month repayment holidays, before the Australian government stepped in with its second stimulus package over the weekend.

But surreally, that was now a week ago – a seemingly long time in the rapid-moving “Global Covid Crisis”, or GCC, as some have dubbed it.

“Analysts …are revising their estimates of global GDP growth for the first half of 2020 on a near-daily basis,” notes Standard & Poor’s.

In Australia, it’s taken a bit over a month for the economy to go from being wounded post the devastating bushfires, to hurtling towards its first recession in almost 30 years. Pubs, gyms and shops shut, borders closed, travel halted, city streets emptied, schools closing, and millions of Australians and businesses unsure what the next few weeks, let alone months, hold.

On Tuesday, the “extraordinary circumstances” spurred Westpac’s chief economist Bill Evans to lift his unemployment rate forecast to 11.1 per cent, more than double the rate today, following the expected loss of 814,000 jobs in the June quarter. That would put the jobs market in a similar situation as the last recession in the early 1990s when unemployment peaked at 11.2 per cent in December 1992, worse than during the GFC in 2008-09. Meanwhile, in the US weekly jobless claims jumped to 3.28 million, well above the prior peak of 695,000 back in 1982, according to new data overnight.

“Economic disruptions are set to be larger as the government moves to address the enormous health challenge which the nation now faces,” Mr Evans said of revisions to his forecasts released just last week. “That challenge is probably best summarised by a potential shortage of ICU beds in coming weeks if we do not significantly slow the rate of infection immediately.”

This tension confronting officials globally is palpable: severely shut down economies and suffer the immediate economic cost, or don’t and potentially suffer a larger health and human cost.

But with many moving parts in an incredibly difficult crisis, different views remain about the ideal way to respond to COVID-19, a virus from the family of Coronaviruses that doctors and scientists are learning more about every day after already infecting more than half a million people and killing around 24,000 globally in a matter of months.

“Almost every aspect of the GCC has been unique, from its cause (a virus) to the speed of financial markets’ collapse (swiftest since the Great Depression) to the global policy response (earliest and largest fiscal easings of any previous recession),” JPMorgan’s global strategists say.

So, from an economic perspective, what should Australians prepare for? 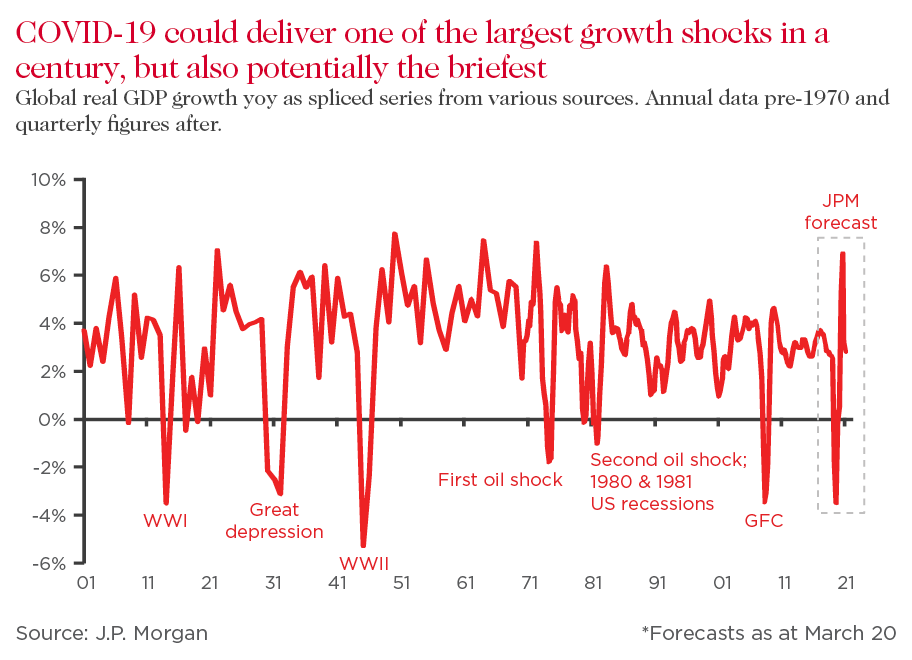 In line with the sad images this week of lines outside Centrelinks, Mr Evans says the most impacted jobs in coming months will be across services sectors already affected by government actions and closures to slow the virus’s spread: accommodation and food services, retail, and arts and recreation services, but also those in manufacturing, transport and warehousing, real estate services, construction and professional services.

More positively, sectors likely to be “reasonably resilient” include agriculture, mining, utilities, and finance and insurance, while healthcare – the nation’s biggest employer – public administration and telecommunications will likely increase employment.

An ABS survey of businesses released yesterday backed up these predictions, finding sectors like scientific & technical services, electricity and mining were among the least adversely impacted so far by COVID-19. Besa Deda, chief economist at St.George, said the survey -- taken between March 16 and March 23 -- however showed almost half of businesses have been impacted and 86 per cent expected to be in coming months.

“Businesses in the current environment are trying to preserve cash and mitigate costs to survive the crisis,” she says.

As to the hit to the overall economy, economists are bracing for a quick and hard shock, particularly in the June quarter where Mr Evans expects GDP to contract 3.5 per cent – worse than the 1.3 per cent contraction in 1991, and the declines in 1974 and 1979. However, he says GDP should return to positive growth in the final three months of 2020, up 1.6 per cent, as jobs also bounce back faster than in the past. The difference to prior recessions, he says, is that this one will hit services sectors much harder and so job losses will be much quicker.

“But so too can the rebound be much faster, all dependent on how many firms remain solvent,” he explains, adding he expects the unemployment rate to ease to 8.8 per cent by the end of the year after 350,000 jobs are added in the December quarter. 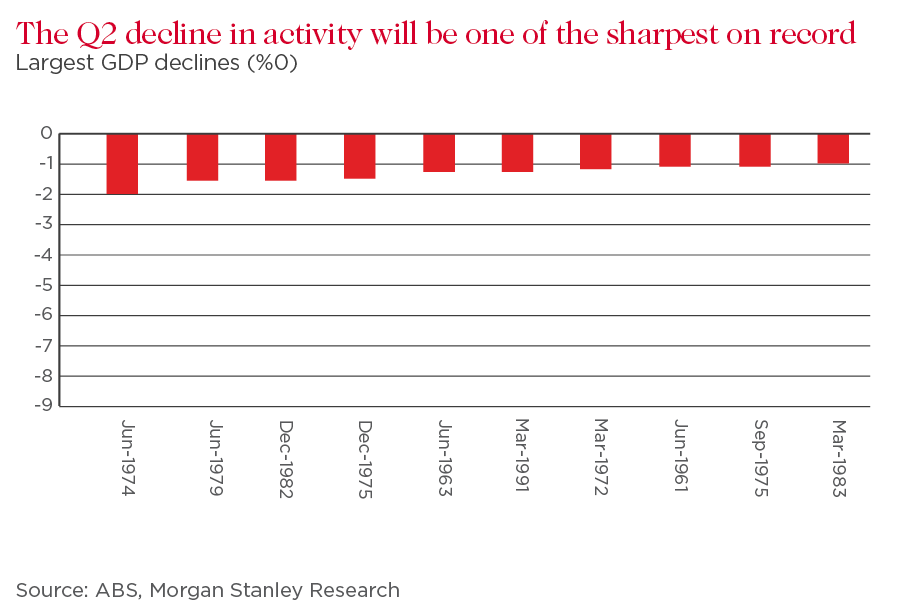 “In usual recessions it is often uncertain whether the economy is in recovery phase whereas the signals around government policy (particularly shutdowns) will be much clearer and households and business will respond.”

Chetan Ahya, chief economist at US global bank Morgan Stanley, says that even if the COVID-19 outbreak fails to peak in April or May and the global economy weakened more than expected, concerns of similar conditions to the 1930s were unlikely with the GFC experience “fresh in policymakers’ minds”.

“The good news is that unlike in 1929-33, we are already seeing an aggressive policy response,” he wrote this week, referring to the Great Depression when years of deflation and weakened demand in the US spread around the world.

“In contrast, the response to the current economic shock has been extremely aggressive.”

Last Thursday, the RBA cut rates to a record low and for the first time pledged to buy unlimited debt securities like bonds to keep the three-year government bond yield at the same level as the cash rate, 0.25 per cent. Dr Lowe added that a key part of the RBA’s COVID-19 response – which included a new funding facility for banks worth at least $90bn -- was working with the banks to help people get through this difficult, but hopefully “temporary”, period of job losses. In the week that’s followed, the banks moved quickly to support those affected, with Westpac’s Group Executive Customer & Corporate Relations writing in an op-ed yesterday that the bank had already received more than 44,000 home loan and 17,000 business customer applications for assistance.

“Things will get better,” Dr Lowe said. “As people who lose jobs over the next few months I’m hoping by the end of the year or early next year they’ll be finding them again, so we’ve got to create this bridge to when things are improving.”

With central banks running low on bullets after effectively slashing rates to zero, much of the attention has shifted to how governments respond with further fiscal support. Australia’s government has already flagged a third package on top of $83.6bn in the first two, while US lawmakers this week agreed on a $US2 trillion stimulus package, buoying financial markets.

But just as the pace of developments is forcing forecasters to constantly revise their numbers, the speed of response appears key in getting through the COVID-19 shock.

“Go big…and go now,” Citi’s global economics team led by Pernille Henneberg wrote this week ahead of the US package, adding that the GFC and European debt crisis showed that “too little too late yields a long period of sluggish growth”.

“What does the end game look like?” S&P’s analysts asked.

“Speed seems of the essence, as is fostering a setting in which the economy – labour markets and supply chains based on small and medium-sized businesses, in particular – can get back to normal quickly once the pandemic passes. The longer it takes for governments to implement fiscal support, the more damage there'll be to the economy.”

The COVID-19 race is only speeding up.