David Burroughs takes “practicing what you preach” to a whole new level.

Around 10 years ago, the avid surfer, fisherman, dad, kids’ sports enthusiast, reader and podcast listener made a major deliberate decision: he’d only ever work 3.5 days a week in any one position.

“I’m very committed to my work/life boundaries,” he quips.

After 20 years as a specialist psychologist consulting internationally to large corporates, the government and military, Burroughs joined Westpac in August 2018 as chief mental health officer. While different types of employee wellbeing roles in large companies have seemingly expanded in the past few decades, he believes his “CMHO” role is the first of its type, but likely to become more common in the next few years.

“I don't know of any other organisation that’s appointed someone with professional qualifications into a role with responsibility to develop the strategy for employee mental health and support how we work with vulnerable customers,” he says.

“But there is a very big appetite for evidence-informed approaches to support mental health and for more sophisticated and integrated approaches to prevent mental ill-health, which is a significant departure from what many organisations have been doing, so I think you’ll start to see similar roles appearing to help drive that change.”

The scope of the challenge was laid out in the draft report released today by the Productivity Commission following a year-long inquiry into the effect of mental health on people’s ability to participate in communities and workplaces and the flow on to Australia’s economy.

"Mental ill-health has huge impacts on people, communities and our economy but mental health is treated as an add-on to the physical health system. This has to change," Productivity Commission Chair, Michael Brennan says.

Burroughs says, although workplace mental health has been “very misunderstood” for a long period of time, a steep rise in societal concern about the prevalence, impact and cost of mental ill-health could start to catalyse action. He says real change will only happen by swinging the pendulum towards mental health being viewed as a positive concept, understanding that mental ill-health does not discriminate or preclude someone from being a top performer and that the workplace itself can be a determinant to mental health.

“The first thing people think about when you say “mental health” is negative – it’s depression and anxiety,” he says. “But if you talk about physical health the first things are fitness and wellbeing – positive. A big part of what we need to do is to change the narrative.” 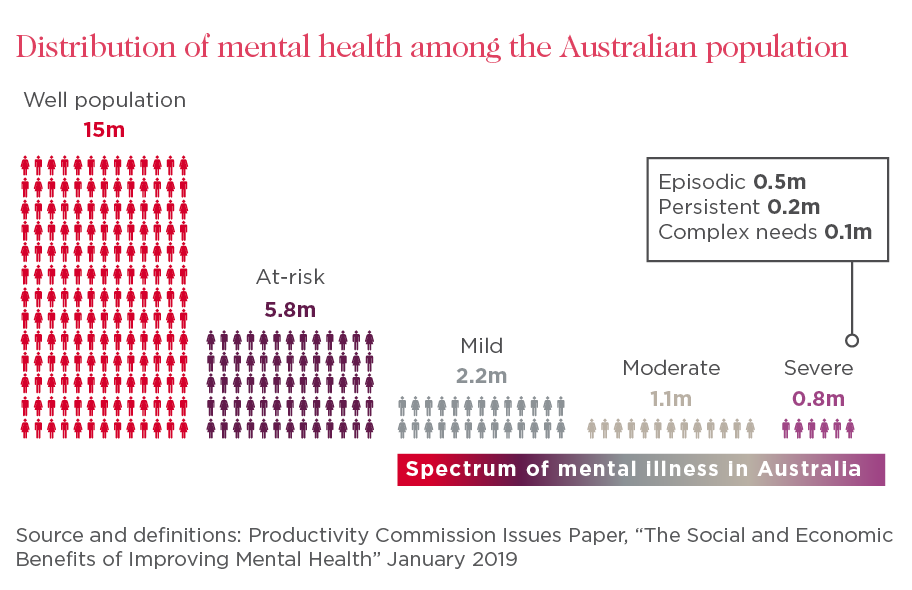 Burroughs says part of the issue is that organisations have tended to focus on finding and fixing symptoms of mental ill-health in individuals, rather than preventative initiatives within the workplace environment to promote positive mental health.

“By developing an environment where there's good supportive leadership behaviours and high levels of civility, high levels of psychological safety and trust, and where people have got the ability to meet the demands of their roles, and where we encourage early help seeking behaviour, that's how we promote positive mental health, and that's how we help prevent mental ill-health,” he says.

Along with the right set of underpinning policies, training and assistance programs, Burroughs says many organisations simply need to start by resetting some basic expectations in the workplace.

“It can be as simple as setting boundaries around out of hours text messages and emails, around how to have effective management of devices and time, how we give people time to reset and recover, even saying goodbyes and hellos and being more civil to each other,” he says.

“I’m seeing senior executives no longer eating lunch at their desk, they go out and walk a couple of laps each day, and more people are introducing what we call the “digital sabbath” where devices are shut away for a day to reset.”

For organisations that get this right, in addition to being a generally better place to work, there could also be massive economic upside.

The Productivity Commission says some studies have estimated that the cost of unhealthy workplaces to business in Australia is up to $12.8bn each year driven mainly by absenteeism – where people are not at work due to mental ill-health, and presenteeism, or when people have lower productivity when at work. In addition, workers’ compensation claims due to mental ill-health are associated with much more time off work and higher average claim costs than other types of claims.

While Burroughs believes the intensifying spotlight on workplace mental health is positive, his biggest concern is for organisations to ensure the efficacy of the programs they roll out.

“For the work we do, it's got to be evidence-based and matched to our unique psycho-social climate, because financial service is different to a lot of other industries,” he says.

“There's an increasing level of complexity in everyone's roles, the work environment is in a bit of flux with new technologies and ways of working, and there are a lot of external pressures – that requires a different approach in order to meet the psychological demands, and a lot of work.”